A Muslim man butchered a Coptic Christian woman and her toddler son with a machete—“as if he were slaughtering chickens,” said eyewitnesses.  He also unsuccessfully tried to slaughter the Christian woman’s young daughter.

The facts are currently sparse.  The incident occurred on April 3, 2021, in the streets of Minya Governate, Egypt.  The name of the murderer, a tuk-tuk driver, is Abu Muhammad al-Harami; his victims are Mary Sa‘d and her six-year-old son Karas.

When their paths crossed in the streets, he made threatening and derogatory comments to the mother; she responded by saying that she would report him to police—at which point Abu Muhammad leapt on Mary with his machete, butchering her and her son.  Her four-year old daughter fled and hid, as did the murderer, who was reported to be arrested four days later.

Egyptian media and authorities are currently saying that people should not jump to conclusions concerning the motive of the murderer; the latest explanation is that the crime had nothing to do with the woman’s Coptic identity, but rather was the unfortunate outcome of the man’s attempt to steal her golden necklace.

The reality, however, is that there have been many seemingly random attacks on Copts in the streets of Egypt.

In late December 2020, for example, two Muslim brothers went on a stabbing spree against Christians, killing one man and critically injuring two others.  Authorities said the brothers were in mourning and upset, because their mother had died earlier that day.  But as a local Coptic priest said, “what does the death [of the murderous Muslims’ mother] and the Copts have to do with each other??”  He added that the two brothers had for years been in the habit of verbally harassing and insulting Christians.

That same year, on January 12, 2020, a Muslim man crept up behind a Coptic woman walking home with groceries, pulled her head back with a hand full of hair, and slit her throat with a knife in the other hand.  Catherine Ramzi was rushed to a nearby medical center, where her throat was sewn with 63 stitches; doctors told her she came within an inch of dying.  It is believed that he may have identified her as a Christian for not wearing a shawl around her hair or for having a cross tattoo on her wrist.

Two days before that attack, on January 14, 2020, another Muslim man tried to slaughter a Christian man with a sharp box-cutter in a public space; he managed only to slice off a portion of the Christian’s ear.  Although this attack was like the others also dismissed as a generic “crime,” the culprit, Muhammad ‘Awad, was actually arrested and, when questioned as to why he tried to murder the Copt, he confessed that he did not know him, but that he simply “hates Christians, for they are from among the People of Lot, and the [death] penalty must be applied to them, for they commit indecencies.”

Whatever the true motive behind Abu Muhammad’s slaughter of Mary Sa‘d and her small child, here, at any rate, is the latest account of a Muslim butchering Christians in Egypt. 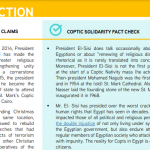 FACTS vs. FICTION: Coptic Solidarity’s Fact-Checking of the ‘Religious Freedom and Diversity’ Document Issued by the Embassy of Egypt in the U.S.A.CS Releases & Articles 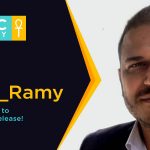