Coptic Solidarity hosted its 2nd Annual Modern Coptic Martyrs Remembrance Day (MCMRD) on October 5, 2017, in the US Capitol. Coptic Solidarity thanks US Representative Chris Smith (R-NJ) for sponsoring this event and hosting it in the US Capitol. While a last-minute scheduling conflict prevented Rep. Smith from joining the event, he stopped by afterwards to express his support for Copts and this new initiative which strives to honor these martyrs and create greater awareness of the persecution Copts suffer in Egypt.

Lindsay Griffin – Director of Development & Advocacy
Coptic Solidarity’s Advocacy and Development director, Lindsay Griffin, opened the event with a presentation that put commemorating Modern Coptic Martyrs in context of current events in Egypt. The Egyptian government has severely curtailed civil society, retained and advanced discriminatory policies against Copts, and failed to protect them against violence perpetrated by Egyptian fundamentalist Islamists. While seeking US partnership in the fight against terrorism and the Muslim Brotherhood, el -Sisi has simultaneously given free rein to the Salafis with their equally intolerant thinking, which promotes bigotry and violence against Copts. The result is perpetuation of a culture of hatred and impunity against Copts which remains a fertile ground for continuing persecution.

Griffin cited Mr. Behey eldin Hassan’s, Director of the Cairo Institute for Human Rights Studies, statistics which document the rise in the number of incidents against Copts during Sisi’s rule explaining the urgent need for advocacy and awareness. Ms. Griffin also recounted details of the Maspero massacre, which occurred on October 9, 2011, during which the Egyptian Army brutally murdered 28 individuals (27 were Copts) for peacefully protesting the destruction of a church in Aswan. Maspero Massacre is emblematic of government persecution of its religious minority and suppression of their political voice. It serves as an anchor incident around which Coptic Solidarity organized the MCMRD.

U.S. Representative French Hill (R-AR)
Congressman Hill expressed gratitude for the opportunity to join Coptic Solidarity in honoring modern Coptic martyrs and assured the audience that the US Stands with persecuted Christians in the Middle East. Rep. Hill recounted meaningful moments from a trip to Egypt earlier this year. He recognized the special relationship between the US and Egypt noting that Egypt’s stability is vital to the region and in the efforts against terrorism.

Rep. Hill recognized El-Sisis’s symbolic gestures such as visiting Coptic Christmas mass and passing the new church law, but indicated that these efforts are not enough. He urged Egypt to end the culture of impunity in which most perpetrators who attack Copts are not brought to justice. Hill noted that the most disturbing attacks against Copts are those carried out by fellow Egyptians. Rep. Hill stated his intention to introduce a resolution in the House of Representatives soon that would address the issue of impunity in Egypt. He stated that the government is not responsible for the individuals who carry out attacks, but they are responsible to ensure perpetrators of attacks are held accountable for their actions.

Lastly, Rep. Hill called on the Egyptian government to reform primary school education and to promote a positive image of Copts in Egyptian culture and media. He referenced the importance of NGOs and his support and participation in Rotary International calling on Egypt to promote the positive role that NGOs can play to improve society.

Mr. Mansour Al-Hadj – Director of Reform, The Middle East Media Research Institute
Mr. al-Hadj shared how he was born and raised in Saudi Arabi and indoctrinated in Wahhabism from a young age. He continued to witness persecution of Christians while studying in Chad and Sudan. His extremist background led him to dedicate his work to education and promoting voices who advocate tolerance, peace, and understanding in the Middle East and in Africa. Al -Hadj explained that atrocities committed against minorities, both Christian, Muslim and others, can be traced to the ideology of hate that the perpetrators are raised to believe.

Al-Hadj identified the main problem minority groups face as either Islamism, or dictatorships. Both thrive on discrimination and intolerance and fracturing societies. It is not just a Muslim vs. Christian issue, but sometimes Islam vs. Islam due to the funding and support by Gulf states. In conclusion, Mr. al -Hadj made three recommendations:

U.S. Representative Brad Sherman (D-CA)
Congressman Brad Sherman expressed a longstanding support for Copts and those he represents in Northridge, California from St. Mary’s and St. Athanasius Churches. He honored martyrs of the past and discussed the need to stop the process that creates martyrs in future.

Congressman Sherman also noted the many bills and resolutions he has co-sponsored and of which he has been the lead Democrat. The initiatives include the Coptic Churches Accountability Act and several initiatives to support Christians, Yezidis, and other minority groups in Iraq and Syria.

Congressman Sherman also discussed the most recently passed bill regulating church construction and repairs in Egypt saying that church building should be regulated on the local level, not by governors. While he recognized the rebuilding of churches destroyed in Egypt’s “Kristallnacht,” he maintained that it is critical to protect churches in the future, and more importantly to protect Coptic people. Congressman Sherman noted that he told President el-Sisi that it is important to Americans that Copts be protected and be full citizens of Egypt.

Lastly, he discussed his efforts to get two Muslim Brotherhood influenced organizations onto the official US list of terrorist organizations.

Fr. Theodorus Daoud – Archpriest, The Greek Orthodox Church
Fr. Daoud, a Greek Orthodox priest, provided an insightful spiritual component to the event discussing how in Pharaonic times Egyptians believed strength came from ruling power. But, after becoming Christians, the Coptic descendants understood to humble themselves like their Lord, and that willingly sacrificing their lives for their brothers and sisters is not weakness but true power and transcendent divinity. He explained how Egypt provided sanctuary to those fleeing persecution in the past, but now they need help and few are willing to come to their aid.
Fr. Daoud made an important observation that Egypt has both dead and living martyrs. Those who have been killed simply for being Christians are the ones typically recognized. But there are also living martyrs killed daily and slowly through social and political persecution.

Noting how the US spends billions of dollars in Afghanistan to spread seeds of freedom., Fr. Daoud wondered “Would it not be much cheaper to invest in the already flourishing trees of freedom in Egypt and in the Levant, the Christians who already share US values of personal freedom?” The US cannot ignore such injustice, but must embrace these victims such as the widows, orphans, and families of martyrs. He urged the US to invest in humans, not in regimes. “Human values remain, but regimes come and go.”

Fr. Daod concluded by urging individuals to “remember every day the lives of those who think like you, and believe like you, but are not allowed to live like you.”

Lou Ann Sabatier – Director of Strategy and Communications, 21st Century Wilberforce Initiative
Ms. Sabatier opened her remarks explaining that one of best gages of a county’s level of freedom is the security the majority affords minorities. For Egypt to claim religious pluralism, it must extend protection equally to everyone. She said that Americans should not ignore abuses in countries considered allies. Ms. Sabatier discussed the difficulties in creating awareness and action for Copts when the Egyptian government controls the media, noting a recent report stating that Egypt imprisoned the most journalists only behind Turkey and China. She said the daily discrimination against Copts poses the greatest threat to their future. Ms. Sabatier asked, “How do you raise awareness without the media?” She offered three policy recommendations:

Ms. Sabatier concluded by noting the huge number of Copts who have emigrated to the West and Sub-Saharan Africa. “Could Egyptian Copts that have endured 2,000 years, sometime become extinct? The answer, tragically, is yes.”

Mr. Samy Gerges – Senior Program Officer, Freedom House
Mr. Gerges discussed some areas of discrimination against Copts that are not as frequently noted. One such area is in business. He explained how Copts face extra difficulties such as in importing raw materials and how at times they are forced to sell their businesses. Another area where Copts face discrimination is in education. Gerges cited an example of a Coptic girl who received a 0% on her qualification exam simply for being Christian which prevented her from attending university. He also noted that the Coptic Orthodox Church tries to minimize the suffering of Copts which exacerbates the state -sanctioned persecution and discrimination of Copts.

Gerges concluded saying that despite all their suffering, Copts still play an important role in Egyptian society. They are well integrated and are successful businessmen and professionals who provide essential services to Muslims. Copts are on the front lines challenging extremist ideas. They were the first to talk about citizenship rights in Egypt. Words for this did not exist in the everyday language until Copts raised the issue. Copts were the first to advocate for persecuted Baha’i and Shi’a in Egypt. Copts advocate for the human rights and religious freedom of all Egyptians. 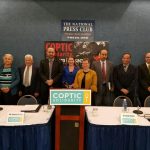 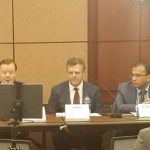