Two Muslim brothers recently went on a stabbing spree targeting Coptic Christians in Alexandria, Egypt; one man was killed and two others were severely injured and hospitalized.

Last reported on Dec. 13, the brothers had been arrested and were to be detained for four days, pending an investigation.  According to authorities, they went on their murderous stabbing spree because they were “upset” that their mother had died earlier that day, on Dec. 10.  Even the state appointed prosecution denied that their actions had any “religious or sectarian” motivation.

However, Fr. Michael Gamil, of the local Coptic Church, witnessed the crime and offered a different account.  He said that the two brothers—Nasser Ahmed Muhammad and Ali Ahmed Muhammad—specifically targeted and attacked Christian shopkeepers on the street directly behind his church.

“The matter began with insults and curses to the shopkeepers for being Christians and Copts,” explained the clergyman.  The Copts present responded with patience.  Then, when one of them, Ramses, quietly went to close and lock his shop door, they lunged at and stabbed him with knives.

Ramses’ brother, Adel, who ran a grocery store nearby, saw what was happening, rushed to his brother’s aid, and was also stabbed for his efforts.  The Muslim brothers then barged into the clothing shop of another Copt, Tariq Fawzi Shenouda, and stabbed him in the torso, near his heart.

All three men were hospitalized with serious injuries in intensive care; Ramses died of his wounds.

Not content, the two Muslim brothers then entered the same church that Fr. Michael serves in and insulted and cursed another priest, the partially blind Fr. Paul.

Fr. Michael continued by asking the all-important question: “They say they started cursing the Copts because their mother died; and two years earlier, they cursed the Copts because their brother died: what do (family) death and the Copts have to do with each other??”  He underscored that the two brothers have for years been in the habit of verbally harassing and insulting Christians—though clearly, they have taken their hate to another level with this latest stabbing spree.

The authorities know full well that this murderous incident was motivated by religious hate, concluded Fr. Michael, but, as usual, are reluctant to admit it as doing so would damage Egypt’s reputation.  “Copts were peacefully working in their stores, and these brothers barged in saying ‘you infidel Copts.’  That is clearly sectarian.”

Photo: Ramses, a victim of the killing spree 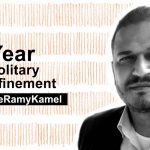 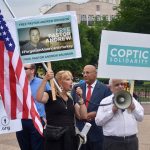