Egypt’s version of the Hippocratic Oath, which all of the nation’s doctors—both Muslim and Christian—are required to take, contains wording that is not unlike the Islamic confession of faith, Coptic Solidarity has learned.

The problematic section comes at the very end, where the oath-takers recite “Allah and his Prophet.”

Whereas most Copts have no difficulty acknowledging “Allah”—which is just Arabic for “God”—“his Prophet” is more problematic, as it is an acknowledgement that Muhammad is indeed the prophet of God.  Any Coptic physician publicly reciting this oath places his or her religious identity in danger, as this would represent an implicit conversion to Islam.

This month, however, Dr. Hala Ziyad, Egypt’s Minister of Health, newly appointed by President Sisi, issued a decree that requires doctors in all health establishments (hospitals, clinics, etc.) to recite the oath on a daily basis, so that all hospitalized Egyptians hear it. 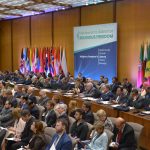