Coptic Solidarity will host a remembrance event at the National Press Club in Washington DC on October 5, 2016 at Noon Eastern Time in the Zenger Room. This event will initiate Coptic Solidarity’s first annual Modern Coptic Martyrs Remembrance Day which commemorates the fifth anniversary of the brutal murder of Christian Egyptian citizens during a peaceful protest, and the many other Coptic Christians martyrs in Egypt in modern times who have died for their faith in the increasingly hostile environment towards religious minorities.

This event is open to the media and general public.

Background
Local Islamists demolished a Coptic Orthodox church near the city of Aswan. In protest, on October 9, 2011 Coptic Christians and fellow Egyptian citizens decided to peacefully march to the Maspero building in Cairo, which houses the state-owned television and radio center. This peaceful march included men and women, young and old.
As the demonstrators neared the Maspero building, the Egyptian Army began firing live ammunition at the peaceful crowd without any warning. Four armored personnel carriers (APCs) proceeded to drive in zigzag patterns through the crowds in an effort to run over as many demonstrators as possible. Adding to this egregious assault, the State-run television simultaneously aired an urgent message claiming that Christians were attacking Egyptian Army soldiers and urging “good Egyptian citizens” to defend the military.

The brutal confrontation left 28 demonstrators dead and 327 injured. Twenty-seven of those killed were Copts; 14 of them were crushed to death under the armored vehicles.

Despite widespread evidence and autopsy reports performed at the Church’s request and with the agreement of the victims’ families confirming the causes of death, the massacre is still not officially recognized as such by Egyptian authorities. Official investigations have been unfruitful, with only two low-ranking soldiers – who remain free and continue to serve in their army units – found guilty of a misdemeanor of “involuntary killing”. In addition, a Coptic protestor was convicted for “aggression against army personnel.”

Coptic Solidarity also has launched a campaign where concerned individuals can advocate via Coptic Solidarity’s online advocacy campaign. This campaign provides a sample “Letter to the Editor” and pre-set targets for U.S. and international media. The purpose of this campaign is to urge more media outlets to publish articles regarding the event in order to assist with creating awareness and achieving justice.

Coptic Solidarity has created an online resource center where churches and individuals can find all the necessary tools to host a prayer event or any other commemorative activity. The resource center includes a church bulletin insert, fact sheet, an educational presentation, an advocacy campaign, and photos and videos.

Coptic Solidarity urges all concerned to stand together demanding from Egyptian authorities justice for the victims of Maspero, protection of Copts from the rash of violent attacks and chronic discrimination against them and the institution of full and equal rights to Copts as citizens in their homeland. 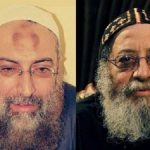