Last night, I watched, like millions of Copts from across the world, the Liturgy of Holy Nativity that was broadcast from the Cathedral of the Holy Nativity of Christ from what is called Egypt’s New Capital of Egypt, which was officiated by Pope Tawadros II. And how embarrassing it was!

The church was full with Egypt’s political and military personnel, occupying the front seats, and in the back Muslims, men and woman, who were supporters of Abdel Fatah al-Sisi, Egypt’s President, all raising his pictures and banners hailing the secular ruler. Chaos reigned, with all chatting to each other, speaking on their mobiles, laughing and waiving at the cameras. Then the prayers got stopped by the appearance of President al-Sisi; Pope Tawadros II going out to receive him, and then the President and the Pope, followed by the bishops of the Church, go in, and everything was interrupted by al-Sisi delivering a speech in which he congratulated the Copts and emphasised the unity of Egypt’s two religions.  Security forces filled the space and camera men roamed here and there each keen about registering the still photographs of every move of the President and his men. Then Pope Tawadros II reading from script mentioning and thanking all who congratulated or visited him on the occasion from Egypt regime’s political and military echelon.

It was more like a political festival than a solemn religious one, celebrating the birth of the incarnated Son of God for the salvation of mankind from its sins.

In a word: the service lost its dignity, and was not more about Christ but about al-Sisi in a large part of it. And where has the zeal of God’s House been? It has ceased to consume the Copts.

In the Gospels we learn of Christ’s story of Cleaning the Temple: Jesus, on entering the Jerusalem Temple, and seeing the money changers and merchants, was consumed by God’s zeal, and overturned the tables of the money changers and seats of those who sold doves, and said to them, “It is written, ‘My house shall be called a house of prayer; but you are making it a den of robbers.’” (Matthew 21: 12-13) The same story is recorded in Mark 11:15, Luke 19-45-48, and John 2:13-16. His disciples, as John tells us, “[r]emembered that it is written: ‘The zeal for your house will consume me.’” (John 2:17) It must be said here that the incident must not be taken to justify violence: Origen saw the Cleansing of the Temple as metaphorical; John Chrysostom admitted its literality, but points to the facts that Jesus used the whip against the merchants and the beasts to show His divinity, and that He should not be imitated.[1]

No one asks for a violent reaction from the Copts, least towards the attendant Muslims who shouldn’t be blamed for our transgressions and failings. But the event, which seems to be repeated every year as a political festival in a large degree must not happen. The zeal of God’s House must consume the Copts and put pressure on its religious leadership to stop turning the Birth of Christ into a political festival – politics must be done outside the Church, and never be incorporated into, or allowed to interrupt, the Liturgy. The focus must be on Christ, not al-Sisi. Period.

This is a principled position: the same must be said even if al-Sisi were a Christian; if Egypt were a Christian country, or the Copts have their own sovereign nation. The situation must be the same whether our sovereign is Constantine the Great or any Muslim ruler. The Copts must have dignity and the zeal of God’s House must always consume them with fire in their belly to prevent such events from taking place, and light to guide them on how to conduct themselves in their religious festivals and feasts.

______________
Photo Credit: Egypt’s President Abdel Fattah al-Sisi and Pope Tawadros II, the 118th Pope of the Coptic Orthodox Church of Alexandria and Patriarch of the See of St.(Reuters) 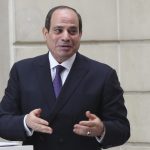 In Egypt, new signs that the regime’s human rights strategy is to violate themSelected Opinion 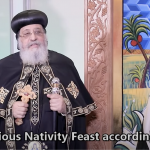