CAIRO — For years, Western governments and human rights groups have urged Egyptian President Abdel Fatah al-Sissi to ease his crackdown on dissent, which has seen the arrests of thousands of people, including activists and journalists.

Now, after Sissi unveiled the country’s first-ever human rights strategy last month, some advocates are cautiously optimistic and say he may be making incremental progress on human rights. Others say warily that this signals little more than a desire to quiet foreign pressure.

Sissi released the document days before the Biden administration announced it would impose new human-rights-related conditions on $130 million of the around $1.3 billion in assistance the United States provides to Egypt each year.

The conditions include that Egypt end prosecutions in Case 173, which investigated civil society and rights groups, and either drop charges or release 16 individuals whose names have been raised by U.S. officials with the Egyptian government.

Alaa Roushdy, Egyptian assistant minister of foreign affairs for human rights, said in an interview that the new strategy was developed over several years and was not released in response to concerns of the United States and other foreign powers. It is a “purely national” initiative, he said.

The document spans more than 70 pages and outlines a government plan to safeguard civil, political, social, economic and other human rights over the next five years. The strategy notes some key concerns raised by rights groups, including over pretrial detention, which advocates say has been used to jail defendants indefinitely.

“It’s a good step. It’s positive,” said Mohamed Anwar al-Sadat, a former lawmaker who was outspoken on human rights abuses. The nephew of former president Anwar Sadat, he was expelled from parliament in 2017 amid claims he circulated disparaging comments about it to foreign organizations and accusations he forged colleagues’ signatures. He now leads the Reform and Development Party and coordinates an independent group that lobbies for prisoner releases.

The government strategy offers an opportunity, he said, to hold officials accountable for carrying out the ideas presented. “We need to see something happening on the ground,” he said.

Negad el-Borai, a human rights lawyer who has been investigated under Case 173 and attended government meetings on the development of the strategy, said it could be “a weapon in our hands to push for more change and support for human rights.” But he is taking a wait-and-see approach. “All that I can tell them is: ‘I’ll keep my eyes on you, I’ll see whether you are truthful or not,’ ” he said.

This week, state media reported that lawmakers also approved rebuilding the country’s National Council for Human Rights, whose board will include Sadat and other figures.

Roushdy, the assistant minister, said the strategy signals that there is “very strong political will” to prioritize human rights. Officials studied similar strategies from more than 30 countries, he said, including Finland, New Zealand, Kazakhstan, Azerbaijan, South Korea and Tanzania, as part of their research process. “Everything in the strategy is because we are listening,” he said.

The Biden administration’s move to condition some U.S. assistance on human rights progress has been criticized in several quarters for failing to go far enough.

“It’s naive and timid,” said Sherif Mansour, Middle East and North Africa program director at the Committee to Protect Journalists who was also a defendant in Case 173. “I think giving 90 percent of a blank check is still a big blank check.”

On the campaign trail, Joe Biden pledged that he would not write any more “blank checks” to Sissi. And for the first four months of his presidency, Biden did not so much as extend the gesture of a phone call to his counterpart in Cairo, despite Egypt’s role as a crucial ally in the region. Sissi gained some goodwill in Washington when Cairo helped broker a cease-fire to end fighting between Israel and the Hamas militant group in May. Last week, U.S. national security adviser Jake Sullivan met with Sissi in Cairo after trips to Saudi Arabia and the U.A.E.

Activists had hoped that Biden’s tough rhetoric on human rights meant the administration would attach conditions to more than $130 million in aid.

“My worry is that there will be a couple of cosmetic changes made but that there will still be tens of thousands of political prisoners at the end of the year,” Sen. Chris Murphy (D-Conn.), a member of the Senate Foreign Relations Committee, said in a phone interview. “The danger of pursuing a policy focused on a certain set of people getting released is that it absolves the regime from replacing them with an equal or greater number of people who are being put in prison while some are being let out.”

Mahienour el-Massry, a human rights lawyer, was one of several detainees released from an Egyptian prison in July. She was held for 22 months in pretrial detention while facing allegations she had spread “false news” and collaborated with a terrorist group. Massry said she still does not know the exact circumstances that led to her being freed.

“All I could think of is that it was to sugarcoat their image, nothing more, because one way or another, legally speaking, we were supposed to be released long ago, and so were many others,” she said.

Massry said she had thought the government might use her release to “send a message that there is a change that is going to happen.” But lack of significant action in many other cases has left her skeptical about whether the new human rights strategy will spur real progress. “Release real numbers of people, look into the cases of everyone,” she said.

Just after the strategy was launched, Patrick George Zaki, a gender rights researcher at the Egyptian Initiative for Personal Rights who has been held in pretrial detention since February 2020, was indicted on charges that he spread false news domestically and abroad in a 2019 article. He appeared in court last week, but his hearing was postponed until December.

Hossam Bahgat, executive director of EIPR, said that while the new strategy may improve some people’s lives, his organization’s predicament is a “perfect example of the disconnect between the discourse and the reality.”

“We’re being asked to acknowledge the government’s seriousness about human rights in the form of this document they launched,” he said, while also defending “one of our researchers who is facing up to eight years in prison for having written an article.”

Bahgat himself is also facing a November court date over a tweet he posted last year in which he criticized the deceased head of the country’s National Election Authority. The State Department has urged Egypt not to target Bahgat.

Roushdy declined to comment on individual cases but said the gradual implementation of the strategy has already begun, noting that it is “not a magical wand” but a long-term plan. 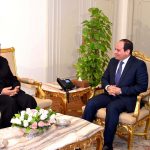 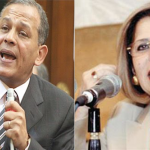