Sword over the Nile is as much a reference as it is a book. It is amply annotated, referenced, cross-referenced, as any historical document need be. This scientific endeavor is based on the most reliable documents available. Mr. Guindy’s grounded familiarity with Arabic, English, French, enabled him to consult documents from antiquity. For those who are bi-lingual or tri-lingual it is an enjoyment. In the ‘Note to the reader’ he outlines the varies sources and references he used to put together this book.

While Sword over the Nile is a worthy document for scientists of different branches the ease in which it is rendered does not leave out the amateur or lay reader out. In fact, it is a guide for further exploration.

Mr. Guindy sites the first martyrdom of the Copts during the rule of Emperor Diocletian (which started in 284 A.D.) The evidence is ample which he highlights of the eviler, progressive/regressive martyrdom, under the Islamic Arab conquest since the ‘fath’ فتح in 641 A.D. It is accurate to state that the Coptic martyrdom continues until this present day. I dare say it eclipses the martyrdom of all other Christendom put together.

The linkage between the Coptic faith and Western Christianity antedates any other spread by the Roman or Byzantine Church/empire. Indeed, there is ample evidence referred to of the outreach of Coptic Christianity to the Emerald Island ‘Ireland’, Eire. Pict on the North East shores of Scotland shows crosses and icons of St. Anthony of Egypt, the father of monasticism, sharing a loaf of bread with St. Paul the Simple, (مار بولس المسكين)

This compendium has been translated into English, a French version in progress and God willing into many other languages. There are many departments of Coptology, Coptic studies, in universities worldwide, on all the habitable continents.  It is important that a copy of this book be available to students of this heritage.

There are hundreds of Coptic Orthodox Churches in the Diaspora. The libraries of these churches need a copy of this book to establish the Coptic heritage to this and succeeding generations of Copts. As mentioned in the Forward of this book by Raymond Ibrahim, Guindy addresses the continuum of aggression of the Muslim World in Egypt and the outreach of the likes of the Muslim Brotherhood with over seventy branches globally.

This book alerts all, particularly Western Christianity, of the ongoing sorry plight of the Copts of Egypt. It is a must read.

Saba E. Demian, M.D. is a retired professor of Laboratory Medicine at LSU and USC Schools of Medicine.

A Sword Over the Nile: New Book Exposes 14 Centuries of Christian PersecutionSelected Opinion 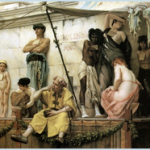 What about those descended from millions of white Europeans enslaved by Arabs?Selected Opinion