Like his predecessors, President Abdel Fattah El-Sisi has found the group impossible to ignore.

More than four years after Egypt’s Muslim Brothers were ousted from power in a military coup and declared a terrorist organization, their chief nemesis, President Abdel Fattah El-Sisi, is reshuffling key players in his cabinet in ways that could ultimately benefit the Muslim Brotherhood.

Unlike former president Hosni Mubarak, whose rule relied on multiple pillars of institutional loyalty, including the judiciary, the military, the police, and some businessmen, as well as the government-backed National Democratic Party, El-Sisi is almost entirely dependent upon the trusted support he receives from the military. With no meaningful political parties capable of operating freely in Egypt and a stunted private sector, the military’s involvement in civilian, economic, and political affairs has reached unprecedented levels.

Yet over the last few weeks President El-Sisi has sacked a number of key players in the military, including Mahmoud Hegazy, the military’s chief of staff, and Khaled Fawzy, the head of the Egyptian General Intelligence Services. While no public explanation was given, the moves could dilute the support he was once guaranteed from the military. El-Sisi would not have taken such steps without cause to believe they will provide some greater benefit.

It would not be the first time the Brotherhood benefits from a shift in Egyptian politics. From President Gamal Abdel Nasser to Anwar al-Sadat to Hosni Mubarak — all of whom rose through the military ranks — a familiar narrative has held: When the generals turn against each other, presidents often turn to the Muslim Brothers for political support.

When Anwar al-Sadat carried out the “corrective revolution” in 1971, he fired dozens of powerful Nasserist generals, and then agreed on a deal whereby the imprisoned Muslim Brotherhood members would be released and allowed to practice politics, in exchange for not publicly criticizing Sadat. The deal was a success until Sadat signed the peace treaty with Israel in 1979, which ultimately led to his assassination.

For many years, the Muslim Brotherhood has been a controversial but key player in shaping the political scene in the Middle East. It was established in 1928 with the purpose of fighting the British occupation in Egypt; but its message quickly spread around the region. The tightly organized Brotherhood has maintained multiple roles, acting as a political party seeking electoral gains and as a charity organization promoting welfare programs and religious education. The ideas promulgated by its key thinkers have been appropriated by extremist groups. Some of its members have committed violent acts, particularly in the movement’s first three decades (although the Brotherhood’s Egyptian leadership has repeatedly renounced violence); and some of its former members have gone on to establish terrorist groups like al-Qaeda.

Over the years, the group has evolved to pose a challenge to the government in its home country, Egypt, but also in the region. In some countries such as Jordan, Morocco, Tunisia and Sudan, the Muslim Brothers are an acknowledged political partner. However, in places such as Egypt and the Arab Gulf countries — with the exception of Qatar — the Brothers have been repeatedly outlawed and, in some cases, designated a terrorist organization. Even historically, the Brotherhood’s relationship with regional governments has fluctuated over time.

Every Egyptian president has eventually come to the realization that some degree of political inclusion for the Brotherhood is required if stability is to be maintained. President Mubarak was particularly skilled at engineering his relationship with the Muslim Brotherhood in ways that allowed the group a limited degree of participation in political life despite officially banning it.

El-Sisi is no different. In a complete reversal of his anti-Brotherhood public stance, he is exploring reconciliation opportunities with the organization through mediators. Brotherhood sources in Egypt told us that military intelligence officials have been in contact with Muslim Brotherhood figures in prison lately to agree on a deal whereby senior leaders will be freed in exchange for disengaging from politics.

El-Sisi signalled his shift with a series of decisions over the past week. The most consequential was the sacking of Egypt’s influential spy chief General Khaled Fawzy on Jan. 18. General Fawzy took office in December 2014 during a tumultuous time and was seen as a hard-liner who accelerated the government’s crackdown against Islamist dissidents in general and the Muslim Brotherhood in particular. Military sources tell us that Fawzy blocked the attempts of past Egyptian governments to reconcile with the Brotherhood. His departure suggests the Brotherhood now has a new opening.

Another sign of the Brotherhood’s resurgence came on Jan. 23, when El-Sisi imprisoned his most formidable rival for the presidency ahead of elections in March, General Sami Anan. Anan, who served as the last military chief under Mubarak and handed power over to the newly elected Morsi government, has a long-standing relationship with the Brotherhood. He had promised to reopen the files of past verdicts against the Brotherhood, which he argued were politicized, in the hope of receiving their support in the upcoming election. El-Sisi seems to believe that reconciliation with the Brotherhood is inevitable and is determined to ensure it benefits him and not a rival.

If indeed there is a reconciliation, the Brotherhood’s influence throughout the Middle East will be enhanced. This will cause concern in certain Gulf states, such as the United Arab Emirates and Saudi Arabia , which have declared the Brotherhood a terrorist organization. It could complicate the already tangled relationship between El-Sisi and the Gulf states, although it is worth noting that one-time Yemeni Brotherhood affiliate Al-Islah has been speaking with the U.A.E. through Saudi Arabia. The question now is, how will states such as the U.A.E. and Saudi Arabia continue to declare the Brotherhood a terrorist organization if the Brothers’ home country has decided on reconciliation?

The Brotherhood is a controversial political, social and religious movement, but because it enjoys widespread support in Egypt and the region, it has always managed to resurrect itself. It is just a matter of when and how. Recognizing this, perhaps El-Sisi has decided to follow in the footsteps of his predecessors by reaching a new understanding with the group. Only time will tell.

This column does not necessarily reflect the opinion of the editorial board or Bloomberg LP and its owners.
_________________
Photo Credit: Is El-Sisi looking up to the Brotherhood? Photographer – Chris Ratcliffe
https://www.bloomberg.com/view/articles/2018-02-06/egypt-s-muslim-brotherhood-finds-favor-again
Abdel Fattah el-Sissi, Egypt, Muslim Brotherhood 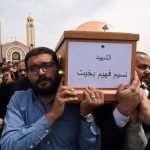 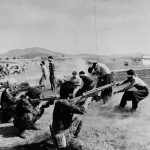