Either there is a deliberate intention to drag Egypt into a series of problems that concern churches and the right of Copts to worship; or there is official apathy, indifference, and inaction regarding the harm inflicted upon churches by local authorities in defiance of the law.

Two weeks had barely passed on the police closure of churches in the southern provinces of Minya and Sohag when another church, in the north Cairo district of Shubral-Kheima, was targeted for closure by the police. As in case of the Minya and Sohag churches, the non-licensed de facto church in Shubral-Kheima, in which prayers and services have been regularly held for some two years, had officially applied for legalising its status according to the 2016 law that regulates the building of churches. Throughout centuries, Copts had taken to worship in non-licensed churches, since obtaining licence to build a church was arduous, humiliating, and near impossible.
Last week, the church of Pope Kyrillos was abruptly subjected to a power cut by the Electricity Authority in Shubral-Kheima. No official reason was given for the power cut, nor had the church committed any violation that would warrant that.

As in case of one of the Minya churches that had been closed by the police, the clergy and congregation of Pope Kyrillos’s rushed to their church and sat-in there, for fear that the power cut signalled an intention by the local authorities and police to close the church down or demolish it. The sit-in involved an outburst of angry protest which threatened sectarian strife of dire repercussions. Matters would have got out of hand had not Anba Morqos, Bishop of Shubral-Kheima, urged self-restraint and ordered a halt to worship in the church until he probed the issue with the local officials.

So we are before a seemingly criminal plot to induce sectarian strife in Egypt. We see an irresponsible, unfathomable, illegal rush by local administrations to inflict harm on churches seeking official legalistation of their status. In every case, it falls upon the Copts themselves to handle the problem and calm their rage, whereas local administration and security officials get away with their deeds without being held accountable. With every incident, Coptic religious leaders are made to succumb to the injustice in order to uphold national interest and abort attempts at sedition in Egypt. But the closed churches are not opened, nor is the procedure of legalising their status speeded up.

This hateful scenario brings to mind the proverb, “Don’t ask the victim not to cry, ask the offender to stop striking”. Sadly, it appears that Egyptians have no qualms about asking the victim not to cry; since they fear the cries would be heard outside Egypt and would work to tarnish the country’s image. As for the offender, there are also no qualms about his getting away with his offence.

I present the case of Subral-Kheima church to the Prime Minister and the ministers of interior and local development. I ask them to add it to the cases cited in the briefing submitted by MP Nadia Henry to the Speaker of the House of Representatives’ regarding the closure of churches in Minya. MP Henry demanded an official explanation, and that this issue be referred to the House’s Committee of Defence and National Security. I hope the response would not be in the customary honeyed clichés of the type: “Egypt is going through intricate conditions and has a priority issue with terrorism. It is thus not appropriate to raise sectarian tensions that are exploited by enemies.” Or: “these are individual incidents that do not touch on the majority of Copts who enjoy their freedom to worship”. Or perhaps: “Egypt is keen to uphold principles of citizenship and establish diversity and acceptance of the other.” Such ambiguous talk cannot make one overlook the fact that there are hotspots in Egypt where rampant religious fundamentalism is met by official apathy. We must bravely acknowledge that we have problems on this front, and rise to meet the challenge. Any problem facing any Egyptian group no matter how small, in any spot in Egypt no matter how remote, is a problem that needs to be courageously addressed.

I hope the House of Representatives does not send any delegation abroad soon, nor receive any foreign delegation visiting Egypt, lest we again fall into the pitfall of having to discuss Copts and their churches. Obviously, the issue generates ‘political embarrassment’, since we find ourselves forced to beautify our image by obscuring the fact. When a bold Coptic MP spoke of the Coptic issue candidly and patriotically, the Egyptian media misrepresented her words, so much so that she found herself forced to issue a correction.

The entire official stance brings to mind the saying: “They don’t fear the immorality; they fear the scandal.” 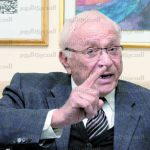 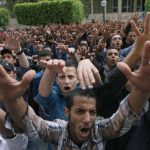 Progress and History in Zigzag in Muslim WorldSelected Opinion