“There were children. What have they done to deserve this? I wish I had died with them instead of seeing these scenes.” This is how a witness described the scene at St. Mark’s Cathedral in Cairo after a bomb killed at least twenty-five and injured dozens of others Sunday morning.

Why the bombing? And who are the Coptic Christians under attack?

In 2013, the Egyptian military overthrew President Mohammed Morsi, an elected leader backed by the Muslim Brotherhood. The military also began its continuing crackdown against Islamists in the country. Some of Morsi’s supporters blamed Christians for supporting his overthrow and have been targeting Christians and churches in reprisal. The government has also pursued a number of blasphemy cases in recent years against Egyptian Christians.

These events highlight the continuing significance of Egypt for God’s people. Egypt is mentioned in the Bible more often than any other place outside Israel. Abraham lived there, as did Joseph and his family. The children of Israel lived in Egypt for four centuries before the Exodus. The prophet Jeremiah was taken there after the Babylonian assault on Judah. Joseph, Mary, and the infant Jesus fled to Egypt to escape King Herod.

Egyptian Christians trace their origins to the ministry of St. Mark around AD 50. They believe that he was the first Pope of Alexandria, the head of their church. These believers are called “Coptic” Christians. “Copt” is derived from the Greek word Aigyptos, which was derived from one of the names of Memphis, the first capital of ancient Egypt.

Coptic Christianity spread quickly in the early centuries of the Christian movement. A Coptic fragment of John’s Gospel has been found in Egypt and dates to the first half of the second century. New Testament writings dating to AD 200 have been found in Middle Egypt. The Catechetical School of Alexandria was founded around AD 190 and is the oldest such school in the world. Athenagoras, Clement, Origin, and Jerome all received instruction there. Monasticism also started in Egypt in the late third century.

Today, Coptic Christians comprise 10 percent of the Egyptian population. As many as two million Copts live in other countries around the world, where they have established Coptic churches consistent with their country and culture. Coptic Christians are especially known for seasons of fasting—out of the 365 days of the year, Copts fast for over 210 days. Their Lenten fast encompasses nearly eight weeks and culminates with Easter. (For more, see the Encyclopedia Coptica‘s excellent article, “The Christian Coptic Orthodox Church of Egypt.”)

The ongoing persecution of Coptic Christians is part of a larger global escalation against the followers of Jesus today. John Allen’s The Global War on Christians notes that 80 percent of all religious persecution is directed against Christians, and 90 percent of the world’s religious martyrs are Christians. The United States Commission on International Religious Freedom has identified sixteen countries where “heinous and systematic” offenses occur against religious communities. The only religion under attack in all sixteen countries is Christianity. (For more, see my Respected to Irrelevant to Dangerous: Does Religion Poison Everything?)

God’s word warns us that “all who desire to live a godly life in Christ Jesus will be persecuted” (2 Timothy 3:12). Jesus told us, “If the world hates you, know that it hated me before it hated you” (John 15:18).

Nonetheless, we are to “love your enemies and pray for those who persecute you” (Matthew 5:44). We are promised, “Blessed are those who are persecuted for righteousness’ sake, for theirs is the kingdom of heaven” (Matthew 5:10). Justin Martyr’s proclamation to the persecuting Romans is still true today: “You can kill us, but you cannot harm us.”

The Egyptian government has called for three days of mourning in response to Sunday’s bombing. Let’s join our Coptic brothers and sisters in mourning their dead and praying for those who lost loved ones. Let’s pray for courage and resilience for persecuted Christians in Egypt and around the world.

Who are the Copts? Why are they being attacked? 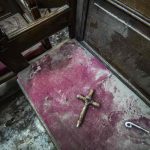 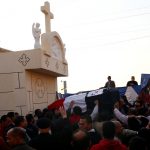 Cathedral Bombing in Cairo Puts Egypt on Edge, and Its President ScramblingSelected Opinion