Last week, an Egyptian court ordered the release of all defendants accused of assaulting a Coptic woman in the southern city of Minya.

Rumors had spread of a relationship between a Coptic man and Muslim woman in Al-Karm village. On 20 May, hundreds of armed Muslims reacted and attacked the homes of seven Coptic families, dragging the elderly mother of the man, stripped naked, through the streets of the village. Only six attackers were arrested but later released.

Remarkably, Bishop Makarios of Minya took a strong stance and refused the customary reconciliation sessions proposed by local officials. “Participating in such sessions without the enforcement of the law is meaningless. The matter should first be tackled through the application of the law”, he said.

Instead of pursuing legitimate legal processes, the Egyptian security apparatus holds these “reconciliation sessions” after every sectarian incident. During these sessions a group of Christian and Muslim clerics gather with the rival parties in an effort to resolve the conflict. The sessions often end with the Copts being forced to relocate leaving their houses and businesses behind, despite – more often than not – being the victims, while the perpetrators enjoy impunity.

Despite the utter failure of this strategy, the Egyptian state prefers it over imposing law and order. Although it sticks to the law assiduously when it comes to activists and critics.

However this should not raise eyebrows given the Egyptian State’s record in the repetition of failures on many pressing issues, such as reviving tourism, restoring security and re-establishing economic ‘stability’.

A few days after the court ruling, two more sectarian incidents took place in the same city, Minya. A group of Muslims burnt down four houses of Copts after a rumor spread of an unauthorized church being built. A Coptic family was attacked which, according to the Coptic church spokesman, resulted in the death of one member while others were wounded. We still know little about these two incidents, but they are clear indications of the rise of sectarian violence once again in Egypt.

The mounting events pushed Bishop Rafael, a prominent clergyman and the general secretary of the Coptic Holy Synod, to actively question whether spilled Coptic blood meant anything to the sovereign institutions of the country.

The Egyptian president issued a statement on the attack on the elderly woman in Minya: “The presidency is following the sorrowful events in Minya… The president has given orders to state institutions to restore order and protect lives”.

Yet despite the sweet talk from President Abdel Fattah El Sisi, and his visits to the Coptic cathedral during Christmas mass, the rate of attacks has escalated with little, if no response at all, from the state. 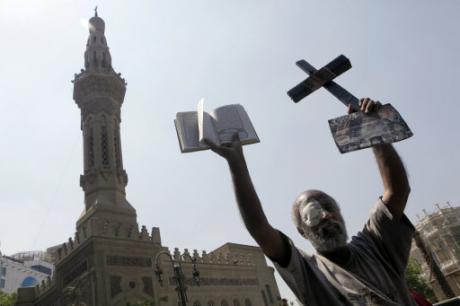 An Egyptian protester holds a cross and a copy of Islam’s holy book, the Quran, during a protest in Tahrir Square to condemn sectarian clashes in Egypt, 2013. Amr Nabil /Press Association. All rights reserved.

Issues of discrimination against Copts have never been tackled and church leaders, even those who publicly supported him, have expressed concerns about the newly proposed unified law for building places of worship. “The government has neglected the church notes regarding the new law”, said Bishop Paula, who is responsible for church-state relations and a staunch supporter of Sisi.

But the truth is that the Coptic problem is a part of a bigger problem, that many who claim to defend the rights of Copts fail to see. The real problem is the clampdown on freedoms, the absence of the rule of law and the unprecedented wave of repression since the reign of President Sisi began.

Copts suffered persecution under the despotic regime of former president Hosni Mubarak, yet according to the semi-governmental National Council for Human Rights, Egypt is now seeing ten sectarian incidents every month. These levels of repression exceeding previous levels, the correlation with the general state of repression seems unavoidable.

Under the current regime, we’ve seen an increasing crackdown on freedom of expression, especially after the draconian protest law was introduced. A huge number of dissidents, even those on social media, are being tried for opposing the regime. Rights groups are reporting an “unprecedented rise” in forced disappearances in Egypt, and many other human rights violations have taken place over the past few months.

The Coptic community will never be an exception under such a repressive regime. This ruling mindset will seek to control every sect of society, be it a political, religious, gender or social. Even lawyers and activists who defend social minorities are being prosecuted.

To single out the mistreatment of Copts and the failure of the state to protect them, as a “Coptic issue”, is a wrong diagnosis of the problem and wrong diagnoses only lead to wrong treatments or no treatment at all. Until this “issue” is seen as a part of the larger picture, there will be no solution and this vicious cycle of suffering will continue endlessly.

The question remains whether the Coptic intelligentsia and the leaders of the Coptic church will learn the lesson or continue to make the same historical mistake of supporting authoritarian regimes over and over again.