Numerous, respected voices have been raised demanding enforcement of the law and justice in the most recent sectarian violence against Coptic communities in Upper Egypt, rejecting state-sponsored customary reconciliations, which allow offenders to escape punishment, stoke more resentment, and punish victims instead of protecting them.

The demand is necessary. Without it, the state cannot seriously confront sectarianism or honour the constitution and citizenship.

But while I fully agree that the law must be enforced to stem growing sectarian violence, it’s not enough. We need to address the root of the problem instead of simply absorbing the consequences and treating the effects.

First, the law on equality and anti-discrimination, long in the making, must be issued. The new constitution’s provisions are clear in this respect, but these provisions set forth general principles that aren’t always directly applicable.

Laws are required to translate these principles into specific articles, instruments, and penalties for offenders. The failure to issue the law thus far is impeding the application of constitutional principles, leaving only general slogans and noble ideas.

This law should not only deal with the most recent sectarian violence, as is often the case with laws issued under exigent circumstances. It must be a comprehensive law that addresses all forms of discrimination in society—between Muslims and Christians, women and men, youth and the elderly, rich and poor—and it must do so by guaranteeing equality in all rights and duties, including worship, belief, expression, labor, the occupation of public office, and the receipt of state services.

Equality is an indivisible principle and shouldn’t be subject to political horse-trading. Moreover, we don’t need another law that goes unenforced. The law should be bolstered by the creation of an equality commission, the training of prosecutors and judges, assistance from civic associations, awareness raising among the citizenry of their rights, and state political will to fully enforce the new law.

On the other hand, if respect for and enforcement of the law are needed to stop sectarian violence, there is no society that chooses to enforce the law in some areas while ignoring it in others. Selectivity will not yield positive outcomes. Respect for the law must be a general, comprehensive demand for everyone hoping to realise some degree of justice and equality and cement citizenship in Egypt.

The law cannot be strictly applied in economic matters, but seen as superfluous when it comes to rights and liberties. Civil rights and liberties cannot be viewed as worthy of protection in some cases and not in others. Those who aspire to protect Egyptian citizens and ensure their constitutional rights must hold to this principle at all times and in all cases, regardless of the identity of the citizen or his/her intellectual or ideological orientation.

Our battle is to restore the rule of law and respect for the constitution—a battle in which selectivity and relativism do not apply.

As for addressing sectarian violence, long before and after the January revolution, two types of official intervention have been common in Egypt. The first is security intervention, when the state, having ignored the signs of tension and failed to address the cause, dispatches forces to quell the violence after it erupts, apprehend perpetrators, sponsor a customary reconciliation, and perhaps relieve an official of duty.

The second type of intervention is inviting official religious institutions to participate in the reconciliation session to calm nerves and talk about national unity and the development of religious discourse.

Both types of intervention sent a tacit, and times explicit, message that the matter is too dangerous and important to involve non-security or non-religious parties. I believe this is a grave error, one committed by successive regimes and governments over decades. The fact is that alleviating sectarian resentment and dealing with its social roots is impossible without broader involvement by the entire community.

In any country seeking genuine, lasting social peace, the state encourages community institutions to play their various roles: to analyse the root of the problem, offer solutions, work on the ground in areas afflicted with tensions, sound the alarm in advance and take action to prevent violence.

Currently, however, the state is apprehensive about civic and political institutions and activities, stifling civil society, seeking to control media rhetoric, gagging youth and the opposition. In such cases, resentment and strife will necessarily fester while society’s mechanisms for addressing violence collapse.

All that is left is for security to intervene after homes and churches have been torched, after which religious institutions step in to oversee a customary reconciliation that cements the absence of rule of law.

Egypt is not without expertise in this field. Over the years many attempts have been made to build social, local mechanisms to defuse sectarian conflict in Upper Egypt and to build trust in a divided community. Unfortunately, the state sees such brave, high-minded attempts as interfering in matters limited to police and men of religion, which doesn’t work, as experience has shown.

Finally, and although space here does not allow an exploration of all the economic and social factors that feed tension and violence, we can at least agree that with rising prices, scarce jobs, weak social protection, the absence of social mobility, and the spread of weapons in villages, it takes more than good intentions to alleviate violence.

This isn’t an excuse for sectarian violence or an apology for its perpetrators. The law must take its course. But we must recognise that the lack of successful social policies, economic recession and price inflation will not foster an ideal climate for social peace.

Sectarian tension must not be underestimated or ignored lest it becomes an all-consuming strife. The situation requires a decisive stance from society against extremism and discrimination, not simply action after the violence has occurred.

When will we begin this task on which the nation’s future depends? 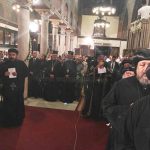 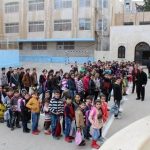 Genocide of Christians in the Path of ISIL: An Interview with Cardinal Theodore McCarrickNews & Reports