The Egyptian army’s military campaigns continue to target the hideouts of terrorist groups in Sinai Peninsula that from time to time claim responsibility for the attacks carried out against the army and police. The latest such attack took place March 19, targeting a security checkpoint in the city of el-Arish, killing 18 members of the security forces. In an interview with Al-Monitor, Nabil Naeem, the founder of the Islamic Jihad organization in Egypt, said that terrorist groups can’t be confronted unless their funders and supporters are exposed. “The terrorists,” he said, “used an 82 mm mortar shell in their attack on the security checkpoint in el-Arish city. This weapon is not [typically] in the possession of jihadi groups because it cannot [easily] be bought — proving that there are countries supporting these groups.”

Responding to a call for reconciliation with these groups to end the bloodshed, as happened in the 1990s, Naeem declared that “these groups cannot be trusted. You either annihilate them or they annihilate you. There is no third choice.”

Naeem called on the army “to impose more control and fend off these groups.”

Below is the full transcript of the interview:

Al-Monitor: How do you assess the current political scene amid the repeated terrorist attacks targeting state institutions?

Naeem: Unfortunately, tyrannical terrorism aimed at destabilization continues to target state institutions, including police and civilian agencies. This was clearly shown through the terrorist attacks carried out every now and then in Sinai, Cairo and other provinces. Despite the intense attempts by the army to eliminate the extremist groups often claiming responsibility for the attacks, success was not on their side.

Al-Monitor: On March 19 an extremist group attacked a security checkpoint in el-Arish, killing 18 members of the security forces. Who do you think is responsible for these ongoing attacks in Sinai?

Naeem: There are scores of extremist groups in Sinai, bearing the flag of Islam, monopolizing its representation, and misinterpreting Quranic verses for their advantage. Islam is disassociated with them. Among these groups are Ansar Bayt al-Maqdis, whose targets are the army, police, military and police facilities in Sinai; and the Islamic State’s Sinai branch, which through the use of armed jihad attempts to declare an Islamic state in Sinai outside the auspices of the [Egyptian] state. Other groups are Jama’at al-Tawhid wal-Jihad, and At-Takfir wal-Hijra, which espouse the takfiri school of thought — different than jihadi Salafism — declaring the army and police to be apostates since they impede the implementation of Sharia. Many groups follow this school of thought, including Ansar al-Jihad, Mujahedeen Shura Council and Aknaf Bayt al-Maqdis. Unfortunately, the continuous army campaigns have not proven satisfactory so far because these extremists recruited a number of Sinai residents, who work for them and helped them with the terrorist tasks, and for whom they dug underground tunnels.

Al-Monitor: What is the difference between the Egyptian Islamic Jihad, a group you founded, and Salafi jihadism in Sinai?

Naeem: Salafi jihadism is guided by the [Quranic verse]: “Those who do not rule according to what Allah revealed are the unbelievers.” Therefore, they declare the governors, army, police and all those who assist them as apostates. The Islamic Jihad organization I founded in the 1980s aimed to dissolve the government and presidency by infiltrating the Egyptian army and recruiting elements to carry out the plan through armed jihad. This [jihad] indeed happened. We assassinated [President] Anwar Sadat using four Egyptian army officers, but we failed to dissolve the presidency and government and implement Islamic rule.

Al-Monitor: Since Abdel Fattah al-Sisi became president, Sinai has become a safe haven for extremist groups declaring war against the state. How can the state confront these groups?

Naeem: These groups do not work alone. They have outside supporting parties aiming to target Egypt, just like they did with Syria, Iraq and Libya. Some countries fund, arm and train these groups using state-of-the-art weaponry, equipment and missiles. When I was in Afghanistan from 1980 until 1984, a period during which I believed in armed jihad, we recruited thousands of young people, funded them on a monthly basis and provided training on weapons and explosives. Eliminating these groups can only happen with the state imposing control over Sinai, securing the borders, and implementing comprehensive and genuine development.

Al-Monitor: Why do you believe the army and police are unable to eliminate terrorism and extremist groups in Sinai?

Naeem: As I said, the army in Sinai is not fighting extremist groups and organizations, but rather countries funding, supporting and participating in terrorism. Egypt is in a state of war with an unknown enemy, and this is the hardest type of war. This is shown through the fact that terrorists used an 82 mm mortar shell in their attack on the security checkpoint in el-Arish, a weapon that is not up for sale and cannot [easily] be acquired by jihadi organizations, which proves that there is an international plan to deliver a blow to Egypt.

Al-Monitor: Where does the Islamic Jihad organization stand now in Egypt? How many members does it have? Does it have other branches?

Naeem: We founded the Egyptian Islamic Jihad organization in 1979, at the beginning of the Soviet invasion of Afghanistan. We left for Afghanistan in 1980 with thousands of members and mujahedeen. We came back in March of 1981 to participate in the assassination of Sadat with the help of Egyptian army officers whom we recruited, such as jihadis Tarek al-Zumar and Abboud al-Zumar, who was a military intelligence officer, and Khaled al-Islambouli, who was an army officer. The assassination was undertaken following the events of Sept. 3 during which Sadat arrested thousands of Islamic movement members. After that, I was imprisoned only to be released in 1986 and assist Ayman al-Zawahri in founding al-Qaeda to be a jihad platform in the Arab world. I was then arrested in Egypt in 1991 under what was labeled the arrests of “returnees from Afghanistan,” and remained in jail for 20 years. I was released following the [2011] eruption of the January 25 Revolution after thorough contemplation and readings. I learned about the real Islam and I successfully talked 3,000 young men out of the [Islamic Jihad] organization. The organization was then dissolved and the members joined other jihadi groups that represent their goals and thoughts.

Al-Monitor: Do you expect violence to come to an end soon in Egypt or will it continue?

Naeem: Violence will endure for years as long as there are supporters. As I already said, these groups have no funding resources to spend on jihad.

Al-Monitor: Do you support reconciliation between self-labeled “Islamist” groups and the state to end the bloodshed, as happened in the 1990s?

Naeem: It is not easy. Reconciliation has rules and conditions, and what happened in the 1990s is totally different than now. During that time, the leadership of the groups was arrested and imprisoned, the state was more powerful and influential, and then-Minister of Interior Habibi el-Adly was more robust and resolute. Today, the groups are many, and thoughts and considerations are different, with foreign parties providing support. Therefore, the idea of reconciliation should be carefully studied, especially since these groups cannot be trusted. You either annihilate them or they annihilate you. There is no third choice.

Al-Monitor: Concerning Egyptian domestic affairs, how do you see the Islamic movement’s presence on the street? Has it lost its popularity in the last two years?

Naeem: Unfortunately, the practices of the Muslim Brotherhood as rulers have led the Islamic movement to lose popularity, especially after the former opted for violence following the June 30 Revolution that led to its ousting. The proof is in the Islamist Nour Party winning only 11 parliamentary seats, while it won 112 seats or 22% in 2012. This shows that people have lost trust in the so-called Islamic movement.

Al-Monitor: Do you support the dissolution of religious parties in Egypt?

Naeem: I demand the immediate dissolution of these parties and I reject that any party based on religion survives, because we could later on have calls for the establishment of a Christian party. Such thinking has the ability to destroy and divide society. Also, the Nour Party, the only Islamic party in parliament, often declares that its religious authority is Islamic as though the people are apostates. We are Muslims and our religious authority is also Islamic. Islam cannot be monopolized.

Al-Monitor: Some believe that involving Islamic groups in political work will limit their violence and the illegal means they use to express themselves. What are your thoughts on this?

Naeem: Political work is not to be monopolized. The state should provide the means that guarantee that all parties are democratically involved. However, whoever adopts the takfiri school of thought and seeks to destroy the state or practice violence against its institutions will be thwarted and eliminated so that we can protect the cohesion of society.

Al-Monitor: We heard that some Egyptian young men have joined IS [Islamic State]. What is the reason behind this? Do we have to reassert the religious rhetoric of Al-Azhar for the young people to understand moderate Islam?

Naeem: The real reason as to why a number of young people joined IS relates to the naive religious rhetoric that the Ministry of Awqaf has been spoon-feeding the preachers since the 1970s, which has not adapted to catch up with the challenges and changes facing Muslims around the world. In the Western world, we see people misinterpreting Islam and considering terrorists to be the core representatives of Islam, which is the complete opposite of the truth. Until now, Al-Azhar has failed to address the Western world and explain moderate Islam. Moreover, IS relies on the most advanced technological means to attract and recruit. Through one online video, millions of young people around the world can be reached, while Al-Azhar is content with organizing convoys that tour provinces, only to be attended by scores of people, and has not stepped up its performance to match the changes. 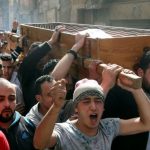