Hundreds of Coptic Christians on Thursday attended the burial of a father and his son who were killed by a police officer in Egypt’s Minya province, amid cries for the state to provide more protection.

The Copts, who make up around 10 percent of the population, have long complained of discrimination. They have also frequently been attacked by Islamist militants who see them as infidels, prompting authorities to place armed guards outside churches and monasteries.

While Wednesday’s killing appeared to be the result of a dispute between a construction worker and his son on one side and a police guard on the other, it angered local Copts still reeling from the death of seven members of their community in an Islamist militant gun attack in November.

Residents and security sources said the officer shot the pair, identified as Imad Kamal Sadeq, 49, and his 21-year-old son, David, late on Wednesday on a construction site near a church he was guarding.

They said the policeman was in custody being questioned while authorities reviewed CCTV footage from the church’s security cameras.

Witnesses described angry exchanges between some 2,000 mourners and policemen guarding the funeral in Minya.

“One, two, where are the rights of the martyrs?” the crowd chanted.

The head of the local diocese, Archbishop Macarius, who led the funeral prayers, demanded a response from authorities.

“We call for all armed police officers assigned to guard churches to be checked. Are they qualified to carry live ammunition, so that they don’t become a source of danger rather than protection,” Macarius tweeted.

He also urged President Abdel Fattah al-Sisi to intervene personally to tackle the poor healthcare, education and employment prospects of Christians and Muslims in Minya.

In November, militants killed seven people returning from baptising a child at a Coptic monastery in the region, about 260 km (160 miles) up the River Nile from Cairo.

_____________________________
Photo Credit: People react during the funeral ceremony for the victims of the explosion at Saint Peter and Saint Paul Coptic Orthodox Church in Cairo, Egypt on December 12 2016 [Ahmed Gamil/Anadolu Agency] https://www.reuters.com/article/us-egypt-christians/hundreds-of-egyptian-christians-protest-at-police-killing-idUSKBN1OC22R 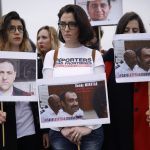 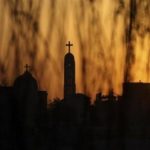 Waiting until you can’tNews & Reports