By The New York Times – Declan Walsh and Mohamed Ezz

Islamist gunmen killed at least seven Coptic Christian pilgrims in Egypt on Friday and wounded at least 16 in an attack later claimed by the Islamic State.

The attack — an ambush on two buses — ended a nearly yearlong lull in major attacks on Copts in Egypt, and may signal a resumption of the Islamic State’s campaign to sow sectarian divisions in Egyptian society.

It was also a setback for President Abdel Fattah el-Sisi, who has put security concerns at the heart of his autocratic style of rule and has repeatedly vowed to protect Christians, a minority in the country, from attack.

A video circulating on Facebook from the site of the attack showed a man slumped over the steering wheel of a bus. Two other bloodied, inert figures lay on the back seats. A door of the vehicle, apparently ripped from its hinges and covered in blood, lay on the ground.

The Interior Ministry said the attackers appeared to have used a secondary road to approach the bus in the vicinity of the remote desert monastery south of Cairo.

Ambulances carrying three people seriously injured in the attack pulled into Cairo’s Sheikh Zayed Specialized Hospital on Friday evening. Nader Adel, a volunteer who accompanied a wounded teenage boy to the hospital, said the boy described the ambush to him.

By that account, masked gunmen riding a pair of small, off-road vehicles stopped the buses as they left the monastery. The gunmen stepped up and opened fire. One of the buses managed to speed away, but the other, in which the seven people were killed, did not. People were injured on both buses.

The same desert road was the site of an almost identical attack in May 2017. In that incident, gunmen wearing military fatigues opened fire on three buses that were traveling in a convoy toward the monastery of Saint Samuel. At least 28 people were killed.

Visits to desert monasteries, which have surged in number in the past 50 years, play a central part in the religious practice of many Egyptian Copts, who make up an estimated 10 percent of the country’s population.

The Copts have also been staunch supporters of Mr. Sisi, although their backing has been shaken by violent attacks in the past two years. Friday’s attack coincided with the start of one of Mr. Sisi’s prestige events — the World Youth Forum, in the Red Sea resort of Sharm el Sheikh, where he is expected to address thousands of young Egyptians this weekend.

In a statement, Mr. Sisi condemned the attack as an act of “black terrorism” carried out by forces that were “seeking to undermine the cohesive fabric of the homeland.” He vowed to find and prosecute the perpetrators.

The attacks on Christians are viewed as an attempt by the Islamic State to widen its campaign of violence beyond Sinai, where the group has been fighting the Egyptian military for years, and to exaccerbate religious divisions in Egyptian society, much as it did in Iraq and Syria.

In the past two years, Islamist suicide bombers have hit prominent churches in Cairo, Alexandria and Tanta, a city in the Nile Delta, killing at least 100 people.

But the worst act of sectarian bloodshed, in November 2017, targeted Muslims. Dozens of militants opened fire on a mosque in Sinai affiliated with the Sufi strain of Islam, which extremists view as heretical. The militants killed at least 311 people, in the deadliest act of terrorism in Egypt’s modern history.

In the past year, tighter security around Christian places of worship and the capture of high-level militant commanders, including one apprehended last month in Libya, led to a sharp reduction in Islamist attacks.

But the attack on Friday signaled that a deadly threat remains. 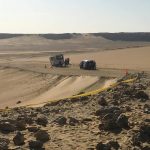 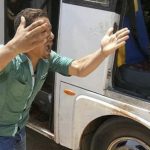