As the last of the U.S. troops left Afghanistan Monday and the Taliban has taken control, many fear for the religious minorities in the country, including Christians, who are likely to be targeted for their beliefs.

Sam Brownback, a Catholic who served as U.S. ambassador-at-large for international religious freedom from 2018 to 2021 and was formerly governor of Kansas, spoke with the Register Tuesday about the threats these groups now face and some of the ways the U.S. could act to prevent what he fears could be a genocide.

What have you seen of the situation for religious minorities in Afghanistan in the past few years?

It has not been good, but now it’s desperate and deadly. The last few years, you could have a somewhat normal operation. We did have a Sikh wedding party where there were 20 people gunned down. And then a number of the Sikhs tried to leave — there weren’t many left in the country, like 600 at the time. By best estimates, now there’s just over 200.

You did see a number of other communities in the larger cities able to somewhat operate, Christians, Christian converts, messianic Muslims. They were able to somewhat operate and not be killed. I’m afraid now they would be extraordinarily vulnerable, and we didn’t provide any way for them to exit. So now, they’re getting desperate to flee. I’ve got lists myself of hundreds of individuals trying to get out — mostly it’s a combination of Christian converts and NGO (nongovernmental organization) workers, local NGO workers that were associated with Western NGOs.

What are some of the threats these religious minorities would face under Taliban rule?

We saw this situation in a different country, in northern Iraq ,when they couldn’t negotiate a Status of Forces Agreement in Iraq and so we pulled our troops back. We got a genocide then that took place of the Yazidis and the Christians in northern Iraq. This was the genocide declared by Secretary of State John Kerry at the time, and that’s what’s likely to happen to the religious minorities that are left in Afghanistan if they don’t get out or in deep hiding.

Now, those religious minorities were more concentrated in kind of a rural area in northern Iraq. The Yazidis had a particular Sinjar mountain, which was their center of worship. The Christians were in the Nineveh Plains. That’s an area that they had been since the times of Christ. But ISIS came through there and wiped them out — just killed them, drove them out. A lot of Christians got out; the Yazidis, a lot of them got killed.

I’m afraid you’re just going to see a similar scenario. And here in Afghanistan, it’ll play out somewhat differently, but if the Taliban doesn’t get you, ISIS is coming after you. I think it’s a grave situation for religious minorities, and that includes Christians, Christian converts, Hindus, Sikhs, Muslims that don’t agree with the dominant philosophy; there are Shia Muslims. All those are in grave danger in this situation in Afghanistan.

There are several things: No. 1, push for a safe zone, a safe haven inside or multiple safe havens inside Afghanistan. The French, the Germans are calling for this through the U.N. The U.S. can call for that, as well. That would be very helpful, to get a safe zone where people could go to and that had international security provided in those safe zones. That would be the No. 1 thing that could happen.

No. 2 is getting the adjacent countries to allow safe passage for these people fleeing from Afghanistan that are religious minorities or others. Press some of the adjacent countries to guarantee this. Next is to provide visas or places that will take these refugees. We should take some of these refugees. I’ve heard of Hungary being willing to take particularly Christian refugees. We need to get a listing of countries that would be willing to take them, and then, next, we need to be willing to provide humanitarian aid to the individuals that are leaving the country — humanitarian aid, probably into these adjacent nations that would be housing them on a temporary basis.

Nobody wants to create a permanent refugee camp, and so we’d hope these would be mostly just transit points in adjacent nations. Those are concrete steps that need to be happening right now.

What do you think of the way the Biden administration has handled the situation in Afghanistan?

I think they’ve handled it terribly. We set an artificial date to pull out. We haven’t provided for these vulnerable populations, and we know that they’re vulnerable. We do annual reports in my former office, and we know these populations. We have not provided for their safety at all, and we bear some responsibility — a lot of responsibility — for creating the situation.

What should be on top of the agenda for the Biden administration on religious freedom?

I would put this one at the very top right now because it’s a deadly and catastrophic situation that could easily lead to a genocide. This one is, to me, at the top of the agenda right now.

I think you’ve got to constantly keep a very strong eye out on China because it’s the future of religious oppression. What they’re doing to the Uyghurs, what they’re doing to the house-church Christians, what they’ve done to the Tibetan Buddhists, that’s what religious oppression is going to look like around the world if China gains more sway in places. We’ve just got to confront it now, before it gets to more places in the world, using these Chinese techniques.

Under the Trump administration, there was a discussion of a hierarchy of rights. How do you think our religious-freedom efforts are being perceived abroad at this point internationally? Are we putting out a clear message that religious freedom is important to the U.S.?

Well, it’s certainly not coming across as strongly as it was. I think it’s coming across now as “Yes, it’s a human right, but we’re not going to fight for it any more than we are any other human-rights issues.” I have some difficulty with classifying it as a hierarchy of rights. Here’s why: The left looks at that and says, “Oh, you got a hierarchy of rights. And we don’t believe in a hierarchy.” What we are, basically, and were, saying was, “Let’s go back to the agreed-upon human rights that were in the original U.N. Charter in 1948 on human rights, and let’s say we all support this set of human rights.” And it happens to be religious freedom, freedom of speech, freedom of assembly. It’s the basic ones in this country and our Bill of Rights.

What has happened is human rights have grown into a lot of different things a number of countries don’t agree on. A number of people say abortion is a human right. Well, I disagree with that. Abortion, to me, is the destruction of a young human life. That’s not a human right — but others say it is. Well, when you get out here, at this area of categories where we don’t agree on human rights, then they lose their potency. And then countries like China, or Russia or Turkey, just say all the human rights, they’re whatever anybody wants to define them to be. And we lose ground on the basic human rights.

What can Christians in the U.S. do to help and raise awareness of the plight of religious minorities in Afghanistan?

I really would hope they would shout about it. Put out some of the stories that they’re seeing retweeted; put it out on their Facebook [page] so that the people can become aware of it. I hope they will push their members of Congress and the Senate to stand up for religious minorities in Iraq and Afghanistan because the Congress can have an impact here if they push the administration. Some people in the administration don’t think there are religious minorities vulnerable in Afghanistan, which is beyond me, but they need to hear about it.

I would hope a number of parishes would offer to take in Afghan refugees. There are minors and orphans; 2,000 have been moved out to UAE [United Arab Emirates] from Afghanistan, that are sitting in a holding situation in the UAE. They need placement, and they need placements in the U.S. I would hope a number of parishes would stand up and volunteer to take Afghan refugees. They could make contact through the State Department and probably through their member of Congress. They could tell them, and they could get them to the right source.

We’ve got people already out and available to move into the U.S. and no place located, so that would be helpful. A number of parishes, I think, would step up and be willing to do that right now, and that’s something very tangible and very helpful. 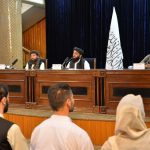 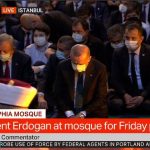