Coptic Christians in various parts of Egypt have been left with no choice but to hold funeral services in the streets because of the closure of their churches.

Coptic news site Watani reported on a street funeral last week in the village of Dimshau Hashim, in Minya governorate, where the houses of Copts recently came under attack by a mobprotesting against Copts gathering to pray in one of the Copt’s homes, since there is no village church.

The funeral of a 68-year-old Coptic man, Wadih Habib Henein, shown in the video below, was held on 6 September under tightened security.

According to World Watch Monitor’s local source, around the same time a funeral service for a Coptic woman was held in the streets of the village of Abu Greer, east of Dimshau Hashim, as, again, there is no church in the village, nor any nearby.

Similarly, in Asyut governorate on 31 August Copts in the village of Qasr Haidar held a street funeral after the village church was closed following protests by Muslims.

In the same governorate, a funeral service of a Coptic man was held outside St. Moses Church in the town of Dairout. The church was closed 20 years ago and since then the Christian community has not been able to receive a permit for its re-opening.

Following the disruption of a church service in Dimshau Hashim on 31 August, when 19 Muslims were detained after Coptic homes were also attacked, the Coptic community was invited to a “reconciliation session” with local Muslim leaders, but declined, Watani reports.

Bishop Macarius of Minya said recently that customary reconciliation sessions often have “the effect of sabotaging the legitimate and dutiful safeguarding of the rights of Christian citizens”.

Local human rights activist Ezzat Ibrahim said they “give a green light to repeat the same events and increase extremism” and called on the new governor of Minya to ensure they are not used as an alternative to criminal prosecutions.

Watani reported that the Coptic community in Dimshau Hashim started a three-day fast on 10 September to pray for peace in the village. 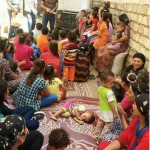 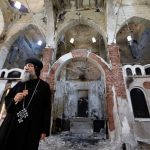