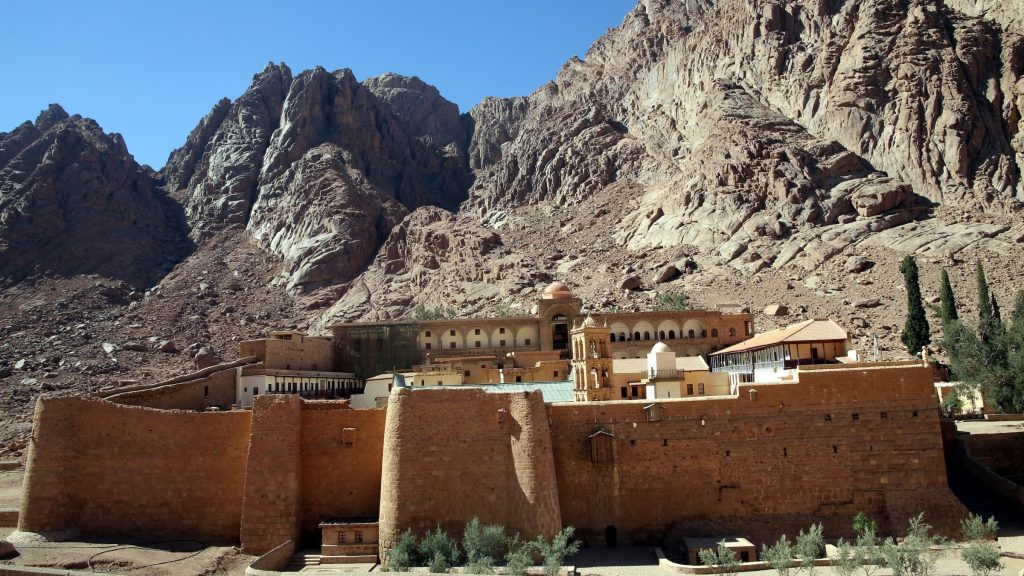 By Tom Whipple – The Times UK –

Ancient works not read by humans since the Dark Ages have been found at an Egyptian monastery, using a technique that allows researchers to reconstruct documents long ago scrubbed off parchment.

The finds at Saint Catherine’s monastery on the Sinai peninsula hailed a “new golden age of discovery”, according to the scientists behind the research, who believe that the methods could reveal many other lost texts.

They have been chronicling the monastery’s library, which has been in continuous use for 1,500 years, but which is today threatened by growing Islamic fundamentalism and attacks on Christians in the region.

Among the discoveries were three ancient Greek medical texts that were previously unknown to scholars, as well as the earliest copies of some from Hippocrates.

The scientists have also found documents written in extremely rare languages such as Caucasian Albanian, which until now has been known only from scattered stone inscriptions.

They said that the techniques being developed meant that lost classical texts, including those by thinkers such as Aristotle, could now be found hiding in plain sight on parchments in libraries across the world.

Because parchment was historically valuable, it was common to reuse it. Many ancient texts are believed to have been lost because monks wrote copies of the Bible on top of them.

The scientists use photographs taken using different parts of the light spectrum and from different angles, to highlight the traces of ink left by the earliest scribes before it was washed off. The images are then combined using computer algorithms to reveal the text beneath.

The work comes as such collections face increasing peril. In Sinai, security forces engaged in a deadly gun battle this year with militants. Isis claimed responsibility for the attack. Timbuktu library was saved from jihadists when a librarian hid its manuscripts.

Ancient remedies lie hidden behind monastery scriptures
It was already an extremely important manuscript. Preserved for more than 1,200 years by the dry desert air of Sinai, stored in the oldest continually operating library in the world, the document contained the first known copy of the gospels in Arabic.

Look carefully, however, and there seems to be something else. On one page faint spindly tendrils seem to be just visible behind the script. On other pages the ghosts of Greek words can be made out if you squint. 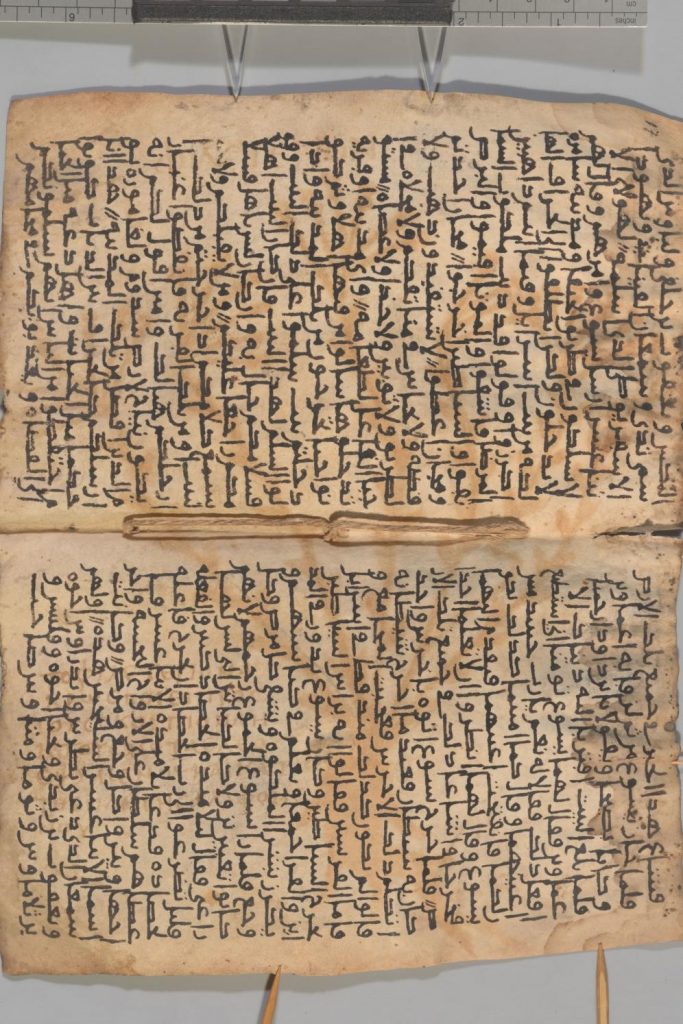 The monastery held the first-known copy of the gospels in Arabic.

Now scientists have used imaging technology to reveal what was hidden. This gospel was written on paper that previously stored texts from antiquity — and the tendrils came from a beautiful illustration of medicinal herbs.

That was just one discovery in a project to uncover the lost manuscripts of Saint Catherine’s monastery in Egypt, using techniques that could transform our understanding of the ancient world.

Built beneath the mountain where God revealed the Ten Commandments to Moses, Saint Catherine’s has collected thousands of manuscripts since its foundation in the 6th century.

“I don’t know of any library in the world that parallels it,” Michael Phelps, from the Early Manuscripts Electronic Library in California, said. “The monastery is an institution from the Roman Empire that continues operating according to its original mission.”

Many are worried if that mission will persist. The monastery has been threatened by the rise of Islamic fundamentalism. The UK Foreign Office advises against visiting after terrorist attacks near by.

While the monastery remains crucial in preserving ancient knowledge it has also destroyed it, like many institutions from a time when parchment was incredibly valuable. “At some point the material the manuscript was on became more valuable than what was written on it,” Mr Phelps said. “So it was deemed worthy of being recycled.” That was what happened to this particular manuscript. With the right sort of imaging, using both visible and non-visible light, what came before has been rediscovered.

Mr Phelps and his colleagues take dozens of pictures across the spectrum, then use algorithms to remove the most recent text and highlight what was previously there.

“Our chief imager came to me and said, ‘There are flowers in the undertext’. My first thought was, did someone press flowers in it in the Middle Ages,” Mr Phelps said. Instead though, they found a small medical library.

Some pages represented the earliest examples of known works from Hippocrates. Others were completely unknown; the flower turned out to be part of a recipe for treating scorpion stings. 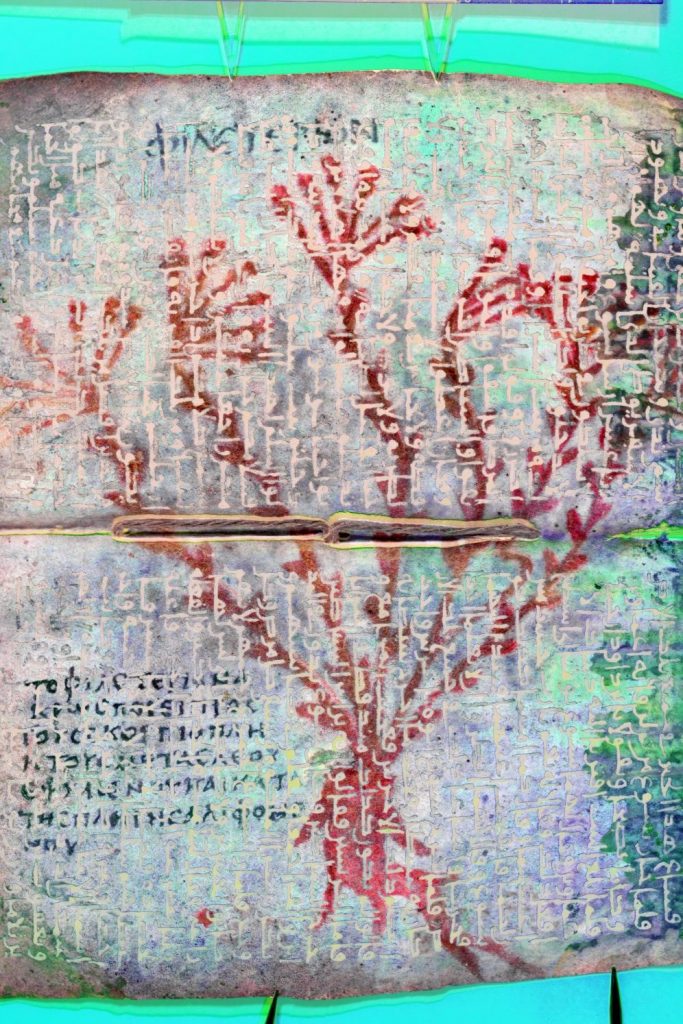 The discovery was announced at the headquarters of the Ministry of Antiquities in Cairo, alongside other finds including documents from almost lost languages.

“The age of discovery is not over,” Mr Phelps said. “In the 20th century new manuscripts were discovered in caves. In the 21st century, we will apply new techniques to manuscripts that have been under our noses. We will recover lost voices from our history.”

Archbishop Damianos of Sinai stated: “The recovery of these ancient medical texts highlight what the library of the Holy Monastery can teach us not only about the history of Christian spirituality in the Middle East, but also the history of science.”
__________________
https://www.thetimes.co.uk/edition/news/scientists-discover-lost-languages-in-find-at-egyptian-monastery-qkvd6l9ps
https://www.thetimes.co.uk/article/ancient-remedies-lie-hidden-behind-monastery-scriptures-q8db87233

Featured Image Photo Credit: The library at Saint Catherine’s monastery has been in continuous use for 1,500 years – KHALED ELFIQI 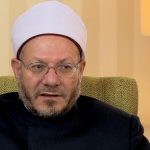 Egypt’s Grand Mufti Shawki Allam: We Do Not Have the Authority to Pronounce ISIS UnbelieversNews & Reports 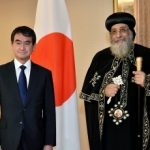