A bomb exploded at Cairo’s main Coptic Christian cathedral compound on Sunday morning, killing at least 25 people and wounding another 49, in the largest attack on a Christian house of worship in Egypt since 2011.

The blast went off on the women’s side of the worshiping hall in the small church of St. Peter and St. Paul, attached to the Coptic cathedral in the capital’s Abassyia district, state media reported.

No group has claimed responsibility for the attack, which was quickly condemned by the Egyptian government and the head of Cairo’s Al-Azhar mosque, the seat of Sunni Islamic learning and one of the world’s oldest institutions of religious teaching.

Survivors described the church as being packed with worshipers during a national holiday to celebrate the anniversary of the Prophet Muhammad ’s birth. The blast shattered the silence of the hall as those gathered listened to a sermon partly honoring a deceased church member.

“The turnout was bigger than normal,” said Tahani Gabriel, 65, who sat in the third row of the church. Her cousin Souad Atta, the widow of the man mourned, was in the first row and was killed, Ms. Gabriel said.

The death toll is expected to increase, and most casualties were women, Deputy Health Minister Sherief Wadee told state television. Egypt’s top prosecutor ordered all nearby surveillance cameras be reviewed as part of a criminal investigation, state media said.

The explosive was a 26-pound bomb possibly smuggled into the church in a handbag, an unnamed security official told state news agency MENA.

President Abdel Fattah Al Sisi, who has come under increased pressure domestically for failing to improve security amid an economic downturn, declared a three-day mourning period and promised that the perpetrators would be brought to justice.

It was the second bombing in greater Cairo in as many days, following a Friday attack claimed by little-known terrorist group Revolution Brigade, which killed six policemen near the Al Salam Mosque in Giza.

Some worshipers gathered around the church compound after Sunday’s blast, angrily chanting for Mr. Sisi’s government to resign. Others vowed unity in the aftermath of the carnage.

The explosion comes at a time of heightened tensions between Egypt’s Muslims and Coptic Christians, who account for about 10% of its 90 million population and have accused Mr. Sisi of not doing enough to protect them. Mobs attacked Christians in the city of Minya several times this year over accusations they were illegally building churches, as police were slow to quell the violence.

While some Christians have prospered in Egypt and the Coptic Church leadership remains a respected institution, many have long suffered from discrimination from employers and government offices that regulate the building of churches, leading many to leave the country.

The last major bombing targeting Copts came early on New Year’s Day in 2011 in the coastal city of Alexandria, detonating outside the prominent Two Saints Church and killing 23 people.

No group has ever claimed responsibility for that blast, though Egypt’s Interior Ministry has suggested it could have been the work of militants based in the neighboring Gaza Strip. The reasoning behind the ministry’s insinuation is unclear.

Survivors of Sunday’s blast recalled that attack, expressing little faith in the authorities.

“Did we learn anything about who was behind the Two Saints Church attack? It’s been six years,” said Qelleeni Farag, 80, as he searched for news of wife Sameeha, who had been in the church and whose condition was unknown.

Police guarding the church had been negligent, failing to conduct searches of worshipers carrying bags as they entered services, Mr. Farag said. A spokesperson for the Interior Ministry didn’t respond to requests for comment.

The lack of prosecution of those responsible for the 2011 attack in the ensuing years fueled speculation in Egyptian media and among both Islamists and Coptic activists that the government of then-leader Hosni Mubarak had staged it to distract from mounting public anger over his rule.

Since then, there have been sporadic but deadly confrontations between Egypt’s hard-line Muslims and Copts.

In October 2011, 28 people were killed when the military raided a peaceful protest in Cairo by Copts who had been demonstrating against the demolition of a church allegedly built without permits.

When Mr. Sisi staged a military coup in 2013, ousting Muslim Brotherhood official Mohammed Morsi , he made explicit promises to protect Egypt’s Christians and was supported by the Coptic Pope Tawadros II, who broke with tradition in expressing political views.

Since then, Coptic activists have accused Mr. Sisi of ignoring their requests for tougher security and the easing of strict measures regulating the building of churches. Meanwhile, hard-line Islamists have accused the church of plotting with Mr. Sisi to carry out the coup.

Egypt is struggling to defeat a growing insurgency based in the north Sinai, with terror groups led by the local branch of Islamic State regularly targeting government and military installations.

By DAHLIA KHOLAIF and TAMER EL-GHOBASHY

Photo: Egyptians shouted slogans as they gathered outside the Saint Peter and Saint Paul Coptic Orthodox Church in Cairo’s Abbasiya neighborhood after it was targeted by a bomb explosion on Sunday. PHOTO: AGENCE FRANCE-PRESSE/GETTY IMAGES 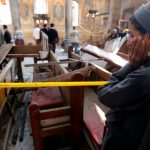 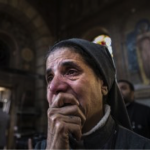