As Sunday Mass drew close to its end before 11am in Boutrossiya church (Church of St Peter and St Paul) in Abbassiya, Cairo, a bomb exploded amid the rear benches on the southern side of the church. Twenty-seven individuals lost their lives, and 65 were injured. The number of deaths is expected to rise, however, since many among the injured lie in hospital in critical condition and may not survive. Most of the victims are female, since this is the side of the church they usually sit in.

The attack immeasurably shocked and pained the Coptic community. A large number of Copts rushed to donate blood for the injured till the Health Minister Ahmed Emadeddin, who had been making a round of the hospitals to which the injured had been moved, announced at around 2pm that the hospitals had sufficient blood. Defence Minister Sidqy Sobhy had ordered that the injured could be checked into military hospitals for treatment and surgery.

Pope Tawadros II, who had been in Athens on a pastoral visit to Greece, decided to take the first EgyptAir plane back home; he is expected in Cairo in the evening and will preside over a collective funeral service for the victims tomorrow at the church of the Holy Virgin and St Athanasius in the Cairo eastern district of Nasr City. The Pope had been leading Holy Mass in Athens when he was told of the Boutrossiya church explosion; he proceeded with Mass till its end then directly contacted the Egyptian embassy to arrange for his speedy return home. Watani’s Victor Salama who was in Athens with the Pope says the patriarch was visibly pained and dismayed by the news.

President Abdel-Fattah al-Sisi called the Pope to offer his condolences, and proposed a State funeral for the victims, but no further details were given. The State declared a state of mourning for three days. Prime Minister Sherif Ismail and Interior Minister Magdy Abdel-Ghaffar offered their condolences to the Egyptian people and specifically to the Copts, and called upon the Egyptian people to stand hand-in-hand to fight the terrorists.

No group or organisation claimed responsibility for the bombing. Preliminary investigations by the prosecution and criminal laboratory officials point to an 8 -12kg bomb placed inside a lady’s bag that was left on one of the rear pews.

Watani’s reporters on the site said that the blood of the victims was spattered everywhere and that the place reeked with the stench of blood. The church, which was built in the early 1900s by the Boutros-Ghali family, and the crypt of which acts as burial place for the family, incurred extensive damage. Part of the ceiling caved in, the glass of the windows was shattered, the iron-frame window nearest the explosion was wrenched out its place and blown outside, the iconostasis and several icons were destroyed, as were the wooden pews. 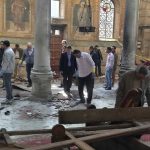 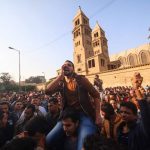