By The Economist, From the print edition – 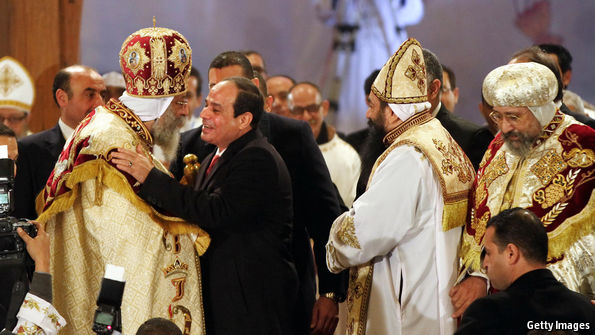 IT BEGAN with an argument over money, says a resident of Karam village in Minya. A shop-owner called Ashraf, a Coptic Christian, could not pay his Muslim suppliers. So they started a rumour that Ashraf was having an affair with a Muslim woman. In May a group of enraged Muslim men burned down his house along with several other homes owned by Christians. Ashraf’s elderly mother was stripped naked and dragged around the village.

Tensions are rising between Egypt’s two largest religious communities. The head of the Coptic church, Pope Tawadros (pictured above), says attacks against Christians, who make up between 5% and 15% of the population, occur about once a month. The Egyptian Initiative for Personal Rights (EIPR), a pressure group, counted 77 incidents of sectarian violence and tension in Minya, where there is a large Christian minority, since 2011. At least ten incidents this year have resulted in discord, death and destruction.

The EIPR’s count excludes a spate of violence three years ago, when protesting supporters of Muhammad Morsi, an Islamist president who was ousted in 2013, were violently dispersed by the government. In response, they burned dozens of churches. Since then Abdel-Fattah al-Sisi, a former general who deposed Mr Morsi, has tried to ease religious tensions. In 2015 he became the first president to attend (albeit briefly) Christmas mass at Cairo cathedral. “We’re all Egyptians, first and foremost,” he said. He attended again in 2016, vowing to restore churches and homes that had been burned down.

Pope Tawadros has staunchly supported Mr Sisi, whom he once referred to as a “saviour” and “hero”. But Christians are growing disenchanted with Mr Sisi’s lack of progress. “We were expecting it to be much better,” says Magdi Kemal Habib of Minya, who nevertheless backs the president. The church’s leader in Minya is more critical. “He just gives good feelings, but these feelings need to be translated into actions,” says Bishop Makarios. Christians still face discrimination in the job market and are under-represented in government. The authorities often treat them like second-class citizens. It is, for example, exceedingly hard to get the state to recognise conversions to Christianity from Islam.

When disputes with Muslims arise Christians say they are urged not to go to court. Instead officials rely on informal “reconciliation councils”. These invariably favour Muslims, who often face fines but no other punishment for crimes such as arson. Christians, on the other hand, tend to get harsh justice even for minor (or inane) offences: a teacher in Minya who filmed his students mocking the jihadists of Islamic State was convicted in court of blasphemy and sentenced to three years in prison. Four teenage students received sentences of up to five years in prison. Appeals are in the works, but a reconciliation council has expelled the teacher and his family from their village.

Sectarian violence often accompanies Muslim claims that Christians are trying to build new churches. The government has made church-building extremely hard by withholding permits; there are 2,869 churches in Egypt compared with 108,395 mosques. A new bill proposes to guarantee that building permits for churches will be processed within four months. Bishop Makarios does not expect it to pass; nor, if it does, to solve the problem. “Even if there is a law allowing Christians to build churches, there will be a security official who will stop them,” he says.

Some think the Coptic church has struck a Faustian pact with Mr Sisi. Despite the Bible’s direction to “defend the oppressed”, Pope Tawadros excuses the president’s human-rights abuses, while condemning the Arab uprisings of 2011 and echoing the government’s conspiracy theories. In return, Mr Sisi says all the right things. Last year he chastised Islamic scholars for not respecting other religions. “God did not create the world for the umma [Muslim community] to be alone,” he said. But Christians often feel that is exactly what Muslims in Egypt want. 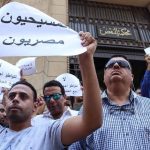