On May 19, the Christian man took his family and fled from the province of Minya for fear that they would be killed over rumors of his alleged affair. The following day, 300 Muslim men looted and burned not only his house but also six other houses in the province. In addition, the Muslim mob also took the Christian man’s mother and stripped her naked on the street, Reuters reports.

“They burnt the house and went in and dragged me out, threw me in front of the house and ripped my clothes,” the woman told Reuters in an interview. “I was just as my mother gave birth to me and was screaming and crying.”

During a talk show on the Dream TV network, Christian cleric Anba Makarios narrated how the mob beat the woman up in front of her home. They also forced her to walk naked through the streets while they chanted “Allahu Akbar” (God is great), the Associated Press relays.

Makarios added that the woman was so humiliated with what the Muslim mob did to her. It took her five days to gain enough courage to file a complaint with the police.

On Thursday, President Abdel Fattah al-Sisi released a statement condemning the attack. He also ordered authorities to apprehend those responsible for the attack. Plus, the Egyptian leader promised state-sponsored repair of the damaged properties within a month.

The Christian woman’s lawyer Ehab Ramzi told Reuters that his client is accusing three Muslims of dragging her out of her house and stripping her outside. Five men were reportedly arrested and 18 others were detained in connection with the mob attack.

In conservative Egypt, an affair between a Christian and a Muslim is considered taboo. Orthodox Copts, who make up 10 percent of the 90 million people in Egypt, have complained about the discrimination they have been suffering under the Egyptian rulers. 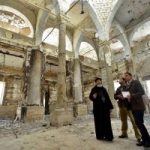