Threatened three times before arrest, he faces life in prison.

Mina Thabet, 26, director of the Minority and Religious Groups Department at the Egyptian Commission for Rights and Freedoms (ECRF), faces 10 charges filed against him under anti-terrorism laws that were signed into effect in August 2015. The charges include “inciting youth to use force to overthrow the government” and “inciting terrorist attacks on police stations.”

Mohamed El-Messiry, a researcher at Amnesty International, said the charges against Thabet are meant to silence or punish him for documenting persecution of religious minorities in Egypt, especially Coptic Christians.

“The charges are completely false and trumped up. There is no evidence in the case against Mina,” El-Messiry said, adding that the prosecutor has filed the charges under the direct instruction of the National Security Agency (NSA), a division of the Ministry of the Interior. “The prosecutor is dependent entirely on the police investigations only, and this is a pattern in most of the political cases now … The prosecutor basically copied accusations from the police report and pasted them into [its] charges.”

Days before his arrest, Thabet told Morning Star News that he expected to be detained or jailed by security officials in the near future. Officers from the NSA had contacted him three times over the past several months, he said, and told him that if he didn’t stop his activities they would “teach him to behave.”

Thabet was arrested in the early morning hours of May 13 in his Dar Al-Salam apartment on the outskirts of Cairo. On the afternoon of May 12, an officer from the NSA went to Thabet’s apartment. Thabet, who shares the apartment with his mother and brother, was not there, and the officer threatened to take his brother into custody, according to confidential sources. Eventually the officer backed down and left, they said.

Thabet’s mother called him, told him what happened and begged him not to return home, but Thabet chose to return, knowing that if he didn’t, the Ministry of the Interior would only abduct his 21-year-old brother in his place. At 3 a.m., the sources said, several heavily armed, plain-clothes security officers forced open the door to Thabet’s apartment and, without identifying themselves or producing a warrant, ransacked all the rooms, verbally abused Thabet’s mother and brother and then forced Thabet into an unmarked car.

For 12 hours officials detained Thabet and refused to answer any questions about where he was. The next day Thabet appeared in court, and a judge issued a temporary detention order against him, which was extended for 15 days. He is now being held without bail in pretrial detention. There is no word on the date of his next court hearing.

El-Messiry called the evidence behind the charges against Mina “ridiculous.” It consisted of an illustration of the Virgin Mary, a copy of the International Covenant on Civil and Political rights, papers on religious minority groups and a paper on Egyptian political party Bread and Freedom, he said.

Thabet also has been charged with using threats of violence to prevent the president from performing his duties, membership in a terrorist or banned group, using the Internet to incite a terrorist act, inciting protests, spreading false information about the country meant to disrupt public order and damage national prestige, harming citizens and the public interest and possessing documents that would incite people to overthrow the government and change the constitution.

Amnesty International called Thabet a prisoner of conscience “detained solely for exercising his rights.”
“He must be released immediately and unconditionally with all charges against him dropped,” a statement issued by the organization declared.

Thabet’s arrest is part of a larger crack-down against human rights activists and advocates by the military dictatorship of Egypt, but it also sends a direct message to the Christian community of Egypt that delivers a hard blow, human rights activists said. Thabet worked tirelessly documenting not only persecution but the government’s apparent apathy toward resolving any religious minorities’ problems.

Thabet researched and reported on the de facto Dhimmi status of Copts in Egypt; unexplained slayings of Copts in the Egyptian military; the disproportionate numbers of Copts in Egypt that are kidnapped for profit; a long-standing epidemic of violence against Christians in Egypt; “weaponized” blasphemy laws being used against the Copts; discriminatory laws against Christians regarding building houses of worship; and numerous acts of persecution against those who leave Islam to embrace Christianity. Mina was one of the founders of the Maspero Youth, a group of Coptic Christians seeking basic human rights and a member of the Coalition of Minority Groups.

“He has been one of the pillars [of human rights in Egypt],” El-Messiry said. “[His arrest] will definitely affect religious minorities in the country.”

‘Military Dictator’
Thabet’s arrest came less than a month after the arrest of Ahmed Abdullah, director of the ECRF, on April 25. Abdullah was a member of the banned Sixth of April group, a pro-democracy movement.

Because Abdullah and Thabet face essentially identical charges, El-Messiry said he thinks the government is trying to claim Thabet was part of the Sixth of April group. There is no evidence, however, that he was ever part of that group, according to those that know Thabet.

The government of President Abdel Fattah el-Sisi has arrested numerous human rights activists across Egypt and seemingly anyone who commits even a minor act of political dissent, sources said. In roughly one month, the NSA has arrested some 250 persons, including a leading human rights lawyer, members of a street theatre group, two dissident journalists, and 238 people protesting Sisi’s return of two islands in the Red Sea to Saudi Arabia. Other dissidents who haven’t been arrested have been harassed or had their assets frozen or seized.

The Sisi government has also banned public protests, some private group meetings, and almost any press coverage that diverges from the official state version of events – along with numerous other human rights violations.

Sisi came to power when, as the leading general in the Egyptian military, he led what came to be described as a popular coup against the government, then led by President Mohamed Morsi. While critics have often accused Morsi’s predecessor, President Hosni Mubarak, of leading a centralized authoritarian state, and accused Morsi of attempting to recast Egypt into an Islamist state, Sisi has come in for worse criticism. Human rights groups roundly accuse him of being nothing short of a military dictator who has made Egypt a country where rights exist only on paper.

While Sisi fights against supporters of the Muslim Brotherhood he deposed and against Islamic State-allied groups, he uses that fight as a thinly veiled excuse to crack down on anyone who says anything against the government, critics say. Even Christians demanding to be treated equally or be given their basic rights are now facing arrest or have already been silenced, said Safwat Samaan, chairman of Nation Without Borders, a human rights and development group headquartered in Luxor.

“These people are treated as terrorists,” Samman said. “This a problem facing everybody who works in these fields, and many have stopped writing, opposing, or objecting to what’s happening, afraid they will be arrested next.”
El-Messiry said Egypt’s fight on terrorism is hypocritical.

“While Egypt is portraying to the world that they are fighting terror and fighting terrorism, they are arresting Copts, and they are charging Copts with trumped-up charges that include belonging to a terrorist organization,” El-Messiry said. “They are not targeting the right people. They are just using counter-terrorism to silence any kind of dissent.” 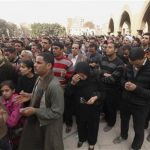 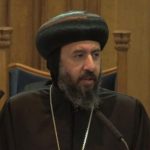 Statement by His Grace Bishop Angaelos, General Bishop of the Coptic Orthodox Church in the United Kingdom on the attack on the Coptic community in El Karm village, Menia, EgyptNews & Reports