“To date, no hearings have been set, no reparation has been provided, and no courts have sought to move the case forward.”  Such is how a recent report describes the plight of So‘ad Thabet, a Coptic Christian grandmother in her seventies living in Egypt.

On May 20, 2016, a mob of some 300 Muslim men descended on her home, stripped her completely naked, beat, spit on, and paraded her in the streets of al-Karm village (in Minya governorate) to jeers, whistles, and triumphant shouts of “Allahu Akbar.”

Her crime?  Her son was falsely accused of having a romantic relationship with a Muslim woman, which is banned under Islamic law, or sharia—the same body of teachings that prescribe the collective punishment of non-Muslim “infidels.”

Nearly six years later and still no justice for So‘ad Thabet, even though her abusers are well known.  “The case had been postponed several times and was closed in 2017 due to insufficient evidence,” states an Arabic language report. “However, the woman’s legal representatives filed a grievance reopening it again.  Then, in March 2019, the Minya felony court decided to withdraw from hearing the case due to embarrassment.”   After that, in October 2019, the case was postponed again, because a court member was reportedly absent.  Nearly a year after that, in September 2020, the court simply recused itself.  And now, according to the most recent reporting (Jan. 18, 2022), “Egypt’s courts still have made no efforts to pursue justice in the five and a half-year-old case.”

Such is Egyptian “justice”: while the humiliated, elderly woman resides outside her village for fear of “reprisals,” her tormentors, who are all known by name and face, still live and walk around there, freely and proudly.

Commenting on this delay, Adel Guindy, founding president of Coptic Solidarity and author of A Sword Over the Nile, which outlines the persecution Egypt’s Christians experienced over the course of fourteen centuries, said,

The judiciary system in Egypt, as well as the rest of the pillars of the state (often referred to as the “deep state”) have become impregnated with fundamentalist Islamic ideology, and are thus decidedly biased against Copts. The political leadership of the country takes no concrete corrective measures and, worse still, lets this ideology shape and dominate the society, through education and media.

The ongoing stalling of this relatively clear-cut case makes clear that Egypt’s Christian minorities are not just suffering from Islamists and criminals but from the entire system, a system which allows much impunity for those who would target Christians.  After all, a justice that moves as slowly as a turtle—constantly recusing and delaying—is just another form of injustice.

In the end, Thabet’s problem is that she is both a woman and a Christian—two characteristics that make her something of a nonentity in Islamic, uber-patriarchal Egypt.  This fact was very recently underscored: despite Egypt’s most indigenous population, its native Christians, the Copts, amounting for at least 10 percent of its population, on Mar. 3 ,2022, 98 female justices were appointed in Egypt—and not one of them was a Christian, all Muslims.

This would seem to suggest that being Christian is even worse than being a woman in Egypt—and that’s certainly saying something. 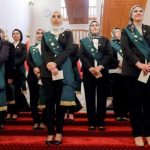 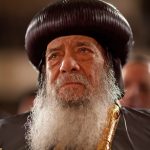