The recent execution of a Coptic Christian man in the Sinai is a reminder that the peninsula is a hotbed of wanton, jihadi terrorism in dire need of a crackdown.

Although the murder of 62-year-old Nabil H. Salama was videotaped in an Islamic State propaganda video—meaning it received some media attention in the West—much lesser known is that the Muslim terrorists have been terrorozing, massacring, and displacing the small Coptic community for years in the Sinai.

Early 2017 probably saw the worst atrocities.  Then, the Islamic State in Sinai had released a video promising more attacks on the “worshipers of the cross,” a reference to the Copts of Egypt; the terrorists also referred to the Copts as their “favorite prey” and the “infidels who are empowering the West against Muslim nations.”

Thereafter followed a massive “jihad” on the Copts; the following are some of the more notable examples, all occurring in early 2017, mostly in al-Arish, Sinai:

As a result of these 2017 slayings and threats of more to come, nearly 350 Christians living in al-Arish, Sinai, fled their homes, with nothing but their clothes on their backs and their children in their hands.  Most had congregated in a Coptic church compound in neighboring Ismailia by the Suez Canal.

In a video of these destitute Copts, one man was heard saying “They are burning us alive! They seek to exterminate Christians altogether!  Where’s the [Egyptian] military?”  Another Coptic woman yells at the camera,

Tell the whole world, look—we’ve left our homes, and why? Because they kill our children, they kill our women, they kill our innocent people!  Why? Our children are terrified to go to schools.  Why? Why all this injustice?!  Why doesn’t the president move and do something for us?  We can’t even answer our doors without being terrified!

Although 2017 witnessed this uptick of attacks on Copts, they had been attacked before and after.

Back in 2012, and in response to what Islamists perceived as Christian support for the popular revolts against then president Muhammad Morsi—Sinai’s Copts were heavily plummeted. Even though Muslim support for Sisi dwarfed Christian support, as Christians make only ten percent of Egypt, only they—the “uppity infidels”—were targeted for punishment: one priest, Fr. Mina Cherubim, was shot dead in front of his church; a 65-year- old Christian man was beheaded; several other Christians, including youths, were kidnapped, held for ransom, and later executed when the exorbitant ransoms could not be met.   Two churches were attacked, one burned.  Hundreds of other Christians were displaced.

It should not be imagined that Sinai Christians are only murdered when the jihadis have a special reason (such as 2012’s “revenge” spree against pro-Sisi Christians, or 2017’s ISIS video inciting violence against Copts).    For instance, In January 2018, three masked gunmen targeted and killed a 27-year-old man after identifying him as a Christian by the cross tattoo on his wrist.  According to his older brother, the siblings were walking home after work when the men “approached us and asked Bassem to show them the wrist of his right hand, and when they saw the tattoo of the cross, they asked him: ‘Are you Christian?’ Bassem answered ‘Yes, I am Christian,’ and repeated that again in a loud voice….  [T]hen they shot Bassem in the head. I could not believe what happened to my brother. He fell on the ground in front of me and I was unable to do anything….”

Similarly, in June 2016, Coptic priest, Fr. Raphael Moussa, 46, was randomly shot dead in “a hail of bullets” outside the Church of the Martyr of St George in Sinai.  And in January 2015, masked gunmen stormed the home of a Christian man residing in al-Arish.  After robbing him and his family at gunpoint, they shot him several times in the head, instantly killing him.  According to the slain man’s wife, her husband was murdered “only because he was a Copt.”  She pointed out that the masked intruders robbed everything in sight—including the money in his pockets, the jewelry she was wearing, her handbag, cell phones, and even a Bible.  Then, after stealing everything available, and for no practical purpose, they shot her husband dead.  A month later, another Christian man in al-Arish was randomly and fatally shot.

Nor is it just the “terrorists” who despise the Copts.  In 2019, after an ISIS attack in Sinai left eight Egypt security officers dead, the government responded by honoring the slain—except for one, a Christian.  Although seven schools were named after the seven slain Muslim officers, authorities denied this same honor to the sole Christian, Abanoub Nageh, citing “severe objections by the village Muslims that a school would bear such a flagrantly Coptic name as Abanoub.”

All of this is a reminder that the Sinai is a hotbed of Islamic terrorism, where ISIS is alive and well.  Moreover, it is well to remember that those who butcher Coptic Christians for no other reason than being “infidels” would butcher any non-Muslim, should the opportunity ever present itself. 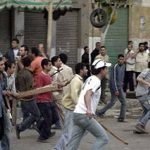