Osman Nuri Kabaktepe, a longtime friend and colleague of Erdogan, who was recently elected chairman of the ruling Justice and Development Party’s provincial organization in Istanbul, has deep links to a Turkish terrorist group responsible for the 2003 attacks that killed 58 people in Istanbul.

Based on court documents published today, March 1, 2021, Kabaktepe “was monitored by police intelligence over his alleged links to the Muslim Youth Organization (Müslüman Gençlik Örgütü), a group that functioned as a breeding ground for armed jihadist groups such as al-Qaeda.”  A wiretap that monitored Kabaktepe’s communications as far back as 2011 was submitted to court as evidence that he “was linked to the Muslim Youth terror group.”

The Muslim Youth Organization first emerged around 1985 and was led by a “radical” named Tahir Gul.  Its primary goal is “to set up a religious shariah state and dismantle the secular and democratic structure of the country’s governance.”

More telling of its intentions and motives, three of the Muslim Youth Organization’s members were not only arrested in connection with a 2003 al-Qaeda terror attack in Istanbul—where 58 people were killed during the bombings of two synagogues, the British Consulate General, and an HSBC bank—but they had met with then al-Qaeda leader Osama bin Laden and “were part of the five-member secret Shura Council (consultative body) that was involved in every step of the planning of the attacks. They were in the senior leadership of al-Qaeda’s Turkish network and were sending candidates for arms and explosives training in Afghanistan.”

Although Kabaktepe ran this very same Muslim Youth Organization/jihadi breeding ground, “Kabaktepe appears to have escaped the long arm of the criminal justice system and law enforcement”—and has now been rewarded as chairman of Erdogan’s ruling Justice and Development Party’s provincial organization in Istanbul—“thanks to the political cover provided by Erdoğan,” his longtime sponsor (pictures of them together go back to the early 1990s).

He was in the number two position at the Maarif Foundation, a Turkish government entity funded by Turkish taxpayers in order to promote the political Islamist agenda abroad through schools. He was a perfect choice for Erdoğan’s global ambitions considering the fact that Kabaktepe had substantial experience as the head of the youth branches in the religious Felicity (Saadet) Party, the Turkish equivalent of the Muslim Brotherhood that was established by the late Necmettin Erbakan, the founding father of political Islam in Turkey. He graduated from a faculty of theology after completing religious high school in his hometown of Fatsa in northern Ordu province on the Black Sea coast.”

Kabaktepe also “works closely” with the “controversial charity group the Foundation for Human Rights and Freedoms and Humanitarian Relief (İnsan Hak ve Hürriyetleri ve İnsani Yardım Vakfı, or IHH), a pro-government Islamist organization that was accused of smuggling arms to al-Qaeda-affiliated jihadists in Syria and Libya and acts as a hub for installing religious fanatics and zealots in government jobs with the help of the Turkish president’s family enterprise.”

But the plot continues to thicken; for we learn that the staunch Sunnis of Turkey and the staunch Shias of Iran—who are otherwise often presented as opponents—are working together for the overall Islamization of Turkey:

Turkish intelligence discovered connections between Iran’s Islamist Revolutionary Guard Corps (IRGC) Quds Force Turkish network, Selam Tevhid, and the Muslim Youth Organization. It appeared both organizations had a mutual interest in undermining the secular and democratic system in Turkey and replacing it with a religious regime run by mullahs.…  Many members of the Quds Force Turkish cells were arrested in Turkey in the late 1990s, and they were tried and convicted for murders and terrorist acts.

Yet and once again, Erdogan came to the rescue:

Most of them were later released under an amnesty granted by the government of Recep Tayyip Erdoğan and continued their nefarious activities. A fresh investigation into the Quds Force in 2011 was later hushed up by the Erdoğan government, and the prosecutors, judges and police chiefs who investigated the Iranian spy network were punished with dismissal, imprisonment and prosecution on false charges.

In short, along with funneling jihadis into Nagorno-Karabakh to slaughter Armenians, and sponsoring other terror groups in Syria, Libya, even Nigeria’s Boko Haram, here are more links between Turkey’s president and the scourge of global Islamic terrorism. 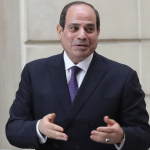 Egypt presents Biden a familiar conundrum: How to handle a ‘friendly’ authoritarianSelected Opinion 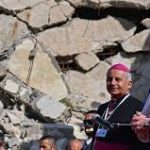