Seven plainclothes officers arrested Kamel at his Cairo home in the early hours of November 23, 2019.  State security personnel interrogated him for more than 12 hours.  They are charging him with being a member of a “terrorist” group, receiving foreign funding, and spreading seditious misinformation.  Kamel is currently at Tora prison, in southeast Cairo, where he is expected to undergo further questioning over the next two weeks.

These shocking if not absurd charges appear to be designed to silence Kamel—a leading member and one of the most vocal activists of the Maspero Youth Union, a Coptic human rights group that was formed during and played a major role in the January 2011 protests that ousted former president Hosni Mubarak.  Kamel is at the forefront of reporting on and sharing footage of the persecution of Copts in Egypt—which many observers believe to be his real crime.

This crackdown on Egyptian journalists and human rights activists has reached new levels under President Sisi.  Since last September, approximately 4,000 people have been arrested for participating in anti-government protests. Dozens of journalists and political writers have been arrested;  and more than 500 news and political websites have been blocked and censored in Egypt under Sisi. Just the day after Kamel’s arrest, police raided, detained, and then released three other journalists from Mada Masr, one of the only remaining independent media sources in Egypt.

Responding to this worsening crackdown on freedom, the United States Commission on International Religious Freedom announced on Sunday that it “is deeply alarmed by (the) arrest of Coptic activist Ramy Kamel,” adding, “Egypt must… fulfil its claims of reform and steps toward religious freedom,” and halt this “apparent renewed crackdown on activists and journalists.” 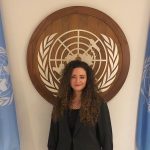