In his opening remarks Ambassador Sam Brownback told us that we are launching a global movement for religious freedom, tearing down the iron curtain of religious persecution.

Many here will have been disturbed by what they have heard today and be asking what can they do?

Thanks to Ambassador Brownback and the Potomac Declaration, and Plan of Action, a good beginning has already been made.

That Declaration insists“The freedom to live out one’s faith is a God-given human right that belongs to everyone. The freedom to seek the divine and act accordingly—including the right of an individual to act consistently with his or her conscience—is at the heart of the human experience. Governments cannot justly take it away. Rather, every nation shares the solemn responsibility to defend and protect religious freedom.”

This is the cornerstone of the movement we are building.

Just a week ago an Independent Inquiry reported to the British

Foreign Secretary that the persecution of 250 million Christians

“most shocking abuses of human rights in the modern era”.

They are the most persecuted group in the world.

The report specifically highlights the failure to declare as a genocide the murder of Christians Yazidis and other minorities in Iraq and Syria.

Our priority must be to bring perpetrators to justice.

And look at the consequences when we don’t.

In 1915 a slow-burn genocide, still unrecognised by the UK, took the lives of 1.5 million Armenian

on Musa Dagh, among the books suppressed and burnt by the Nazis.

Hans Morgenthau Sr the US Ambassador to the Ottoman Empire, called it ‘race murder’.

Hitler took the world’s indifference and unwillingness to insist on justice as a signal that he could butcher Jews, disabled people, gypsies, homosexuals, Roma and non-compliant religious minorities, famously saying,

“Who now remembers the Armenians?”

The Jewish lawyer Raphael Lemkin, 49 of whose relatives were

murdered in the Holocaust, was a student of those events. He coined

the word genocide, developing the Genocide Convention which

requires us to prevent, protect and punish.

Genocide begins when we ignore the“canary in the mine” and when we forget our duty to uphold justice.

Ignore it and it emboldens perpetrators who believe we are too weak or too disinterested to ever hold them to account.

In Armenia, in 1915, the wider World War was used as a reason not to act. During the Holocaust, claims that things could not be so bad,

triggered silence until it was very late. In Srebrenica, appeals for help were ignored, even by the commanders of European soldiers stationed nearby.

I visited Darfur during a Genocide that took 300,000 lives and displaced 1 million. I have visited the harrowing genocide sites in Rwanda, where we ignored the warning signs, too.

People were thrown from high buildings, prisoners burned in metal cages, women raped, and homes looted – atrocities against Yazidis Christians, and others, intensifying in number and scope .

The British House of Commons, the US Congress, the European

Parliament, and many others. declared these horrors to be a genocide.

But, even now, many Governments, including my own, refuse to name these crimes as genocide, saying it is a matter for the legal authorities, knowing that no judicial process exists to give this effect.

collection of evidence of these appalling crimes. But, through fear of veto by Russia, no mechanism was established to bring those responsible to justice.

There is little point collecting evidence if we do nothing about it.

Demonstrating their belief in the rule of law, like-minded nations,

signatories to the Genocide Convention, should establishad hoc tribunals and legal mechanisms of their own.

If we are launching a global movement for religious freedom fundamental to this must be a new deterioration to uphold justice.

The alternative is to allow mass murderers to grow old, unpunished and to believe they can continue their depredations with impunity, never facing their

Let me give another example.

I co-chair the British Parliamentary Group on North Korea, which I

have visited on four occasions.

An edict from Kim Il-sung once declared that,“religious people

should die to cure their habit”. And for 70 years that is exactly what has happened.

In 2014 a United Nations Commission of Inquiry, concluded that it is,

“a State that does not have any parallel in the contemporary world;

that Christians have been singled out for especially brutal treatment in

“the horrors of camps that totalitarian States established during the twentieth century”.

The Inquiry found“an almost complete denial of the right to freedom of thought, conscience and religion,”;and that “Severe punishments are inflicted on…people caught practising Christianity”.

During Hearings in Parliament we heard from two Christian women escapees from those camps. Jeon Young-Ok said: “They tortured the Christians the most.”Hea Woo said:”The guards told us that we are not human beings …the dignity of human life counted for nothing.”

Mr. JusticeKirby, who chaired the Inquiry said evidence adduced”was very similar to the testimony one sees on visiting a Holocaust Museum by those who were the victims of Nazi oppression”

But the UN Inquiry said no official or institution is held accountable, because“impunity reigns”.

So what have we done?

Despite urging a referral to the International Criminal Court, through fear of a Chinese veto, five years later, nothing has happened.

Not only this, but through their forcible repatriation of escaping Christians, China is in total breach of the 1951 Convention Relating to the Status of Refugees and the 1967 Protocol, and the Convention against Torture and Other Cruel, Inhuman or Degrading Treatment or Punishment, which it ratified in 1988. It prohibits the return of persons to States “where there are substantial grounds for believing” that they would be”subjected to torture.”

But this is unsurprising as Communist China has retreated from the welcome transformative reforms of Deng Xiaoping, into a new and brutal Cultural Revolution. Ambassador Brownback has said that the Chinese regime is“at war with faith.”

Show trials, executions, and the torture of prisoners are among its
hallmarks. Believers and their lawyers have disappeared. Churches and shrines destroyed. I have been in Western China and Tibet. I think of at least 1 million Muslim Uighurs detained without charge in Siberian-style re-education camps. What a disgrace that we sell face reconstruction and other surveillance equipment to a regime that has incarcerated its own people.

Or think of the treatment of Christians, Tibetan Buddhists and Falun Gong – which the European Parliament has called a “a new low point”.

After investigating forced organ harvesting from prisoners of
conscience, the independent China Tribunal recently found that crimes against humanity, as defined in Article 7 of the Rome Statute, have been committed.

Little wonder that millions of protestors in Hong Kong, fearful of losing their right to religious freedom and political freedoms have taken to the streets singing as their anthem,Hallelujah to the Lord. I salute the courage of the people of Hong Kong.

When you ignore the canary in the mine it leads to the incarceration of Uighurs in China, the unfolding Jihad in Nigeria, the burning alive of
Christians in Pakistan, the displacement of Muslim Rohingya and Christian Kachin in Burma – and to genocide. Genocide unchecked; Genocide unchallenged; Genocide unpunished.

After Raphael Lemkin died, in 1959, the world went silent regarding the Genocide Convention.

Then in 1957 William Proxmire, was elected to the Senate, in
Wisconsin. A friend introduced him to Lemkin’s legacy .

Ten years later he rose in and told the Senate that lack of ratification was a national disgrace.

He did the same on 3211 occasions, speaking every day the Senate was in Session – finally getting ratification in 1986. Often caricatured as an irritating gadfly – but there’s a lot to be said for the awkward squad in politics.

Proxmire’s successors need to return to rise up in legislative fury and with an urgent sense of social and political righteousness.

This is not onlyright but also hard headed and sensible

Consider how religious persecution from Eritrea to Pakistan, North Korea to Sudan, adds vast numbers to the flow of refugees and how persecution correlates to the hobbled economies of the countries from
which they flee.

Societies that have religious freedom are the most prosperous and the least dependant on foreign aid and military assistance.

But to enable more countries to take this as their lose star we need to do the heavy lifting designing and advancing new legal routes to justice for the persecuted.

And we need to shape our aid programmes – which are too often religion blind – and promote international policies to reflect this priority: and do it because it is the right and the wise thing to do.

The suffering and the pain which we have heard about today requires those of us with the privilege of political freedom to demand justice and human dignity for those who do not enjoy these freedoms.

We cannot afford the luxury of silence.

The Protestant theologian, Dietrich Bonhoeffer, executed by the Nazis famously said,“not to speak is to speak, not to act is to act”.

In contesting the persecution of millions, including 250 million
Christians, truly described as,“the most shocking abuses of human rights in the modern era”,future generations will judge us on how we responded.

What are we going to do about it? Now, not later 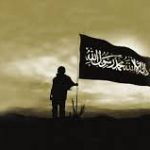 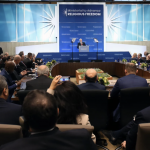