Islamic terrorists massacred over 300 people in a series of bombings that rocked Sri Lanka on Easter Sunday, April 21. Three of the most lethal bombings took place in packed churches celebrating the resurrection of Christ.

Although many expressed dismay—including a Sri Lankan Archbishop who said that “we never expected such a thing to happen and especially on Easter Sunday”—Islamic terror attacks targeting Christians during or around Easter are hardly uncommon.

While the parallel of bombing churches and massacring Christians around Easter are evident, there is another, more subtle—and more ludicrous—parallel.  In both the Sri Lankan and Egyptian example, the Islamic State, which claimed both attacks, cited “grievances” to justify their terrorism, which they apparently seek to portray as “retaliation.”

Speaking two days after the attack a junior defense minister in Sri Lanka said that “preliminary investigations have revealed that what happened in Sri Lanka was in retaliation for the attack against Muslims in Christchurch,” where a New Zealand man killed around 50 Muslims in two mosques last month.

Similarly, and though unbeknownst to most, the Islamic State cited “grievances” to justify its grisly slaughter of 21 Christians—20 of whom were Coptic Christians—on the shores of Libya in 2015.

An article in Dabiq, the Islamic State’s online magazine in English, titled “Revenge for the Muslimat [Muslim women] Persecuted by the Coptic Crusaders of Egypt” claimed that the 21 Christians were slaughtered in “revenge” for two Coptic women who, back in 2010 and according to Islamic propaganda, were compelled by Egypt’s Coptic Orthodox Church to recant their conversion to Islam and return to Christianity.

Indeed, back then, the late Coptic Pope Shenouda III was portrayed as “a U.S. agent, an abductor and torturer of female Muslim converts from Christianity, who was stockpiling weapons in monasteries and churches with a view to waging war against the Muslims and dividing Egypt to create a Coptic State.”

Such is Islamic propaganda and projection—always accusing others of what Islamists habitually do.

The Islamic State magazine further cited the 2010 bombing of Our Lady of Salvation Church in Iraq as a product of “revenge” for those same supposedly forced-to-reconvert-back-to-Christianity women in Egypt.  Then, armed jihadis stormed the Iraqi church during worship service, opened fire indiscriminately before detonating their suicide vests, which were “filled with ball bearings to kill as many people as possible.”  Nearly 60 Christians—including women, children, and even babies (pictures of aftermath here)—were slaughtered.

Two points give the lie to all such claims of Islamic “retaliation” due to “grievances”:

First, since when did Islamic terrorist organizations that regularly preach hate for the other—chief among them the Islamic State—ever need a reason or excuse to make the lives of non-Muslims, chief among them Christians, miserable?  For instance, since July 2011, I’ve been compiling monthly “Muslim Persecution of Christians” reports (published by Gatestone Institute).  In virtually every one of these monthly reports (currently 91), Muslims bomb, burn, or ban churches and generally terrorize Christians.  Are we seriously to believe all this is due to “grievances” against the disempowered Christian minorities in their midst?

Second, what exactly do brown Sri Lankan Christians have to do with a white terrorist in New Zealand?  What did the Iraqi Christians of Our Lady Church, or the one decapitated Ghanaian, have to do with the imagined crimes of the Coptic Church?

Indeed, and as discussed here, secular Western actions that have absolutely nothing to do with Christianity are regularly cited by Muslims who vent their wrath on the vulnerable Christian minorities in their midst.

This goes back to the Middle Ages, when Muslims such as the “magnanimous” Saladin “retaliated” against European Crusaders by crucifying Coptic Christians in Egypt and tarring their churches in “retaliation” to Frankish Crusaders (as documented in Adel Gundy’s forthcoming book, A Sword Over the Nile).

In short, past and present, Muslims have not needed “grievances” to attack Christians and other “infidels”—though they’ve always been happy to cite them before naïve ones. 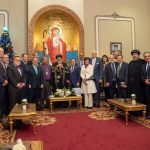