Seven pilgrims — including a 12-year-old girl and a 15-year-old boy — were shot to death. More than 20 were left injured with bullet wounds or shards of broken glass from the buses’ windows. “I pray for the victims, pilgrims killed just because they were Christian,” saidPope Francis after the attack.

Pictures posted on social media reveal “bodies soaked in blood and distorted faces of men and women.” In one video posted, a man can be heard crying, “The gunshot got you in the head, my boy!” and repeating, “What a loss!”

After the first and largest bus had passed the ambush point, the terrorists emerged in black 4x4s and opened fire with automatic weapons on the second bus; six pilgrims were injured, including a small child. Fortunately, the bus driver managed to escape and speed away, at which point the terrorists fired on the third and smallest bus as it approached. After the driver was killed, they surrounded the stalled minibus and opened fire on all sides. The bus carried 20 people — 14 adults and six children — all from one extended family who had visited the monastery to baptize two of the children.

The terrorists first opened the hatchback and looked to see who was still alive. They then shot all the men in the head and all the women and children in the ankles or legs.

One of the female survivors who was shot in the legs recalls, in a video, only that an explosion of gunfire suddenly opened on all sides of their bus; by the time she could register what was happening, she saw pieces of her brother-in-law’s brain splattered on her lap.

In a separate report, another survivor said the terrorists told her, “We will kill the men and children and leave you to live the rest of your lives in misery.”

Virtually all of the survivors have “had a nervous breakdown of what they have seen and they are in the hospital.”

Coptic Bishop Anba Makarios of Minya confirmed that “The pilgrims were killed in such a savage and sadistic way, as if they were enemy combatants, when they were just simple Christians come to get a blessing from a monastery.”

Reactions among Egypt’s Christians echoed those from earlier incidents. “Oh God, these children were students in my school!” wept one local teacher. “I can’t imagine they are dead now!”

The day after the attack, the Egyptian government created more questions than answers. It announced that it had killed 19 terrorists believed to be complicit in the November 2 attack. As one report noted:

“With the suspects now dead, it is impossible to confirm whether they were indeed involved in Friday’s attack. Fear continues to permeate the Christian community in Egypt.”

Another report stated that government photos of the purported slain terrorists “appear staged in a manner which mirrors past examples of Egyptian security forces executing suspected terrorists.”

The attack was a virtual duplicate of another that occurred on May 26, 2017. Islamist gunmen ambushed buses full of Christians returning from the same monastery. Twenty-eight Christians — ten of whom were children, including two girls, aged two and four — were massacred. According to accounts based on eyewitness testimonies, the terrorists had ordered the passengers to exit the bus in groups:

“… as each pilgrim came off the bus they were asked to renounce their Christian faith and profess belief in Islam, but all of them — even the children — refused. Each was killed in cold blood with a gunshot to the head or the throat.”

Discussing the recent massacre with Bishop Makarios, a television interviewer said, “this is a duplicate of the same event and same place that happened a year and five months ago — how can this be? What does it mean?” Makarios replied, “Honestly, those best positioned to answer this question are the state authorities…. I add my voice to yours and ask the same questions.”

“That the same attack occurred in the same place only means that, despite all the talk, protecting Egypt’s Christian minority is not on the government’s agenda,” Magdi Khalil, Egyptian political analyst and editor of the Egyptian weekly Watani International, told Gatestone by phone.

Despite Egyptian President Abdel Fattah el-Sisi’s many conciliatory and brotherly words to the nation’s Christian minorities, they have suffered more under his rule than any Egyptian leader of the modern era, partially because ISIS arose during his term. In December 2017, a gunman killed 10 worshippers inside a church in Helwan. One year earlier, 29 Christians were killed during twin attacks on churches. On Palm Sunday in April 2017, a suicide bombing of two churches killed nearly 50 people and injured more than a hundred.

Coptic Solidarity, a Washington, DC-based organization dedicated to the human rights of Egypt’s Christians, condemned the Novemnber 2 attack in a press release:

“Coptic Solidarity reiterates the message published after the May 2017 attack, that the Egyptian government has failed to protect its Coptic minority. Coptic Solidarity strongly maintains that this violence is not perpetrated by foreign terrorists as the Egyptian government would like the world to believe, but is homegrown, one created by a culture of hate and impunity within Egypt.

“Consequently, Coptic Solidarity holds the Egyptian government fully responsible and calls for a transparent investigation of these attacks, and to institute serious measures to prevent future attacks. The minimum response expected from president El-Sisi is to dismiss the head of State Security and the governor of Minya, as a clear sign of holding officials accountable. Furthermore, given the government’s continued failure to protect the Copts, Coptic Solidarity vigorously calls for an independent inquiry by the UN to evaluate the Copts’ situation and to recommend necessary measures to alleviate their increasingly perilous situation and to avoid repetition of the tragic situation of Christians in Iraq and Syria.”

“Our lives have turned into hell,” said one man. “I’m a Copt and I curse myself every day for bringing [Sisi] to power. He failed us. He sold us.”

“Who can accept these incidents?” asked another Christian, discussing the recent massacre. “Every day, there are many incidents harming Christians. We must leave our land and get out of here. I’m so exhausted… it’s so dull and dark these days.”

Raymond Ibrahim, author of the new book, Sword and Scimitar, Fourteen Centuries of War between Islam and the West, is a Distinguished Senior Fellow at the Gatestone Institute and a Judith Rosen Friedman Fellow at the Middle East Forum. 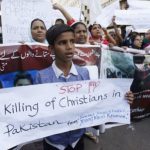 Question in the UK House of Lords: Asia Bibi case raised along with aid to PakistanSelected Opinion 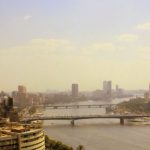