By Brian Dooley – The Hill –

The Egyptian government’s human rights record is now even worse, yet the State Department, under Secretary Mike Pompeo, this announced that it would lift the hold on the funding. The move squanders Washington’s leverage on President Sisi’s regime and undermines those fighting for freedom in Egypt.

Last week I traveled to Egypt and spoke with activists targeted for peaceful dissent. Some face many years in jail if the regime follows through on charges. The police and security service routinely torture detainees with techniques such electric shocks, beatings and rape. “To me, an Egyptian living in Egypt, I see no improvement in the human rights situation,” said Mohamed Zaree of the Cairo Institute of Human Rights Studies, winner of the 2017 Martin Ennals Award for Human Rights Defenders.

President Sisi recently ratified a draconian law restricting the work of NGOs, essentially making it a crime to advocate for human rights and development. And just this week, the government announced further restrictions on the use of social media, and parliament passed a law giving senior military commanders immunity from prosecution for the killing of protestors in 2013. It’s widely assumed that Sisi will soon change the constitution to abolish term limits for the presidency.

Civil society leaders told me they want the United States to keep the holds on the aid and to expand human rights conditions. “The military aid is the only thing the authorities here care about,” said one. “It’s the best card for the Americans to play.”

Withholding the aid was beginning to have an effect. The authorities had agreed to order a retrial in the notorious 173 Foreign Funding Case, in which a criminal court sentenced 43 employees of foreign NGOs to up to five years in jail and ordered the closure of the International Republican Institute, the National Democratic Institute, Freedom House, the International Center for Journalists and the Konrad Adenauer Foundation.

When the Court of Cassation announced a retrial in April this year, civil society leaders hailed this as a welcome first step. The hearing, however, has been postponed until Nov. 11. At the very least, the State Department should have waited to see progress on this case before lifting the holds.

Secretary Pompeo now has to decide by Sept. 30 whether to release a further $195 million in FMF. It’s hard to see how he can certify progress on human rights. He should recognize that the repression is not only inflicting suffering on Egyptians but also weakening U.S. nation security. Ascendant in Egypt, ISIS is recruiting in the prisons and otherwise feeding off resentment caused by government abuses. The United States can’t afford to allow Egypt to slide further into a dictatorship.

Secretary Pompeo should make clear that further FMF won’t be released until there is real movement on Case 173 and other human rights violations. If he doesn’t, Congress should deny funding until Egypt satisfies specific conditions. Sens. Marco Rubio (R-Fla.), Robert Menendez(D-N.J.), among others, have spoken out against the crackdown on civil society, and Sen. Patrick Leahy (D-Vt.) is blocking $300 million in FMF unless Egypt meets human rights requirements, including a proper inquiry into the 2016 torture and murder of Italian student Giulio Regeni.

Washington needs to rethink its relationship with Cairo. Appointing an ambassador to Egypt would be a start, but real progress will happen only if the United States demands it. The Trump administration has leverage in the form of military aid. It should use it.

Brian Dooley is Senior Advisor at Human Rights First where he works to contain and counteract a U.S. retreat from global leadership on human rights. @dooley_dooley. 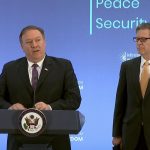 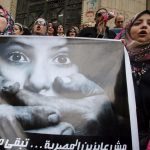