By Ewelina U. Ochab – Forbes –

What does football (soccer) have to do with religious freedom? Not much, one would have thought. However, Egypt may be saying otherwise.

As Egypt qualified for the World Cup 2018, for the first time since 1990, the issue of discrimination against religious minorities in Egyptian football started circulating in the news. The stories focused on a recent report published by Coptic Solidarity, an organisation advocating equal citizenship for the Coptic Christians of Egypt, Egypt’s biggest Christian denomination. The report revealed that being a Christian footballer in Egypt is a significant obstacle to a professional career.

According to the report, despite the fact that Coptic Christians constitute approximately 10% of the Egyptian population, ‘During the past half-century, an infinitely small number of Coptic footballers – no more than 6 – have managed to join top-flight soccer clubs.’ Of more concern, ‘there are currently 540 players in the top-flight soccer clubs in Egypt, and that number includes only one Coptic footballer.’ The report further identified 25 cases of Coptic Christian football players allegedly being marginalised or discriminated against because they belong to the Christian minority group.

Getting the call to represent your state at a major sporting event should be the result of a certain mix of skill, talent, ability to perform under pressure and other qualities. Religion should not matter. The news from Egypt sheds a different light on football and questions whether religious discrimination may, in fact, be entrenched in some countries.

The Coptic Solidarity group is not the only organisation throwing the spotlight on this discrimination. Ahmed Hossam, also known as Mido, a Muslim Egyptian football player, has drawn attention to the same issue in an interview when he said: ‘There are many Christian children who are not allowed to continue to play because of the racist attitude of certain coaches. I have proposed that Christians should make up at least 10% of all junior teams in order to resolve this problem.’ (translation provided by Coptic Solidarity). Another report suggests discrimination against Egyptian Coptic Christian teenagers in football and other sports.

In June 2018, Coptic Solidarity submitted a report highlighting the issue of religious discrimination to FIFA, the international governing body responsible for some of the football’s major international tournaments, including the World Cup. It was accompanied by a formal complaint, similar to the one Coptic Solidarity made in 2016. FIFA has yet to address either. It remains unclear whether FIFA is looking into the report or seriously considering the complaint and if it is, when and what the conclusion might be.

FIFA should be taking the complaint seriously. After all, it has clear self-established obligations to combat discrimination. Article 4 of FIFA Statutes (as updated in 2016) declares that

Discrimination of any kind against a country, private person or group of people on account of race, skin colour, ethnic, national or social origin, gender, disability, language, religion, political opinion or any other opinion, wealth, birth or any other status, sexual orientation or any other reason is strictly prohibited and punishable by suspension or expulsion.

While in 1962, Article 2 of FIFA Statutes was updated to incorporate an objective of FIFA ‘to prevent racial, religious or political discrimination or distinction among players whether their status be amateur, non-amateur or professional’, the 2016 version does not include it and the religious discrimination element is incorporated only at Article 4 and not as one of the duties of FIFA to upheld. It is unclear why this duty was removed from FIFA statutes. The logical conclusion to be drawn is that knowing of the ever-present issue of discrimination in football, FIFA decided to remove the duty that it could not achieve. Of course, this is pure speculation.

Nonetheless, FIFA’s guide on Diversity and Anti-discrimination incorporates a similar duty (although weaker in wording):

FIFA recognises its responsibility to lead the way in abolishing all forms of discrimination in our game, but also to make the most of the influence football has beyond the pitch, thereby contributing to the fight against this scourge of society.

Football is meant to unite nations, unite people of different background and unite people of different religions, beliefs and views. At least, this is why I fell in love with football (and not just because of David Beckham). Football should not be used as a means to discriminate against any minority group, whether religious, ethnic, national or other. The World Cup may be almost over; however, the story is far from it. If FIFA does not address the issue, this discrimination will continue. FIFA should consider how minorities are represented within the Egyptian delegation and also in other countries to ensure that football is inclusive and does not reinforce discrimination. Your move, FIFA.

______________________
Photo Credit: A young Egyptian boy throws his ball up in the air while playing football in Bairat on the West Bank of Luxor, Nile Valley, Egypt. (Photo credit: Richard Baker/In Pictures via Getty Images). 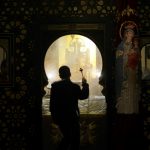 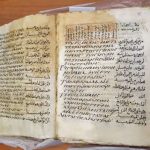