Khalil, who comes from a Christian family, is also accused of “administering a Facebook page that promotes atheism.”

“The Facebook page has been used to distort, defame and exploit the Quran. It was also found to contain comments questioning the existence of God,” chief of the Dokki prosecution office Hassan Ali was quoted as saying by the privately owned Youm7.

“During his interrogation by prosecutors, Khalil confessed to being an atheist and to creating the Facebook page to share his views on religion,” according to Youm7.

Khalil’s prosecution is the latest in an increasing number of blasphemy prosecution cases in Egypt in recent years, sending a chilling message to atheists who are now more afraid than ever of opening up about their loss of faith.

“Atheists in Egypt are afraid to publicly come out as such,” Hazem, 35, told Al-Monitor. “If you proclaim yourself a nonbeliever, you literally open the gates of hell; you stand to lose many of your friends and will be treated like an outcast. Your own family may accuse you of mental illness and possibly disown you. We are being forced to live as hypocrites for fear of facing discrimination and harassment.” Hazem, who asked to be identified with a pseudonym for his protection, was born and raised a Muslim but became an atheist when he turned 18 “after reading books on Islam and Christianity and listening to religious debates that left me unconvinced.”

Ahmed Harqan, another atheist activist, told Ahram Online that he was attacked on the street after expressing his views on television in January 2015. When he went to the police station to file a report, he was jeered at and insulted by security personnel. “They handcuffed and physically assaulted me and refused to allow me to file the complaint,” Harqan was quoted by the semi-official Ahram as saying. He was fortunate not to have been detained, but his experience is all too common, bearing witness to the systemic discrimination and hostility atheists face in the conservative society.

While the situation has always been difficult for atheists in Egypt because of the social stigma associated with nonbelief, “things are now even worse than in the past because of a rise of conservatism and a government crackdown, not just on atheists, but on liberals in general,” Hazem lamented.

Following the 2013 overthrow of Islamist President Mohammed Morsi, Egyptian authorities launched a crackdown on dissent that initially targeted the ousted president’s supporters but which later widened, targeting also liberal activists including many who had risen against Morsi: journalists, members of the LGBT community and now atheists.

The Egyptian parliament has in recent days discussed a proposed bill to criminalize atheism. The draft law was submitted by Amr Hamroush, the head of parliament’s Committee on Religion, who argues that lack of belief in God is a form of contempt of religion (something punishable by up to five years in prison under Egyptian law).

“Atheism rates are on the rise in Egypt. It is a dangerous trend that needs to be curtailed as it threatens the very fabric of our society,” he said, adding that religious institutions have a major role to play in countering the phenomenon.

In the conservative, majority-Muslim country, statistics on atheism are scarce. But while the exact number of atheists in Egypt remains unknown, Dar al-Ifta (the authority responsible for issuing religious edicts or fatwas) has claimed that Egypt harbors the largest number of atheists in the Arab world. The claim was based on highly questionable figures released by “a regional polling group” that estimated there were around 866 atheists in the country in 2014 (roughly 0.001% of the population), according to local media reports. Hazem is skeptical, calling the statistic “highly unrealistic.”

“The real numbers are much higher. This is merely a continuation of the old state policy of officials burying their heads in the sand,” he said, in reference to the survey’s results.

Hazem, like other activists who had hoped the fall of the Muslim Brotherhood regime would usher in a new era of greater freedom and more openness, is now deeply disappointed.

“I was optimistic back in 2015 when I heard President [Abdel Fattah al-] Sisi’s promises that religion would never again have a say in politics. I believed he would steer the country toward a more liberal direction. It hasn’t happened,” he said.

The prosecution of a prominent filmmaker over accusations of contempt of religion for a “controversial” scene in his film and an attack on a church in the district of Giza on Dec. 22 by a mob calling for the church’s demolition are just some of the recent developments signaling a trend of growing conservatism and increased intolerance in the society. Film director Amr Salama was summoned for interrogation by prosecutors on Dec. 18 over his film “Sheikh Jackson,” Egypt’s submission for the Oscars. This happened after a lawyer filed a legal complaint against the filmmaker and the film’s cast, accusing them of “defaming Islam.” The lawsuit was prompted by a scene in the film that shows a Michael Jackson lookalike dancing inside a mosque as worshippers pray. The film has since been referred by prosecutors to Al-Azhar for review to determine if it is indeed “blasphemous.”

Salama’s prosecution comes on the heels of several high-profile convictions over contempt of religion charges since the coup against Morsi in 2013. Blasphemy convictions have intensified under Sisi, with more such cases and convictions during his era than during the Morsi era. Despite his pluralistic discourse, Sisi is appeasing the ultraconservative Salafists who supported him in the 2014 presidential election in the conviction that any secularist tendencies on his part would undermine his base in the street, say analysts.

Hence the persistent harassment of anyone who dares express an ideology other than Islam. In January 2016, writer and poet Fatima Naoot was sentenced to three years in prison over a Facebook post in which she criticized the Muslim tradition of slaughtering sheep during the Feast of Sacrifice (Eid al-Adha) as “a horrible massacre.” Ten months later, a misdemeanor court reduced the sentence to a suspended six-month jail term. While Naoot is “relieved” she has not been imprisoned, she regrets not having been acquitted and describes the blasphemy laws as “a tool of intimidation used against writers and other high-profile figures to distract them from their serious work.”

Rights groups attribute the rise in blasphemy prosecution cases in the last three years to a controversial clause (Article 98) in the criminal code that specifies a sentence of between six months and five years for acts that “exploit religion with the aim of provoking sedition, disparaging one of the three monotheistic religions or any sects belonging to it or harming national unity or social peace.”

Efforts by a group of liberal lawmakers to abolish the disputed clause on grounds that it leaves the definition of blasphemy vague, have thus far proved futile. The group faced stiff opposition from conservative members in parliament and from judicial authorities when they suggested removing the restrictive clause in June 2016. Their proposal has since been shelved and the controversy around it has died down; meanwhile, the blasphemy cases continue unabated.

Amr Ezzat, religious freedom officer at the Egyptian Initiative for Personal Rights, believes, however, that a tolerant, open society and an impartial judiciary are more important than changing the law. “The real problem is that the state has left anyone expressing ‘unorthodox’ beliefs outside the realm of its protection. The police, prosecutors and the judiciary are often on the same page as those that file the contempt of religion lawsuits,” he said.

Shahira Amin is an award-winning journalist based in Cairo. Former deputy head of state-run Nile TV, she quit her job at the height of the Jan. 25, 2011, uprising to protest censorship of her work. She has since worked as a freelance writer for Index on Censorship, Freemuse, CNN and other news websites, and as a filmmaker producing documentaries for UN agencies. She has been writing for Al-Monitor since January 2016. 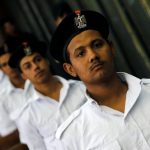 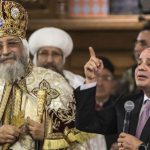