Coptic Solidarity strongly condemns the hateful vile anti-Semitic attack on the Tree of Life Synagogue in Pittsburgh on October 27, which took the lives of eleven worshipers and wounded six. As the targets of numerous church attacks and religious persecution themselves, Copts empathize with the Jewish community and extend their heartfelt condolences.

The perpetrator, Robert Bowers, has been described as a white supremacist who had reportedly posted many anti-Semitic statements on social media including one just prior to carrying out his attack. The content of these posts revealed his belief in outlandish conspiracy theories regarding Jews.  Reports indicate that Bowers entered the Synagogue during Shabbat services and opened fire while shouting anti-Semitic statements including “all Jews must die.”

The US Declaration of Independence affirms that “All men are created equal” and freedom of religion is the first right guaranteed in the US Bill of Rights, signifying its foundational importance. Religious freedom is also enshrined in article 18 of the UN Declaration of Human Rights and the International Covenant on Civil and Political Rights, in an effort to ensure that individuals across the world are able to exercise freedom of conscience and practice their religious beliefs alone, or in community.

Saturday’s attack was not only an egregious attack on Jews, but also an attack on all those who believe in freedom of religion and sanctity of human life. It exposes the ugly face of violence as a means of treating those who do not share one’s faith or worldview. Incitement and carrying out acts of violence against minority ethno-religious communities has been on the rise worldwide, and most notably throughout the Middle East against Copts, Yezidis, Assyrians, Chaldeans, and atheists.

Unchecked ideologies that promote hatred of “the other,” and religious intolerance underlie the same types of violence worldwide. Such ideologies should be universally condemned, and perpetrators of religious violence should be brought to justice.

_____________________________
Photo Credit: A woman stands at a memorial outside the Tree of Life synagogue after a shooting there left 11 people dead in the Squirrel Hill neighborhood of Pittsburgh on Saturday. Brendan Smialowski/AFP/Getty Images 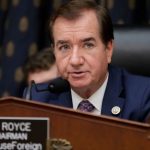 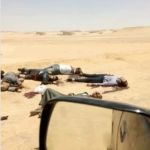