Three officers attacked new arrival after learning of his faith, they say. 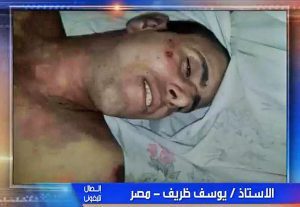 His father, Reda Helmy, told Al Karma TV by phone that his large, strong son had arrived at the camp at 2 p.m. and was dead by 8 p.m. In the same program, the deceased’s cousin, Youssef Zarif, said he received a message at 2 a.m. on July 20 from the Ministry of Interior to come and retrieve Helmy’s body.

When Zarif arrived, he asked to meet an officer and was initially rebuffed. Eventually he met with an officer who told him that Helmy had died of an epileptic seizure. Zarif refused to believe the army explanation, saying Helmy was a healthy, quiet person loved by all in his village of Christians and Muslims. The heavily Muslim country has population that is about 10 percent Christian.

He told Al Karma that the extensive bruising he found on the body did not look like those of an epileptic episode. He said Helmy had bruises on his head, shoulders, neck, back and genitalia, with the worst injuries occurring on his back.

The doctor who examined the body refused to bow to pressure from those who brought it and reported that the cause of death was not natural, Zarif said. A prosecutor accompanying the family firmly concurred and demanded an investigation, he said.

Zarif said he thanked the doctor and prosecutor for not trying to cover up the truth.

The three officers who attacked his cousin are in custody and under investigation, he said.

Zarif said he learned from police and other soldiers that the three officers began to harass Helmy because of his Christian faith, and that the marks on his body indicate they kicked him with their boots and hit him with heavy instruments.

Another cousin, Malak Youakim, confirmed the killing to Alhorreya.TV. Youakim also said Helmy was attacked for his Christian faith.

A Christian leader in Helmy’s home village said many there are in mourning.

“Many women are wearing black, a sign of mourning for the death of one of their Coptic youth,” he told Morning Star News. “Many are sharing the graphic pictures of the bruised body of Joseph Reda Helmy, a new draftee doing his military service.”

He said Helmy had been in the army for only month when he died on July 19.

Several other Coptic Christians have died for their faith while serving in the Egyptian military. On Feb. 17, 2016, the Egyptian military informed the family of Michael Gamel Mansour that the 22-year-old conscript from Assuit had committed suicide. Authorities claimed Mansour, who was assigned to a unit that guards El Gomhoreya Stadium in Cairo, shot himself with a rifle. They asserted that moments before his suicide, Mansour became despondent after a telephone conversation with members of his family.

Sources said they do not believe that Mansour killed himself. Family members have said the phone conversation the military cited was about innocuous issues. Mansour was not dealing with any major problems and gave no signs that he was having any sort of psychological episode, they said, and no suicide letter has been found.

Mansour had been scheduled to be discharged from army service on July 1, 2016, according to family members. His case marked the third time in nine months that the government reported a Coptic Christian soldier committing suicide. A fourth Christian was killed in August 2016, according to the government, in a shooting incident in which no one has been criminally charged.

On Nov. 20, 2015, the military informed Nataay Boushra that his son, Private First Class Bishoy Nataay Boushra, a second-year conscript soldier in the Egyptian army, was dead, also a victim of suicide. Boushra, 21, served in the Central Security Forces (CSF), a ubiquitous, 450,000-man unit under the command of the Ministry of Interior used to augment the Egyptian National Police. Boushra was posted to the outskirts of Cairo, guarding the CSF barracks used by his duty section.

According to the military, Boushra was found dead the morning of Nov. 20, 2015 in the bathroom of a military jail cell with a sheet wrapped around his neck. Officials told Nataay Boushra that his son hung himself from a windowsill.

Nataay Boushra rejects the government’s claim of suicide. His son was deeply spiritual and considered suicide to be a grave sin. During his army service, he was in regular contact with his family and gave no indication of any depression before his death. He was just three months away from being discharged from the army and pursuing his lifelong dream of becoming a monk.

As with the case of Mansour, the military made its ruling that the cause of Boushra’s death was a suicide before an autopsy was performed. At the morgue, the family refused to take the remains until officials conducted an autopsy, but while waiting, Nataay Boushra and his brother were able to examine the body. In addition to the ligature marks expected from a hanging or strangling death, Boushra’s torso was covered with bruises and huge welts from what appeared to be sustained, brutal beatings.

For months before his death, according to his father, Boushra endured threats, violence, intense verbal abuse and public humiliation from a fellow draftee, a Muslim known to the public only as “Mustafa.” Boushra took the abuse in stride until Nov. 4, when the Muslim soldier launched into yet another tirade against Christianity. Boushra picked up a stick the size of an ax handle and hit the other soldier in the head, knocking him to the ground, according to military court testimony.

The soldier was taken to a hospital for examination and then released. Both men were arrested and placed together in a jail cell awaiting a hearing in a military court.

For reasons still unknown, another soldier who was a friend of Mustafa was later locked in the military prison cell with Boushra and Mustafa, the same cell in which he was later found dead, according to the military.

Egypt is ranked 21st on Christian support organization Open Doors’ 2017 World Watch List of the countries where is it is most difficult to be a Christian.

Soldier Beaten to Death for His Christian Faith, Relatives Say 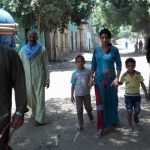 Copts in Kom El-Loufy still have no church in their village, and they’re not aloneNews & Reports 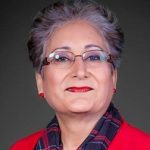