In the last few days, dozens of Coptic Christian families fled El Arish in north Sinai amid an ongoing campaign of murder and threats waged against them by the Islamic State (ISIS). According to reports, at least seven Coptic civilians were killed by ISIS operatives in the city in recent weeks, prompting Coptic families to flee to mainland Egypt. Some Egyptian sources claim that 85 of the 103 Coptic families in the city have fled; other sources place the figure at 45. Some of these families have taken refuge in the Anglican church in Ismailia, while others have fled to Suez, Minya or Sohag. The Al-Sharq Al-Awsat daily noted that this is the first mass-exodus of Christian families from their homes for reasons of terror.[1]

It should be mentioned that the targeting of Copts is only one manifestation of ISIS’s ongoing activity in El Arish and in north Sinai at large aimed at intimidating the local population and preventing the Egyptian authorities from regaining control of the region. This activity includes demonstrations of force in El Arish, raids on the security forces and attacks on security personnel or their homes, the abduction and murder of civilians for cooperating with the authorities, efforts to enforce shari’a law, and the vandalizing of property, among other actions.

One of the Copts who fled the city described the threats faced by his community: “Lately, murders of Christians increased significantly. People are being murdered every day, and I think it will [only] get worse. The terrorists openly declared they would attack the Christians. I can’t blame the police, because the security situation in Sinai is very bad and terrorism is on the rise.” El Arish Copts said they had received threatening phone calls demanding that they leave their homes, and that ISIS activists had handed out fliers in the city threatening the Christians.[2]

An eight-year-old girl from El Arish said: “I am very sad because I had to leave my friends and my school, and I don’t know if I will go back or not. I saw the threats with my own eyes, on notices and written on the walls of [my] house. I heard what they said to my father on the phone, when they said we had to leave or else they would kill us.” A woman recounted that there was a knock on her door one night, and when her son opened it terrorists burst in, shot him dead and then searched the house for the other men of the family. They found her elderly husband and shot him too, and then they stole her jewelry and set the house on fire.[3]

These events are the culmination of the ongoing terror campaign that has been waged against Sainai’s Christians for years by ISIS and by its earlier incarnation, Ansar Beit Al-Maqdis. This campaign has included the murder of civilians, including priests, as well as abductions, ongoing threats and the targeting of businesses. The campaign became systematic in 2013, when the jihadis in Sinai launched an all-out war against the Egyptian authorities.

This report reviews ISIS’s threats and actions against Christians in Egypt, the reaction of the Egyptian authorities to the crisis, and responses by the Christian religious establishment.

ISIS Incitement: Calls To Kill Public Figures, Increase Attacks On Christians
Last week ISIS released a video inciting against the Christians in Egypt, in which it permitted their killing and vowed to increase its attacks on them. The video claimed that the Christians are not entitled to the status of protected non-Muslims (ahl al-dhimma) because they violated the conditions for protection: they took advantage of their status to harm the Muslims in general and the Sinai mujahideen in particular. ISIS spokesmen in the video promised that the organization would stage further attacks on Christians, similar to the deadly church bombing in Cairo in December 2016. The video included excerpts from the last statement of the suicide bomber who perpetrated that attack, in which he addressed ISIS members imprisoned in Egypt, saying: “I swear that we will liberate Cairo very soon and come to release you from your shackles. We will come with car bombs, so take heart, servants of Allah.”[4]

The release of the video was accompanied by many threats by ISIS supporters on social media, threats which have been on the rise since the Cairo church bombing.[5] For example, ISIS supporters on the Wilayat Misr Telegram channel circulated photos of Coptic public figures and Muslim figures who had expressed solidarity with the Copts, threatening to kill them. The photos were posted along with the text: “[Here is] an evil [seed] within the body of the ummah. We urge you, o lions of the [Islamic State’s] security units in mainland Egypt, to eliminate them using your silencer-equipped guns, your explosive charges and your knives.” Among the Copts threatened were former minister of industry, trade and investment Mounir Fakhry ‘Abd Al-Nour and social activist Malik ‘Adli; two Muslims who were threatened were prominent human rights attorney Negad El-Borai and Ahmad Khairi, a member of the liberal Free Egyptians party.[6]

Another message on the Wilayat Misr channel urged lone attackers to target Christians everywhere: “O you who seek martyrdom and [Allah’s] good reward, o you who seeker Paradise and its Black-Eyed Virgins, jihad has come to you. Allah has chosen you for this mission, of all [the men] He created. The Crusaders in Egypt [i.e., Egypt’s Christians] have violated all the agreements and contracts [of protection] and declared war on Islam and the Muslims. More than that, they offended our Prophet on their television channels. None of the so-called Islamic organizations in Egypt deterred them. Hence, the soldiers of the Caliphate stood up, put their faith in Allah and carried out a martyrdom operation in a large [Christian] house of worship that was guarded by soldiers and weapons. Allah allowed the brother [i.e., the bomber] to come among them and detonate his suicide belt, killing and wounding 80 of them. O supporters of the Islamic State! Increase your ambitions and prepare [calamities] for the Crusaders that will make their lives bitter. By Allah, it would be a disgrace for us to avoid targeting those who insulted our Prophet in our [own] country. Lie in wait for them and avenge our Prophet. Do not let them live safely in their homes and their places of work. You brothers in Sinai have already caused the Crusaders to hide like women, and some of them have even fled and left Sinai. Blood for blood, destruction for destruction. That is [the relationship] between you and us, o servants of the Cross. What will come will be graver and more bitter, so watch your backs.”[7]

A message posted on another pro-ISIS Telegram channel, Misr Al-Kinana, said: “There is a great wave of Crusader immigration from Sinai following threats by the soldiers of the Caliphate. By Allah the One and Only, the [Islamic] faith will not triumph except by means of the sword and the hangman’s [noose] and by fighting the enemies of Allah. It will not triumph through demonstrations or through the despicable laws that [the enemies of Allah] obey. You are the jewel in the crown, o soldiers of the Caliphate in Sinai, a thorn in the side of the infidels. We beseech Allah to grant you victory and accept your martyrdom.”[8]

Another post on that channel taunted Egypt’s Christians: “Where will you turn, o servants of the Cross? Allah willing, we will expel you from all of Egypt and drive you out, humiliated. You will pay the jizya [poll tax levied on ahl al-dhimma] whether you like it or not, and the government will be in the hands of the Muslims, Allah willing.”[9]

Egyptian Authorities: We Have Taken Measures To Protect North Sinai Residents
The Egyptian authorities released a number of statements in response to the events in Sinai. A communique issued by the President’s Office said that Al-Sisi had met with the Prime Minister, Defense Minister and other ministers to “discuss the developments involving terrorist organizations targeting innocent civilians in north Sinai.” He “noted the importance of opposing all attempts to undermine stability and security in Egypt and of preempting the plots of these organizations to intimidate the secure people of the homeland or threaten their property.” President Al-Sisi also instructed the government to take every measure to help the Christian civilians in the places where they are sheltering.[11]

Government spokesman Ashraf Sultan said that Prime Minister Sherif Ismail and the Ismailia governor Yassin Taher were looking into the matter of the Copts who had fled from north Sinai; furthermore, Ismail had instructed to form a government situation room to oversee the provision of services to the families, in coordination with the relevant district governors. The spokesman clarified that it was not yet clear when the families would be able to return to their homes, because this depended on the security situation in north Sinai, but added that the situation room would provide them with all the services and aid they required. It was reported that the Prime Minister had called Pope Tawadros to express his sympathies and inform him of the government’s measures to assist the families who had fled.[13]

The minster of family and social solidarity, Ghada Wali, visited the refugee families and said she was sure they would “return to El Arish very soon.” She added that the authorities are seeing to their immediate needs and that those who had suffered material losses would be compensated.[14]

Egyptian Copts: We Demand State Intervention
Coptic officials refrained from criticizing the government or its response to the crisis in media interviews, but other Coptic figures and elements did voice dissatisfaction over what they described as helplessness on the part of the authorities. A statement by the Coptic Church said: “The Church condemns the ongoing acts of terror in north Sinai against the Christian people of Egypt, [terror] that deliberately undermines our national unity and attempts to rupture our solid joint position opposing the criminal terrorism that originates outside Egypt… We believe that the [victims’] blood is precious to God and will cry out to Him in demand of justice. [God] will observe and pass judgement.”[15]

The head of the Coptic Orthodox Church in north Sinai, Gibril Ibrahim, stressed that the Copts demand to reinforce the El Arish police with increased army presence, adding that what is happening in the region is nothing less than a war, with all this entails. He expressed confidence that joint action by the police and the military can restore security to the region.[16]

Former Egyptian industry, trade and investment minister Mounir Fakhry ‘Abd Al-Nour tweeted: “Where is the government, parliament, police, army and media? Where is the state while Sinai Copts are being slaughtered and their homes are being burned down?”[17]

R. Green is a research fellow at MEMRI. 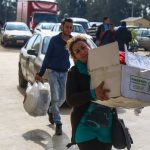 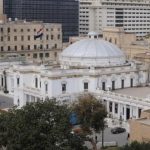