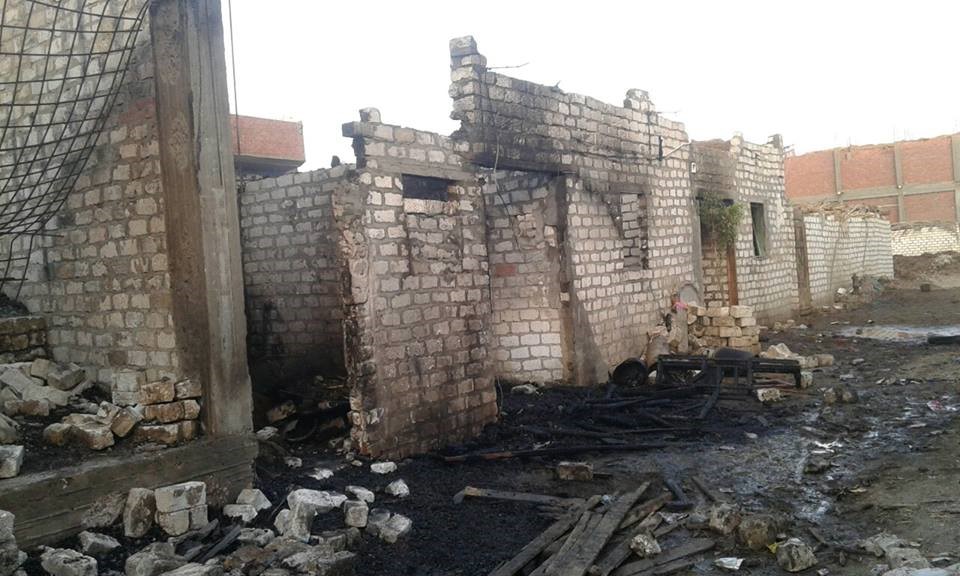 Photo: In the Minya village of Koum al-Loufi, Islamists flagrantly incite against the right of Copts to build a church – Watani

For Copts, the Law for Building and Restoring Churches they had so long aspired for was passed last August. So now they finally have in hand a law to ensure their constitutional right to freely practise their religious rites. But is this the end of the road? All on-the-ground indicators cast doubts over that. If the matter were left to Muslim fanatics, Christians would never be allowed to build any place for worship. And the fanatics stop at nothing to gain that end; they use fundamental Islamic teaching as a means to justify the terrorism they inflict on Copts, and on local communities at large, to make sure they impose their will.
A case in point is the village of Koum al-Loufi in Samalout, Minya some 250km south of Cairo.

Attack on rumour of church
Koum al-Loufi has been the scene of sectarian violence since last June when the Copt Ashraf Khalaf and his brother started building houses on a parcel of land which they own. Soon, a rumour circulated that one of these houses would be turned into a church. Sensing the imminent danger, the security apparatuses called the owner of the house and made him sign a declaration acknowledging that the building is intended only for residential purposes. However, fanatics rallied the Muslim villagers and went out in force to attack the Copts; they set fire to four houses belonging to the Khalaf brothers. The families living in these houses were forcefully evicted from the village; they later returned after the security authorities and members of Parliament interfered. Security authorities pledged to protect the Copts from any future attacks and to open a building belonging to a villager named Saad Abu-Kamel to be used by the village Copts for worship. That building had been closed five years earlier by the security authorities on account of its being unlicensed for use as a church.

Anba Pavnotius, Bishop of Samalout, demanded that the State compensates the villagers for the damages incurred and that the law should be applied to achieve justice. He supported the Copts in their refusal to succumb to any ‘conciliation’, as has been the norm in most sectarian incidents. Informal conciliation sessions are traditionally used to resolve disputes in rural areas in Egypt, and are notorious for enforcing harsh, unjust conditions on the Copts when they are party to any dispute. By means of menacing threats or intolerable pressure, the Copts are forced into acquiescing to the terms of ‘conciliation’ no matter how unjust. The process entails that they also relinquish all their legal rights.

New law
Anba Pavnotius demanded that the State should approve the building of a church in Koum al-Loufi, or open the closed Saad Abu-Kamel building for the Coptic villagers to worship. The closest church where the Copts can go is located in Rafla village more than 7km away, a distance which for villagers with poor transport means may be difficult to travel.

Since last August when the new law for church building was passed, the security authorities have been trying to persuade the Muslim villagers to consent to the opening of the Saad Abu-Kamel building for the Copts to pray. The new law allows for legalising existing unlicensed churches. Although more than four meetings were held at the security directorate, the extremists have been adamant that a church cannot be built in a ‘Muslim village’ where Christians constitute a minority.

Several times negotiations have resumed and failed; the last of these took place at the office of the new Minya governor Essameddin al-Bedeiwi with representatives of both the village’s Muslim and Christian communities. The meeting ended on a sour note as the Muslims insisted on forbidding any form of Christian worship to be held in the village. The Copts’ requests were modest: to hold Kiahk praises [evening services of praise held throughout the Coptic month of Kiahk which ends with Coptic Christmas on 29 Kiahk, 7 January] and New Year services, as well as Christmas Midnight Mass in the closed building because of the difficulty they have to endure to go to the closest church in the chilly winter evenings. Besides, the Copts said, the church in Rafla village is barely wide enough for its own congregation. All efforts exerted by the governor, security authorities and Samalout Bishopric to open the building fell on deaf ears of the Muslim fanatics.

“Christians pray? Never!”
The Muslim fanatics, apparently fearing the authorities would force the ‘church’ open despite their rejection, embarked on carrying out a plan to incite the villagers against any attempt to open the closed Abu-Kamel building. They printed and circulated flyers all over the village asking Muslims to take to the streets after Friday noon prayers on 25 November to protest against the Copts. “The Copts want to hold prayers in Saad Abu-Kamel’s building which the security apparatus had closed before but now plans to re-open,” the flyer read. “Opening a church in the Land of Islam is out of the question. Dear fellow villagers, God is by our side but we have to unite, young and old, men and women, against the Christians who want to build their church against our will.” The flyer went on to claim the Copts have decided to pray in Abu-Kamel’s house and said that the village Muslims must hold protests after Friday noon prayers, specifying a list of mosques that would be used as meeting points for the protestors. “You want to pray? Never! Never! You build a church? Out of the question!” the flyer concluded, this time addressing the Christian villagers.

This flyer was not the first to be circulated in the village; some of Koum al-Loufi fanatic youth organised a campaign on social networks against the call of Anba Pavnotius to enforce the law and open the closed building for worship. In flyers they circulated, the Koum al-Loufi youth explained the reasons behind their adamant objection to the building of a church in their village which they call ‘the Land of Islam’ and in which they consider the church to be ‘a house of blasphemy’.

Islamic backing
On social media and through flyers, the village’s young Muslims cited the Islamic backing to their rejection of a church in their midst.

“Regarding the village of Koum al-Loufi where the villagers oppose the building of a new church… These villagers are devoted believers and followers of the Qur’an, we pray that Allah supports their cause and makes them victorious, for he is the best protector and helper. The opinion of religious teaching and Islamic law on the issue of building new churches is clear in the hadith (quote or sayings) of Prophet Muhammad, peace be upon him, narrated by his wife Aisha, may Allah be pleased with her: “Two religions shall not coexist in the Land of Arabs” as transmitted by Imam Ahmed Ibn Hanbal in his book al-Musannad and corrected by many scholars. Based on this, scholars have agreed on banning the construction of all temples of infidels such as churches, monasteries, synagogues and fire temples in the Land of Islam. In addition, it is stipulated that no two tribes must live in the same land and that all rites of blasphemy are forbidden. The building of modern churches is considered among the greatest sins as confirmed by the writings of Islamic scholars.”

The youth also cited ‘Omar’s assurance’ [an assurance of safety given by the Caliph Omar Ibn al-Khattab to the people of Jerusalem in the 7th century; several versions of the document exist with questionable veracity] which says: “We have stipulated that no church, monastery, hermitage or cell would be built.”

Fatwas: no church in Land of Islam
Several fatwas (Islamic legal opinion or ruling)issued by scholars belonging to different schools of Islamic Jurisprudence throughout Islamic history were listed in the Koum al-Loufi flyers and posts. In the writings of Abdallah Ibn-Abbas, Prophet Muhammad’s cousin and one of the early 7th century scholars of Islam: “Non-Muslims are not allowed to build temples, churches, synagogues, cells or fire temples, and no bell is allowed to be rung in them.”

Flyers cited the fatwa of 7th century scholar Imam Hassan al-Basry that it is part of Sunnah—the verbally transmitted record of the teachings, deeds and sayings, silent permissions or disapprovals of Prophet Muhammad—to destroy all churches, old and new, in the Land of Islam. The fatwas of Muhammad Ibn al-Hassan, Imam Malik and Imam al-Shafei, 8th century scholars, declared that all churches must be destroyed and that no new place of non-Islamic worship may be built in the Land of Islam. Ahmed Ibn Hanbal, a prominent 9th century scholar and theologian, also stipulated that Jews and Christians were not to build churches or synagogues and that no church bell would be heard. In the 10th century, the scholar and theologian Imam Abul Hassan al-Ashaary said, “Decreeing / willing an act of blasphemy is considered blasphemy and building a church, where the existence of Allah is denied and another God is worshiped, in the Land of Islam is an act of blasphemy.”

Sheikhul-Islam Ibn Taymiyyah, the prominent 13th / 14th century scholar and theologian who has considerable influence on contemporary Wahhabism, Salafism, and Jihadism, confirmed that Dhimmis [non-Muslims living in the land of Islam] are not allowed to build any churches, temples, monasteries or cells in any place where Muslims live and mosques exist, and they are not to practise any of their ‘blasphemous rites’ in the Land of Islam.

What does the future hold?
The fact that any fatwa issued by Islamic scholars cannot be amended or cancelled unless another fatwa is issued by another scholar who is member of a recognised Islamic institution, and since this never took place in case of the fatwas to ban churches, Koum al-Loufi Copts have sufficient reason for anxiety. When they got wind of the recent flyer, they feared the renewal of violence against them and notified the authorities. “We are waiting for the implementation of the law. This will allow us to worship in our own village and spare us the burden of travelling to another village to pray. The Muslims of the nearby village where we go to pray have also been hostile to us and told us on several occasions that we are not welcome in their village,” a Copt from Koum al-Loufi told Watani.

Governor Bedeiwi had given the Muslims of Koum al-Loufi a deadline to abide by the law and accept of their own accord the fact that the closed building will be opened for the Copts to hold church services, which is why extremists called for the protest on Friday 25 November. But, fearing that violence might erupt anew, security was tightened in the village, especially in front of the mosques which had been designated as starting points for the protest, and also in the vicinity of the houses of the Coptic villagers. As a result, the calls for protests were suppressed and the day passed peacefully. Peace reigns in the village but the fanatics still insist that no form of Christian worship might be held there, and the Copts sill fear some new unexpected attack by the Muslims. As to reopening the closed ‘church’, it remains to be seen how this will transpire.
_______________________

“Build a church? Out of question!”