This is an incredible report. The Egyptian Parliament says to the British Parliament that their report on Islam is totally wrong. They even say that they have not read any books on political Islam, which is a cancer for democracy. This Egyptian report reads like I wrote it.

File Photo: Members of the Egyptian parliament attend the opening session at the main headquarters of Parliament in Cairo, Egypt, January 10, 2016. (Reuters)

A 10-page report issued by the Egyptian parliament’s foreign affairs committee on Sunday launched a scathing attack on EU and UK politicians and MPs who defend “political Islam.”

The report, issued in response to a UK House of Commons’ foreign affairs committee’s report on the Muslim Brotherhood and political Islam on 7 November, said it does not aim to defend the Egyptian government’s security and legal measures against the Brotherhood group and its affiliated militant and terrorist organizations.

“Our report reflects our responsibility as elected MPs to stand against a group which seized its one year in power to turn Egypt into a religious state and show the world the true meaning of “political Islam,” said the report.

It added that the “Muslim Brotherhood tried to steal history and turn the Arab world’s first civilian state into a theocratic state that is hostile to human civilization and the values of freedom, equality and citizenship.”

The report said “if Europe and the West are really keen to stem the tide of religious terrorism and the political hijacking of Islam, they should correct their understanding of all political Islam movements which claim they have a licence from God to implement his laws on earth and impose the state of the caliphate on the world .”

“Our committee’s report aims to expose these lies. We intend to send it to the Egyptian ambassadors in England and Germany to stand against the attempts of several politicians and MPs in these two countries to polish the image of political Islam ,” the report said.

Said said “we know from history that Europe was able to move ahead and achieve progress only after it made a separation between religion and politics.”

“So we are surprised by the new generation of European radical liberals and progressives who defend political Islam and thereby give cover for Islamist movements which claim victimhood to spread across Europe and create a fertile ground for Islamist radicals there,” said Said.

“We wonder how a parliament that was based on separating religion from politics approves that a country like Egypt be governed by a theocratic state,” said the report, adding that “this is a setback from all the democratic and liberal ideals which formed the foundation of European civilization.”

“All studies that have been conducted on political Islam movements show that there are no essential differences among them and that they all seek one objective – that is trying to impose a strict code of Islam and Islamic Sharia law on the world, and to launch an armed Jihad against ‘infidel rulers’ everywhere,” argued the report.

“In other words,” the report added, “these groups want to Islamise the entire world and they only differ on when and how these objectives should be implemented,” said the report.

“While a group like the Muslim Brotherhood shows the face of artificial Islamic moderation to gain ground in the West and infiltrate societies there, other groups seek the road of violence. Each complements the other,” said the report.

The report described the Muslim Brotherhood “as the mother of all jihadist and Salafist movements.”

“The UK parliament report ignores – either on purpose or due to a lack of knowledge about historical facts – that since it was established in the first third of the previous century the Muslim Brotherhood has been responsible for spreading the radical Islamic ideology upon which all terrorist organizations such as Al-Qaida, ISIS, Hamas, Ezzeddin Al-Qassam, Al-Nusra Front and Ansar Beit Al-Maqdis were based,” said the report, adding that “most of the leaders of these terrorist organizations such as Al-Qaida’s current leader Ayman Al-Zawahri were once members of Muslim Brotherhood.”

“This group is the godfather of all jihadist and Salafist ideologies which dream of resurrecting the state of the caliphate against the infidel West,” said the report.

“We doubt that UK politicians or MPs have any books about the ideological basis of this group, which is highly hostile to the West and what they describe as its “liberal and infidel culture,” said the report.

To press its case, the report reviews a number of political assassinations which the Muslim Brotherhood has carried out since it was established by its leader Hassan Al-Banna in 1928.

The second part of the response accuses the UK report of making “a big mistake” by drawing a comparison between the experience of Muslim Brotherhood in Egypt and Tunisia.

“The Media and politicians in the West always like to portray Tunisia as the democratic, inclusive model in the Middle East,” said the report, adding that “this is a big mistake because facts show that Tunisia has become a fertile ground for Islamist jihadists who spread extremism and terrorism in France and Europe and that more than 1,000 Tunisians — the greatest number from any Arab country — a have joined the IS group.”

“Doesn’t this show that the Muslim Brotherhood ideology was behind the transformation of Tunisia into a breeding ground for jihadists,” wondered the report, adding that “not to mention that Tunisia is a small country – with 11 million people – but Egypt is a country with 90 million and the birthplace of the Muslim Brotherhood, which exploited political tolerance over eight decades to create a wide network of businesses and secret armed militias.”

“The Muslim Brotherhood in Egypt owns banks, charity organizations and receives huge donations from wealthy sympathizers in the Arabian Gulf and throughout the Islamic world,” said the report.

The report’s third section is devoted to explaining the Muslim Brotherhood’s ideology and internal structure “which is highly hostile to all democratic values.”

“Their ideology is based on strict obedience to the group’s supreme guide, not to mention that its main ideologues, such as Sayyid Qutb, were the ones who invented the jihadist ideology which states that “democracy goes against the rule of God and Islamic Sharia,” said the report.

The report also reviews in detail “the one year of the Muslim Brotherhood in power in Egypt.”

“They exploited the collapse of (former president) Hosni Mubarak’s ruling party to exclude all civilian political forces from power and impose their rule on the country. When millions revolted against them and expelled them from power on 30 June, 2013, they resorted to claims of victimhood again, only to find an ear in the UK and its parliament,” said the report, insisting that “Egyptians stand firm against the rule of ‘the supreme guide’ and will not allow their country to become a religious state.”

“Egyptians are in a battle of life and death against this group, which is the mother of all radical Islam movements,” said the report.

The report also said that many of those who implemented terrorist attacks against the US on 11 September, 2001 received training at the hands of old and veteran Muslim Brotherhood leaders.

The report spotlights what it calls the Muslim Brotherhood’s “empowerment ideology” which seeks to Islamise the entire world in a gradual way.

The report urges the UK parliament and politicians to review “the dark history of the Muslim Brotherhood” and to verify their information about it “instead of issuing distorted reports about political Islam.”

“While the world has become increasingly aware of the dangers of all radical Islam movements, we are surprised that the UK MPs and politicians still live in a coma, insistent not only on polishing the image of these movements, but also propagating the biggest lie: that it is a peaceful and moderate movement,” the report concludes.

The report includes a great number of details about the yearlong rule of former president Mohamed Morsi and how the Brotherhood exploited this year to isolate all political forces.

“For all those who believe in the West that Islamist movements can be integrated into the political process of Arab countries, we offer this bitter experience to put an end to this lie,” said the report.

The UK House of Commons’ foreign affairs committee released its report on 7 November, commenting on the findings and conclusions of a December 2015 review by the UK Foreign and Commonwealth Office (FCO) on the Muslim Brotherhood.

The 2015 FCO report concluded that the group has long maintained a dubious position vis-à-vis the use of violence and terrorism to achieve political change.

The UK parliament committee said that the FCO review “undermined confidence in the impartiality of the FCO’s work” due to the “misguided appointment” of Sir John Jenkins, the UK ambassador to Saudi Arabia, to head the review effort. 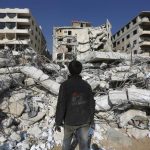 Fight or Flight – America’s Choice in the Middle EastSelected Opinion