By Prince Hassan of Jordan and Ed Kessler – The Telegraph –

Christianity has been part of the essential fabric of the Middle East for 2,000 years. Far from being a western import as some, incredibly, now seem to suggest, it was born here and exported as a gift to the rest of the world.

Christian communities have been intrinsic to the development of Arab culture and civilisation. This central role in our region and civilisation is why it is abhorrent to us, as a Muslim and a Jew, to see Christianity and Christians under such savage assault across our region. We are appalled not only by the sickening attacks on our fellow human beings, but we also know that to lose Christianity from its birthplace would be to destroy the richness of the tapestry of the Middle East and a hammer blow to our shared heritage. The reality is, we are all one community, united by shared beliefs and history.

But this is increasingly denied, with Daesh (the self-proclaimed Islamic State of Iraq and the Levant) taking the lead both, in justifying and carrying out these attacks. The most recent issue of its publication Dabiq, headlined ‘Break the Cross’, explicitly rejects the fundamental belief that we are all People of the Book.

Daesh peddles an apocalyptic vision that harks back to a mythic Golden Age, which is solely the creation of the warped minds of today’s jihadists. They are in the same mould as those whose misguided zeal turned Christian Europe in the Middle Ages into a byword for fanaticism and oppression. Daesh wants to take us to a new Dark Age, an age made even darker by the damage that the gifts of science and technology pose in their hands. It is not just Christians, of course, who they have made targets for their hate.

The search for religious purity poses a universal threat. As we have seen all too often, fundamentalists display a particular loathing for co-religionists whose views do not conform to fit their own. Daesh has shown itself as prepared to slaughter indiscriminately other Muslims as it has Jews, Christians and others, whatever their nationality — whether Jordanian or Egyptians, Americans, British or European. Helping to end this dangerous slide towards hatred, self-destruction and fratricidal conflict is the main challenge for all of us involved in interfaith dialogue. This requires us to step up our efforts to increase the understanding that what unites the three great faiths of our region is far greater than the differences.

We must stress, too, that respect for the past and learning from it does not require us to live there, but this must be coupled with an honest recognition that all the Abrahamic scriptures — the Christian Bible, the Jewish Tanach and the Quran — contain texts that are divisive and contain attacks on other groups. Throughout history, they have been used to justify the most appalling actions in the name of God. These texts, which carry weight and authority, cannot be deleted or ignored.

So how do we counter their divisive message which, in the wrong hands, can be read as a licence for bigotry and violence?

It is essential to ensure these words are seen in context. It is vital to juxtapose texts from the same scripture that offer a contrasting approach.

Here, too, a better understanding of the sacred writings of other faiths may help us to see the paradoxes and conflicts that we can fail to acknowledge in our own.

Above all, we must emphasise the importance of interpretation, which is central and common to all the Abrahamic faiths. They provide us with the ability to deal with texts that run contrary to what we regard as the fundamental values of our tradition. Islam teaches haq al hurriya and haq al karama, meaning, the right to freedom and the right to human dignity. In Judaism, Pikuach Nefesh is the command that the preservation of human life takes precedence over all other commandments.

It is time to call a halt to the hate and atrocities that are causing convulsions throughout our immediate region and beyond. Peace and humanity itself hang upon the success of this interfaith exercise. It is that important.


CONTACT US
Coptic Solidarity | © 2015
Download Advocacy Kit
How Do Trump’s Conspiracy Theories Go Over in the Middle East? Dangerously.Selected Opinion 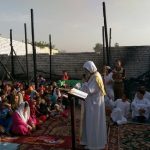 Do Christians in Egypt Need a Law to Build Churches?Selected Opinion