By Lisa Daftari- The Foreign Desk –

Pressure is mounting on the Obama administration to take action following a unanimous Congressional vote Monday approving a resolution to designate the persecution of Christians and other minorities in the Mid East by the Islamic State as “genocide.”

The resolution, which passed in the House in a 383-0 vote, comes ahead of a March 17 deadline requiring Secretary of State John Kerry to announce a final decision.

The designation would legally categorize the targeting, torture, uprooting and slaughtering of Christians, Yazidis and Kurds as “genocide, war crimes and crimes against humanity.”

For the executive branch to officially take a position on such a determination, however, entails a more detailed legal review, requiring Sec. Kerry and his legal advisors to determine whether the treatment of Christians and others meets the definition of “genocide,” which according to the United Nations Convention is “acts committed with intent to destroy, in whole or in part, a national, ethnic, racial or religious group.”

Officials have hinted that assessment is still under way, making it likely Sec. Kerry will not make the March 17 deadline.

“I have asked for further evaluation based on what I’ve heard in order to test against the law some of my own perceptions and evaluations and see where we come out.”

Sec. Kerry rejected the notion that his legal team was hesitant to make the designation but said that he was not satisfied with their initial report.

The move by the House, similar to the measure in the Senate that has not been voted on yet, was designed to expedite a move by the administration which has dragged its feet on taking a position.

This would be only the second time in U.S. history that the administration has made such a designation in the midst of ongoing conflict; the first was in 2004, during Sudan’s Darfur crisis.

“I am thrilled to see that the House, like the European Parliament before has rendered historic justice at last to these defenseless communities,” Dr Walid Phares, who has been a pivotal advisor to a long list of Middle East NGOs representing minorities and has led delegations to the U.N., E.U. and Congress for over 25 years, said to The Foreign Desk.

Dr. Phares, who has been pushing for the protection of Christians and other minorities in the region since ISIS began its horrific march, penned the specific language and terminology adopted by the resolution back in August 2014—namely the three concepts of “genocide, war crimes and crimes against humanity.”

“If the U.S. and Europe have finally acknowledged that genocide has taken place, the next step is to create protected zones for Christians and Yazidis in Iraq and Syria,” Dr. Phares said. 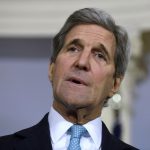