Yet another Coptic Christian church has been set aflame; and yet more Christians have been killed in Egypt.

On Sunday, August 14, 2022, the Church of Abu Seifein—named after Saint Mercurius of Caesarea, revered by the Copts—caught fire as it was packed with over two hundred worshippers celebrating morning mass.  At least 41 Christians—18 of whom were children—were either burned alive, killed by asphyxiation, or during the subsequent stampede.  Along with the officiating priest, 5-year-old triplets, their mother, grandmother, and an aunt were among those killed.

What caused this church fire?

Considering that radical Muslims have torched or bombed hundreds of Coptic churches over the decades in Egypt—and often when churches are packed—it is, of course, difficult to resist that explanation.

There are other telling factors: the city of Imbaba, the site of this latest church burning, has witnessed the burning of other Coptic churches at the hands of Muslims.  Most significantly, in 2011, some 3,000 Muslim rioters set three Imbaba churches aflame to jihadist cries of “Allahu Akbar.” Twelve Christians were killed in those riots.

Moreover, the date of this church burning, August 14, is essentially the anniversary of when Muslim Brotherhood members and sympathizers attacked and torched 62 Coptic churches on August 15 and 16, in 2013, after then president Muhammad Morsi was ousted.  One may argue that August 14 is not August 15 or 16, but August 14 is the closest date to those dates that also, because it fell on a Sunday, would have had the most Christians in the church, making it the ideal day to “commemorate” the Brotherhood-led events of 2013.

At any rate, the “official” story is that the recent fire was caused by “faulty electric wiring.”  As many observers have noted, however, this explanation is suspect if for no other reason than that it was offered up literally minutes after the fire broke out; and, as is well known, it takes a serious, prolonged investigation before such a determination can be made—not minutes.

Be that as it may; even if faulty electric wiring is the true culprit of last Sunday’s fire, the government of Egypt is still largely to blame.  Since Ottoman times—indeed, since the Arab-Islamic conquest—severe restrictions, based on sharia stipulations, have made it next to impossible for Christians not only to build but to repair churches.  Although a 2016 law was heralded as repealing these draconian stipulations, practically speaking, and as many Copts have noted, little has changed.  Till this day, most Coptic churches in Egypt are shoddily built, cramped, and poorly wired.

As even the New York Times reported: “The Copts have long complained about being the victims of discrimination on the basis of their religion. One aspect of that discrimination are government restrictions on the construction, renovation and repair of churches in the largely Muslim country. These restrictions have left many of the buildings in disrepair and made them fire hazards.”

The recently torched Church of Abu Seifein, for example, was not a true church but rather “a four-story residential building in a narrow alley in the Imbaba neighborhood” where two apartments on the top floors were gradually transformed into a church. Little wonder that its Christian worshippers were unable to “escape through narrow doors, ill-equipped to facilitate emergency exit to the alleyways of the Giza neighborhood outside.”

Furthermore, as this report states, “Eyewitnesses said firetrucks and ambulances arrived to the site over one hour after signaling the fire, even though they’re stationed in [a] nearby street,” thus leading to more lost lives that might have been saved.

Indeed, as if to underscore Egypt’s disregard for the basic rights of its Coptic citizens and their places of worship, less than three days after the burning of the Church of Abu Seifein on August 14, yet another Coptic church, Anba Bishoy in Minya, was just set aflame, on August 17, 2022. And, as if to preempt the automatic reason given by state authorities to media for dissemination—“faulty wiring”—Bishop Fam of Minya was quick to say that “There was no working electricity inside the church of Anba Bishoy at the time of the fire; air conditioners were turned off.” Not ones to have their creative imagination forestalled, investigating authorities offered—a mere day later—an even more absurd cause: “church candles in the hands of children were the cause.”

In a recent program dedicated to discussing the recent tragedy at the Church of Abu Seifen, the prolific Egyptian writer and researcher, Magdi Khalil, made some important observations.  Of the 3,000 or so churches in Egypt, hundreds, he said, have been torched over the past 50 years.  Meanwhile, and although there are at least half a million mosques and prayer halls in Egypt, none have ever burned.

These numbers further highlight the extreme discrimination against churches in Egypt: considering that Christians amount for, at the very least, ten percent of Egypt’s total population, they should have at least 50,000 (ten percent of half a million)—not just 3,000—churches.  Little wonder they are always cramped with hundreds of Christians, making them fire hazards.

Khalil also said that over the past 50 years, three—and only three—reasons have ever accounted for the large number of burned churches in Egypt: 1) radical Muslims (mobs or terrorists); 2) “natural causes” (faulty wires, etc.) most of which are byproducts of the aforementioned draconian restrictions on churches; 3) Egypt’s own state security agencies, which for their own reasons burn churches.

In closing, another Coptic church has burned in Egypt, and more Christians have been killed.  And whichever way one looks at it—whether because Muslims who are “radicalized” in government funded mosques are responsible, whether the ever-scheming State Security is responsible, or whether faulty wiring is responsible—in the end, Egyptian leadership and governance is responsible.

Photo: Brothers Kirollos Youssef Samir and Bishoy Youssef Samir were among the victims of the fire at Abu Seifein Church. The blaze at the church in Giza, which also housed a day-care center, is being blamed on an electrical problem. (Sima Diab for The Washington Post) 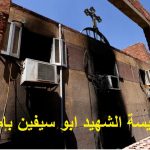 More than 40 dead in a fire at a Coptic church in CairoCS Releases & Articles, Uncategorized 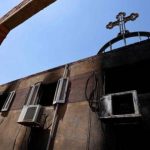