At least 41 people were killed in a fire that broke out today during Sunday prayers in a Cairo church, according to Coptic church spokesperson, while the Egyptian Ministry of Health said it had so far identified 55 victims. Some wounded victims are said to be in critical condition.

This fire, the origin of which remains to be determined, occurred at the Abu Sifine church in the popular district of Imbaba, named after Saint Mercury of Caesarea, revered by the Copts.

President Abdel Fattah al-Sissi immediately reacted on his Facebook page, thus indicating the gravity of the situation.. “I have mobilized all state services to ensure that all measures are taken,” he said.

Hegomenus (chief-priest) Abdel Messih Bakhit was among the victims, that included numerous children. Whole families as well: 5-year-old triplets, their mother, grandmother, and an aunt were among those killed.

Eyewitnesses said firetrucks and ambulances arrived to the site over one hour after signalling the fire, even though they’re stationed in nearby street..

The date of the incident leaves a lot of question marks, as it took place on an August 14, almost the same day Islamists (mostly Brotherhood) attacked dozens of churches, schools and Christian homes on Aug. 15 and 16, 2013, in reprisal acts after the then president, Mohamed Morsi, was overthrown.

Although representing between 10 to 15 percent of Egypt’s population, the Copts are kept out of many positions. For example, Egypt’s cabinet includes no Coptic ministers under Al-Sisi, even though there were always two or three under previous rulers. Copts deplore very restrictive legislation for the construction of churches compared to none for mosques. The subject is sensitive and Coptic human rights activist Patrick Zaki recently spent 22 months in detention for “spreading false information” over an article exposing violations of Christian rights in Egypt. 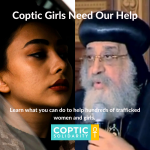 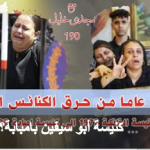