At least 41 people were killed and at least 12 were injured on Sunday after a fire broke out at a church in the Egyptian city of Giza as worshipers gathered for Sunday prayers, according to the country’s Health Ministry.

Egypt’s Interior Ministry said in a statement that the blaze at Giza’s Abu Sefein Church — one of the largest in the city — was “caused by a faulty air-conditioning unit” on the second floor of the building, which also housed classrooms. Father Mikhael Guirguis, the deputy head of the Northern Giza archdiocese, told a church-affiliated TV station that he saw children among the dead.

The majority of the deaths and injuries were the result of smoke inhalation and a stampede as people tried to flee the burning building, said the Health Ministry said. Egypt’s Interior Ministry said on Sunday that the blaze was under control.

President Abdel Fattah el-Sisi spoke by phone on Sunday with Pope Tawadros II, the head of Egypt’s Coptic Church, and offered his condolences, according to a statement from the president’s office.

“I am closely following the developments of the tragic accident,” Mr. Sisi said in a statement on Twitter. “I directed all concerned state agencies and institutions to take all necessary measures, and immediately to deal with this accident and its effects.”

The country’s chief prosecutor, Hamada el-Sawy, said he had ordered an investigation into the blaze, one of the country’s deadliest in recent years. In March 2021, a fire at a garment factory near Cairo killed at least 20 people.

Photo: Security at the scene of a deadly fire at the Abu Sefein Church on Sunday in Giza, Egypt.Credit…Mohamed Abd El Ghany/Reuters 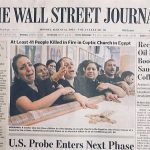