Islamism and nationalism in Turkey combine in an even more ambitious form.

Where does “the East” begin? The question is as much political as historical. For some the divide is that Europe is the West and Asia is the East. But borders and people move.  British adventurer Sir Samuel Baker rescued the teenage girl who was to become his wife from a Turkish slave market in 1859. That was at Vidin, on the southern banks of the Danube in what is today northern Bulgaria.  The papal agency known as the Catholic Near East Welfare Association (CNEWA) was established with that name in 1924 to initially help persecuted Christians in Ukraine and Eastern Europe.  The focus was more on Slavic and Greek Christians rather than what we associate today with the terms Near East or Middle East.

We see a similar, expansive and holistic, vision of the East in a recent effort launched by the American nonprofit the Philos Project called the Abraham’s Missing Child Initiative, seeking to “leverage recent developments in the Near East to strengthen and protect indigenous Christians by promoting religious pluralism” (fair warning: I am involved with this initiative and support its goals).[1]

One of the unique and most welcomed features of the Philos initiative has been to include Greece, Cyprus and Armenia in the broader discussion. There is little doubt that the Christians of the Middle East have experienced a bitter century of violence, displacement and repression. Much of the world’s focus – such as it is – has been, for example, on the depredations of extremist groups like ISIS against religious minorities in Syria, Iraq and Egypt.  Those who follow the region more closely would be aware of Iranian inspired violence and repression against Christians, inside Iran, of course, but also in Iraq and Lebanon, perpetrated by Iranian directed death squads. The struggle for survival of Christian communities in the Arabic and Farsi speaking Middle East continues, these communities under tremendous pressure, with the outcome very much in doubt.

But Greece is a NATO and EU member. Cyprus is a member of the European Union as well. And Armenia was for decades a part of the Soviet Union, smothered and oppressed by Soviet Power but certainly not at risk of elimination. Their situation is, on the surface, different from the plight of Christian minorities in Muslim majority countries of the Middle East. And yet today all three of these majority-Christian “European” countries (confusingly, the South Caucasus is seen as an extension of Europe) are very much threatened, on the frontlines of an aggressive ideological and security challenge in the form of Islamist Turkey.  Turkey, also a NATO member and European country, has under Erdogan’s AKP embraced an increasingly intolerant and belligerent political Islam dismissive of non-Muslims internally and non-Muslim states regionally. Kemalist nationalist Turkey was not exactly a good neighbor. The horrific 1955 Istanbul pogrom orchestrated by the government against the city’s remaining Greek population and the 1974 invasion of Cyprus that divided the island was carried out by nationalists rather than Islamists. But today Islamism and nationalism in Turkey combine in an even more ambitious form. Erdogan’s Islamists are allied in government with the neo-fascist MHP of  Devlet Bahçeli.

Beset by economic problems of his own making, President Erdogan and his regime make constant threats directed against all three of these neighbors. On Cyprus, Turkey not only supports the permanent division of the country and has ethnically cleansed the northern part of the island it occupies militarily, it even seeks to prevent Cyprus from exploiting natural gas reserves in its own territorial waters. Cyprus – long before the war in Ukraine – was the only European country whose territory is still occupied by a foreign army.[2]

As for Armenia, Turkey and Azerbaijan orchestrated a bloody war of conquest over the ethnic Armenian enclave of Nagorno-Karabakh (Artsakh) in 2020, but the aggression didn’t end there. Azerbaijan, with Turkey’s blessing has repeatedly sought to landgrab every exposed meter of the Republic of Armenia’s own territory – cutting roads, moving borders, seizing lakes and high points, sniping at soldiers and civilians, engaging in a constant, low-grade campaign of aggression and intimidation. Meanwhile Baku’s dictator, Turkey’s closest ally, threatens to take whatever else he wants of Armenia by force, “whether Armenia wants to or not.”[3]

Meanwhile Armenia seems almost paralyzed as demonstrators seek to bring down a Prime Minister blamed for disastrous leadership in war and peace and for wanting to surrender still more Armenian territory to Azerbaijan.[4]  Prime Minister Pashinyan, elected as a pro-Western reformer in 2018, Pashinyan is caught between aggressive adversaries Turkey and Azerbaijan and a dependence on Putin’s Russia, the only country strong enough and close enough to even minimally deter Ankara’s and Baku’s ferocious ambitions against their despised Armenian enemy.[5]  Azerbaijan’s publicists in the West make much of the charge that Armenia is a Russian satellite but the Armenians have little choice in the matter given such a perilous neighborhood.

While Greece is the strongest of these three frontline Christian states, it too has felt the lash of constant Turkish incitement and threats. Turkey has recently blustered about Greece needing to “demilitarize” Greek islands (that is sovereign Greek territory) close to Turkey.[6] But Turkish incitement is much deeper and longer, with Turkey’s “Blue Homeland” (Mavi Vatan) doctrine, originally promoted by Turkish admirals in 2006 and now more openly embraced by Ankara, calling for expanded Turkish hegemony in the Mediterranean and Aegean Seas, including in Greek and Cypriot territorial waters.[7]  Turkey has also unsuccessfully attempted to use migration flows of desperate people trying to get to Europe as a weapon against Greece.[8]

Turkey’s constant threats and incendiary rhetoric against its neighbors backfired in the Middle East and, coupled with Ankara’s own economic problems, has caused Turkey to give in to Arab adversaries in Egypt, UAE and Saudi Arabia and to Israel.[9] Only time will tell how sincere and lasting is this latest Erdogan policy shift.  The same softening of policy and rhetoric has not yet happened when it comes to Greece, Cyprus and Armenia.  Those that care about the Christians of the East but also those concerned about the sovereignty and survival of small nations threatened by a bully should watch closely what is said and what happens in the Eastern Med and the Southern Caucasus. 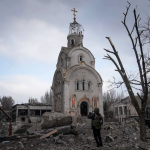 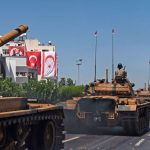