In his seminal essay, The Sorrows of Egypt, the late Fouad Ajami, noted, in his masterful prose, the numerous sorrows of modern Egypt, from the steady decline of its public life, its dependence on foreign handouts, to the deep sense of disappointment that engulfs the country as it rotates between false glory and self-pity  – he concluded his treatise by remarking that “Egyptians who know their country so well have a way of reciting its troubles, then insisting that the old resilient country shall prevail.” The late Arab sage, who professed “approaching the country with nothing but awe for its civility amid great troubles,” concurred with their assessment. “The danger,” he wrote, is not of sudden, cataclysmic upheaval, but of the steady descent into deeper levels of pauperization.”

More than twenty-five years after Ajami’s essay, his words seem prophetic. While Egypt has continued its descent, it has managed to avoid the fate of many of the region’s other countries. No great calamity has befallen the country as it has in Syria and Libya. Egypt’s avoidance of such a fate remains a puzzle. By all measures, the country should have faced a reckoning. The list of Egypt’s troubles is long and would have broken many a country by now. A civil war on its eastern borders, a Jihadi insurgency on its western front, and a revolution and power struggle to its south, Egypt is surrounded by upheaval, and yet the country remains stable. And beyond its immediate surroundings, to the south rises a dam that threatens its source of survival and civilization, the Nile River. Nor are the country’s internal challenges any less grave; the failure of constructing a healthy political life, the monopoly on the public square that an army officer imposes, the identity struggle between Islamists and their nemesis, the sectarian strife that tears its very social fabric, the overbearing presence of its military and its economic empire that stifles the growth of a modern economy, or the simple fact of its population growth limiting any economic gain and leaving the country in a perpetual state of economic troubles.

The country should have been forced by now to face the consequences of its choices. After all, if Egypt’s ship has failed to sink, it is not for lack of trying. The country’s quixotic endeavor to pursue glory, to find a place under the sun for a nation burdened by its glorious past and modern misery, has brought it to the breaking point on numerous occasions. Each of its anointed saviors from Khedive Ismail to Sisi have promised deliverance and only added to the disappointment. And yet, somehow, against overwhelming odds, the ship has continued to float. Even the utter humiliation Egypt suffered in the sands of Sinai during the 1967 defeat had failed to bring about a serious reckoning.

How to understand a ship that never reaches a destination nor sinks? How does one explain the continued survival of a ship that has sailed without oars, a mast or a compass for centuries? Ask the country’s president and he may tell you the answer lies in the heavens. Fond of proclaiming a special connection to the Almighty in his speeches, President Sisi proclaimed less than a month ago that “what is happening in Egypt now is with God’s support, because we are wretched.” Nor is he alone in his belief. No less a religious authority than the Coptic Pope, Tawadros II, frequently repeats that “Egypt is in God’s heart, while all the rest of the world is in his hand.” If the statements sound absurd to the non-believer, or blasphemous to the rational believer, they are nonetheless hardly surprising. The Egyptians’ attachment to the heavens has transcended civilizations and religions. Mohamed Hassanein Heikal, Gamal Abdel Nasser’s mind and pen, once recounted a conversation he had with the French novelist and De Gaulle’s culture minister, Andre Malraux, in which the latter proclaimed “Egypt had invented eternity.”

But if reason and revelation are either incapable or unacceptable as explanations for the country’s avoidance of collapse, perhaps the simple roll of the dice offers another. Egypt seems to have simply been lucky. And not just once, but continuously so. Every time the country is about to face the abyss, an outside event or actor has willingly or unwillingly saved it from disaster.

Take the year 1990, hardly the worst date in Egypt’s modern history, and yet a simple listing of the country’s woes at that moment leaves one perplexed by its avoidance of disaster. Economically, the country was in a state of crisis. There was slow economic growth during the previous decade coupled with limited income from tourism and remittance from Egyptians working abroad due to Islamist violence and an Arab boycott respectively. Payments for the foreign debt the country had accumulated were nearly breaking the state’s budget. The uninspiring army officer, Hosni Mubarak, sitting at the ship’s helm since the assassination of his predecessor had failed to connect with the country as Ajami noted. The regime was in a state of war with an Islamist insurgency amassing in the country’s southern governates. To make matters worse, relations with Egypt’s benefactor, the United States were at a low point following the Achille Lauro incident and Egypt’s flamboyant Defense Minister Abdel Halim Abu Ghazala’s involvement in illegally smuggling missile parts from the United States as part of a missile project with Iraq and Argentina. How did Egypt overcome those odds? One thousand miles away, Iraqi tanks rolled over the border and invaded Kuwait allowing Mubarak to emerge as a key partner with the United States and leading to an influx of aid from both the West and the Gulf states. The Gulf War would give the Egyptian regime another twenty years.

But if Mubarak got lucky once, Sisi seems to be on a winning streak. As the Egyptian proverb goes “a pound of luck is better than an acre of cleverness,” and Sisi has definitely received more than a pound. Take the conflict with Ethiopia. Taking advantage of the disruption caused by the revolution in Egypt in 2011, the Ethiopian government proceeded with the dam project, leaving Cairo with little recourse to stop it. The country tried everything; an attempt to reach an agreement with Ethiopia, the threat of an armed attack on the dam, mediation by the African Union, an appeal to the UN Security Council, and even the intervention of a sympathetic Trump administration, but nothing worked. Ethiopia was riding a wave of international excitement following Abiy Ahmed’s selection as Prime Minister – an excitement that reached the absurd in awarding him the Nobel Peace Prize in 2019. Two years later, Ethiopia is engulfed in a ferocious civil war that has led to serious accusations of grave human rights abuses and massacres with the reputation of the country’s leadership in shambles.

Or turn your gaze to Egypt’s troubled eastern neighbor. After heavily investing in Libya’s warlord, Khalifa Haftar, Egypt’s gamble seemed to backfire as his forces failed to capture Tripoli. The standstill soon turned into a near rout as Turkey began sending troops into Libya to back its allies. Sisi was forced to declare a red line in Libya’s western provinces, threatening military intervention if that line was crossed. The prospects of Egypt in a military confrontation with Turkey hardly seemed promising. A year later, facing both economic troubles and conflicts with all of his neighbors, Turkey’s President was forced to look for ways to mend relations with Egypt reaching an agreement on Libya and forcing the Muslim Brotherhood television channels airing from the country and which had been causing headaches for the Egyptian regime to scale down their political content.

Or examine Egypt’s relationship with the United States. After enjoying four years of unequivocal support from the Trump administration, the Egyptian regime was aghast at what a Biden administration would mean to the strategic relationship, especially as the new administration proclaimed its commitment to human rights and candidate Biden singled out Egypt in his criticism. After a few tense months, Egypt was saved by war breaking out in Gaza, forcing the Biden administration to reach out to Egypt for mediation. Today, while Washington still maintains its commitment to human rights and democracy, geo-political realities have made any real pressure on Cairo unlikely.

Nor has Sisi been any less lucky with his internal troubles. The Muslim Brotherhood, the once feared Islamist organization that through its hundreds of thousands of cadres could mount a challenge to the regime, is today a shadow of its old self. Instead of devising a strategy to challenge Sisi, and utilize the discontent and disillusionment that inevitably followed his rise to power, the organization is torn apart with its competing camps busy issuing electronic messages denouncing their internal rivals.

Inside Egypt, luck is, naturally, never mentioned as an explanation. Instead, it is the wise leadership of Sisi that has forced the world to its knees. The man had promised Egyptians that their country would be as great as the world and his propaganda machine continues to feed Egyptians that narrative. In explicit stories or hints, Egypt’s disinformation campaign proclaims that it is Egypt’s intelligence services that are responsible for Ethiopia’s and Turkey’s troubles, and Egyptians are quick to believe in their fables. The allure of false glory, that Ajami warned of, is impossible to ignore in a country where the pyramids stand as a constant reminder of its modern failures.

How long will the luck of Sisi and Egypt run? Certainly, the outside observer will conclude that the country’s troubles and failures will catch up to it. Surely, at one moment in the future, Egyptians will need to come to a reckoning with the outcomes of their choices. Perhaps. As Egypt’s Nobel laureate Naguib Mahfouz wrote in his autobiography, “I asked Sheikh Abd Rabbo: How will the ordeal we suffer end? He replied: If we come out safely, it is mercy, and if we come out perished, it is justice.” 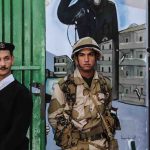 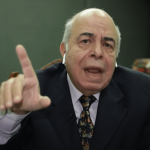