The Cairo Institute for Human Rights Studies (CIHRS) asserts that the recent amendments ratified this month by President Abdel Fattah al-Sisi aim to entrench a permanent state of emergency in Egypt. On 11 and 22 November, Sisi ratified amendments to Law 58 of 1937 on the penal code[1], Law 94 of 2015 on counterterrorism, and Law 136 of 2014 on the protection and security of vital and public facilities[2]; the laws entered into force on 23 November 2021.

These latest amendments belie the president’s declaration in October that the state of emergency would be lifted and not renewed. They further represent a continuation of the repressive groundwork that has been laid for years—even before the official declaration of a state of emergency in April 2017—in the form of security practices inimical to the law and constitution alongside the adoption of draconian laws underpinned by the logic of exception.

Since his initial declaration of a state of emergency in 2017, Sisi had issued multiple decrees renewing the state of emergency in the country, in flagrant violation of Egypt’s constitution, which provides in Article 154 for a three-month period of emergency only, renewable once. With the collusion of a parliament that has acted as a rubber stamp on legislation enabling the executive’s usurpation of power, the constitution was continually subverted by declarations of a new emergency state shortly after the previous one’s expiry, over a period of four years. Most tellingly, despite his announced lifting of the state of emergency in a dramatic[3] statement on 25 October 2021,  Sisi did not repeal the exceptional laws enacted and enforced even before the initial 2017 emergency declaration, which themselves began laying the foundations for an exceptional legal system not subject to accountability or civilian oversight.

The day after Sisi’s 26 October announcement, the Cairo Institute for Human Rights Studies and seven independent rights organizations issued a joint statement[4] explaining that the state of emergency in Egypt is not primarily based upon the specific emergency law (Law No. 162 of 1958) regulating it, but is instead effectively enforced through an arsenal of legislation circumscribing rights and freedoms, including the recently amended counterterrorism law and the law protecting public facilities.  The organizations also emphasized the dangerous lack of accountability, particularly for executive officials who enforce the law, and the negligible impact of suspending exceptional emergency state security courts so long as ordinary courts commit the same due process violations. This is part of a systematic erosion of the ordinary justice system and the shameful normalization of prosecuting civilians in military tribunals under the law to protect public facilities, which was codified in the constitutional amendments of 2019.

On 31 October, a week after the president’s announcement of the emergency state’s lifting, the House of Representatives approved amendments that effectively codify and cement a permanent, ongoing state of emergency; thus exposing Sisi’s theatrical public repeal of the emergency law as superfluous, no more than a public relations ploy seeking to counter the international community’s mounting criticism of the Egyptian government’s abysmal human rights record. These legislative changes will allow more civilians to be referred to military courts, further erode guarantees for a fair trial, and place additional restrictions on freedom of expression and academic freedom.

In the following analysis, CIHRS reviews the most significant aspects of the amendments ratified by the president, which entered into force on 23 November 2021.

1 – Amendments to the counterterrorism law: Harsher penalties than the emergency law

CIHRS believes that the changes to Law 94 of 2015 on counterterrorism —which was already the object of widespread criticism by rights advocates[5]—will turn the exceptional state of emergency into a permanent and regular reality in Egypt. In responding to critics of the amendments, the head of the parliamentary Defense and National Security Committee reportedly said, “These amendments do not make this an exceptional law. After they’re approved, it will be permanent.”[6]

The amendments introduced Article 32(bis) to the counterterrorism law, which is more draconian than the corresponding section of the emergency law (Law No. 162 of 1958). Whereas the latter provides for a fine of 4,000 Egyptian pounds, the new article provides for imprisonment and a fine of up to 100,000 pounds for any person who violates counterterrorism measures taken by the president. The article further provides for prison and/or a fine of at least 20,000 to no more than 50,000 pounds for violating presidential measures with no specified penalty; Article 5 of the emergency law carried a maximum six-month jail sentence and a fine of no more than LE50 for the same crime.

The following table shows the differences between Article 32(bis) of the counterterrorism law and Article 5 of the emergency law.

In addition, Article 53 of the counterterrorism law permits the president, in the event of the threat of a terrorist crime or ensuing environmental disasters, to take measures to maintain public security and order, including by quarantining or evacuating some areas or imposing a curfew in them for a maximum period of six months (renewable). In contrast, Egypt’s constitution provides for a maximum three-month state of emergency.

Article 36 of the law was amended to increase the fine for reporting on terrorism trials without the permission of the presiding judge from 100,000 to 300,000 LE. This contravenes the principle of public trials enshrined in Article 187 of Egypt’s constitution.[7] Moreover, it gives improper license to make already exceptional court proceedings secret, infringing upon the press and the public’s right to know about these proceedings and thus exercise oversight over the judiciary.

CIHRS believes that this amendment reflects an attempt to further conceal the pervasive violations of due process in courtrooms throughout Egypt. Due process violations and flaws have become increasingly common with the formation of specialized terrorism circuits and the use of military courts to enact reprisals on those whose exercise of free speech is perceived as critical of the president or state.

2 – Amendments to the law on the protection of public facilities: Tacit support for the referral of civilians to military tribunals

A new article was added to Law 136 of 2014 on the protection of public and vital facilities to “repeal any provision contravening the provisions of this law.” In effect, the amendment repeals Article 3 of the law, which set a two-year limitation on the enforcement of the public facilities law, thus turning the exceptional, temporary statute into a permanent law.

Originally enacted by the president in October 2014, rights organizations at the time described the law on protecting public facilities as an unconstitutional attempt to entrench an undeclared state of emergency.[8]Under Article 3, the law was supposed to be in force for a period of two years, until 2016; in August 2016, the president issued a decree extending enforcement of the law for an additional five years.[9]

On 31 October 2021, the House of Representatives passed another amendment to the law, allowing the armed forces to continue to assist police in protecting public and vital facilities without specifying any time limit. Furthermore, the amendment provided for the continuation of the referral of civilians to military rather than ordinary courts for all offenses committed while the armed forces are securing such facilities; the amendment places no geographic or time limit on this provision. In a report, the parliament’s Defense and National Security Committee and Constitutional and Legal Affairs Committee justified the amendment by calling it “a constitutional entitlement,”[10] in a brazen mockery of both the public and the law.

With its infringement of defendants’ rights, its disregard for due process guarantees, and its greenlighting of the prosecution of civilians in exceptional military tribunals rather than ordinary courts, the law on the protection of public facilities contravenes Article 14 of the International Covenant on Civil and Political Rights. In addition, the definition of facilities subject to military protection is overly vague and broad, applying to any facility deemed to be “public and vital.” As such, the law effectively expands the jurisdiction and authority of the military justice system at the expense of the civilian one, in yet another shameful episode in the progressive deterioration of the Egyptian judiciary over the last eight years.

The most recent package of legislative amendments also amended Article 80(a) of the Penal Code on the disclosure of state secrets, increasing the fine for offenders a hundredfold from a maximum of 500 to 50,000 Egyptian pounds while retaining the maximum jail sentence of six months. The amendment further made the crime of attempted disclosure the equivalent of the completed crime, applying the same penalty to both.

The amendments created a new crime as well: gathering data or statistics or conducting research about the armed forces without a permit from the Ministry of Defense. This crime also carries a penalty of a maximum six-month jail term and/or a fine of up to 50,000 pounds. This revision places additional restraints on academics and researchers in Egypt, particularly when it comes to the economy, which is rife with corruption and throughout which the armed forces have extensive interests and activities. Some scholars have even asserted that the armed forces are the biggest investor and single largest landowner in Egypt[11]—a conclusion that merits additional research and analysis

CIHRS is certain that President Abdel Fattah al-Sisi’s most recent legislative amendments, which entered into force on 23 November 2021, will not only entrench a permanent, undeclared state of emergency in Egypt, but will also give additional legal cover to human rights crimes and abuses in a country that has been run in the total absence of the rule of law for the last eight years.

[7] Article 187 states, “Trial proceedings shall be public unless the court declares them to be closed in consideration of the public order or morals. In all cases, the judgment shall be pronounced in open court.” 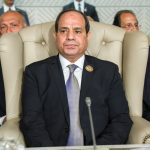 The Luck of the PharaohsSelected Opinion