It is the will of our Heavenly Father that, as we live the joy of the Resurrection of Christ this year, we carry in our hearts the pain of the brutal martyrdom of the 62-year-old Copt Nabil Habashi Salama. Mr Salama was kidnapped in November 2020 from his home town of Bir al-Abd in North Sinai by Daesh, also known as Islamic State (IS). On 18 April 2021, the Islamic group’s site posted video footage showing the execution of Mr Salama. The man was filmed citing his full name and trade, and saying that he had been captured three months and 11 days earlier [which means that he was executed in March 2021]. This was followed by other footage showing Mr Salama, with his hands tied up and three masked men surrounding him; their leader gave a word heavy in Islamic rhetoric and threats to Copts, then shot Mr Salama in the head.

This is not the first time that our joy for a religious feast is marred with pain. But the agony never fails to generate a pause of contemplation that ultimately gives the events meaning and dimension which far outweigh the pain and frustration, and which yield comfort and strength.

Mr Salama deserves indeed to be called blessed; he has been crowned with the heavenly joy and the glory that has awaited martyrs since the beginning of Christendom. His earthly family has shown that they live their loss through deep faith; faith that enables them to rise above the pain and grief, and focus on the joy of Heaven as it welcomes a new righteous soul.

As to us, the martyr’s bigger family: his Church and his Coptic countrymen—Christians together with Muslims—our stance is firm and unwavering in the face of terror. We are armed by our love for Egypt and our unity in the face of any crimes committed against it. True, retribution was swiftly meted by our valiant Egyptian security forces; directly following the airing of the video footage that showed Mr Salama’s execution the Egyptian security forces pursued the terrorists responsible for the heinous crime and killed three of them. But this is earthly retribution. We look up to our crucified Christ as He prayed for his executioners: “Father, forgive them, for they do not know what they are doing”, (Luke 23: 34)

We are truly grateful for and proud of the solidarity and support expressed by our fellow Muslims who rejected the terrorist threats against Copts, and insisted on offering us their unalloyed support. Among the many messages to that effect, there was one which I found especially expressive : “We are 100 million Egyptians…when needs be we are all Muslims…and when need be we are all Copts…Kill us all if you can…Long live Egypt and her mindful people.”

I find comfort in all that, and live the joys of the Resurrection. I extend my best wishes to the pastor of the Coptic Orthodox Church Pope Tawadros II and to all the archbishops, bishops, Church clergy and congregation. I also extend my heartfelt wishes to the heads of Churches in Egypt, as well as to their clergy and congregations. I pray the Lord to protect our nation against all harm. 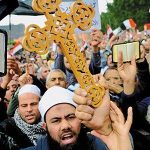 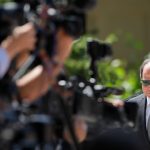