Special Rapporteur on the Sale and Sexual Exploitation of Children, Including Child Prostitution, Child Pornography and other Child Sexual Abuse Material

On the theme: No One Left Behind: Stemming child, early and forced marriages and conversions of minority women and girls.

I read recently a harrowing news report of a 12-year-old girl from a religious minority who was allegedly kidnapped, forced to marry her abductor and forcefully converted to another religion. As the Special Rapporteur on the sale and sexual exploitation of children, I find it very disturbing that any person let alone a child can be abducted, forcefully married and or converted to another religion under duress with impunity.

UNICEF estimates that at least 12 million girls are married off before the age of 18 years which translates to 28 girls every minute.

We know that the early and forced marriages of children is a violation of human rights. It prevents children from living their lives free from all forms of violence with wide ranging and adverse consequences, because child marriage disproportionally affects girls. It compromises a girl’s development by resulting in early pregnancy and social isolation, interrupting her schooling and limiting her opportunities for career and vocational advancement. We also know that it occurs for a number of reasons including gender inequality, poverty, insecurity and tradition. International legal instruments such as the Universal Declaration of Human Rights, UN Convention on the rights of the Child and the Convention on The Elimination of all Forms of Discrimination against Women provide the cornerstone in the fight to highlight child marriage as an abuse of human rights, yet the practice of early or forced marriage has proven extremely difficult to eradicate since it is a problem that stems from several intersecting socioeconomic and cultural factors and is therefore deeply embedded in some communities.

Compounding this problem is the disturbing phenomena of forced conversion of girls from minority groups. Conversion is an absolute right that any person can freely convert from one religion to another or convert back at any time as s/he decides so. Any person can also decide not to adopt any religion or belief.

When the conversion is made under duress it becomes a violation of human rights. International law prohibits any form of coercion that would impair the right to have or adopt a religion or belief, including the use of threat of physical force or penal sanctions to compel believers or non-believers to adhere to their religious beliefs and congregations, to recant their religion or belief or to convert; this includes policies or practices having the same intention or effect, such as, for example, those restricting access to education, medical care, employment or other rights.  A girl who is a double victim of a forced marriage and forced conversion may experience conditions inside the marriage which meet international legal definitions of slavery and slavery-like practices including servile marriage, sexual slavery, child servitude, child trafficking and forced labour.

In the 2009 report of the SR on freedom of religion and belief to the GA, it was documented that girls were allegedly abducted by members of a different religious community forced into marriage and forcefully converted. She emphasised on the fact that no one should be subject to coercion which would impair his or her freedom to have or to adopt a religion or belief of his or her choice and that the betrothal or marriage of a child shall have no legal effect.

International legal instruments such as  International Covenant on Civil and Political Rights, Convention on the Rights of the Child, 1981 Declaration on the Elimination of All Forms of Intolerance and Discrimination Based on Religion or Belief on this issue are very clear,  the right to freedom of thought, conscience and religion protects, without discrimination, the right to have or to adopt or to change a religion or belief of one’s choice; unconditional freedom from coercion; the right to manifest one’s religion or belief, either individually or in community with others; and the liberty of parents and guardians to provide a religious and moral education for their children in accordance with their convictions and the evolving capacities of the child. Other than the gross violation of international human rights law, conversion under duress to another religion not only affects the child psychologically and emotionally but it is also disruptive to religious harmony and peaceful co-existence within communities and this fosters violence and civil unrest.

The Convention on The Rights of The Child which is one of the most widely ratified international treaty is very clear on the need to protect children from all forms of physical or mental violence, injury or abuse, neglect or negligent treatment, maltreatment or exploitation, including sexual abuse. The protection of children is every body’s responsibility especially state parties to this convention and protection should be absolute irrespective of who the child is and what minority group she belongs to.

Furthermore, the Special Rapporteur on freedom of religion and belief in his 2020 report to the General Assembly, aptly posited that; “The people most likely to be left behind by development are often those who endure discrimination and exclusion on the grounds of identity – often multiple identities – including religious or belief identity. Such discrimination can be particularly acute in situations where persons identify with a religion or belief group that is numerically inferior to the rest of the population and/or in a non-dominant position in a given society.” This statement could not be stressed more in these circumstances. That is why it is imperative that Governments and State Parties to the afore mentioned international legal instruments enact laws that criminalize forced conversion through forced marriages of children.

At this juncture, I would like to commend the Jubilee Campaign for organizing this event to shine a light on these horrifying crimes perpetuated against minority women and girls to inter alia help policy makers and others understand the vulnerabilities religious and ethnic minority women face and in so doing provide recommendations on how to address them.

Given however the nature of these crimes, legislations alone may not be sufficient to address this problem. Data collection is a necessity to determine the extent of the problem to enable targeted intervention. Raising awareness and education is also key to promote tolerance and tackling discrimination against religious minorities. The Special Rapporteur on freedom of religion and belief in the same report of 2020 proposes structural indicators to appraise the extent to which legal and institutional frameworks within a state incorporate international human rights obligations and can be indicative of discrimination. He suggests that process indicators should enable verification of a State’s efforts to operationalize its human rights commitments by way of policies, procedures and practices, which makes it possible to examine the State’s exercise of its duties beyond law-making, to include, for example, the accessibility and inclusivity of mechanisms for rights- holders to report violations of human rights, the provision of human rights training to State officials, or government support for relevant non-State actors who have roles in implementing human rights. Protecting freedom of religion or belief and eliminating discrimination in practice, according to the Special rapporteur, may also require special measures in programming and capacity-building to address the specific concerns and needs of individuals and groups who exist at the margins, such as minority religious or belief communities.

In light of the above, my mandate will reach out the mandate of the special rapporteur on freedom of religion and belief to support advocacy efforts to stem child and forced marriages and conversions of minority women and girls.

I wish you all a very fruitful deliberation on this very important topic and thank you all for your kind attention. 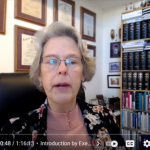