Egypt’s arrest of a long-sought Muslim Brotherhood leader Aug. 28 is sure to create new challenges for the Islamist group. Acting General Guide Mahmoud Ezzat, 76, was arrested Aug. 28 after years in hiding.

Egyptian police found him in his hideout apartment in a posh district in New Cairo. Police confiscated a number of computer devices, cellular phones with encrypted programs, and documents which include plans for terrorist attacks, Egypt’s Ministry of Interior said in a press statement. The statement described Ezzat as “responsible for handling the organization’s (MB) funds and providing it with financial support as well as financing all its activities.”

The charges claim he masterminded terrorist attacks after the June 2013 revolution forced the Muslim Brotherhood-led government from power.

For Egyptian security, Ezzat’s fall generates a wealth of information on the whereabouts of the Brotherhood’s splinter cells, such as Hasm and Liwa Al Thawra, both of which the United States designated as terrorist organizations. Hasm has carried out 14 terrorist attacks in Egypt and more than 304 suspected members have been arrested and sent to military courts. Liwa Al Thawra was involved in several assassinations of police and army officers.

Ezzat is no stranger to prison, having first been tried in 1965 as part of a group following Muslim Brotherhood ideologue Sayyid Qutb. Qutb was executed in 1966 while Ezzat received a 10-year prison sentence for joining a group that aimed to topple the government through violence. He was served five years in prison in 1995 for his role in the Brotherhood’s guidance bureau.

Before his latest arrest, Ezzat already faced a death sentence after being convicted in absentia for plotting the 2015 assassination of Egypt’s General Prosecutor Hisham Barakat. He is also accused of plotting the bombing of a Cairo cancer medical center last year killing 20 people and injuring 50 more.

The government’s evidence linking Ezzat to the attacks is not likely to be seen before his trial.

Additionally, he is charged with leading the online Brotherhood brigades accused of spreading rumors and Muslim Brotherhood propaganda in the country. He is set for retrial for all convictions now, according to Egyptian law, since the convictions were obtained in a trial held in absentia.

General Farouk Al Maqrahi, a former top official in Egypt’s Interior Ministry, described Ezzat as “the most dangerous of the Brotherhood militant apparatus.” “Mahmoud Ezzat controlled the group (MB) and his capture breaks its power.”

Some Egyptian MPs believe the arrest is a significant blow, with one calling Ezzat a “precious catch.”

While most of the Brotherhood’s senior leaders either fled the country or were arrested after the June 2013 revolution, Ezzat’s whereabouts remained a mystery. Rumors placed him in Gaza, or claimed he died in Turkey. But Egyptian authorities traced some calls and were confident he was still in the country. “He never stayed in one house more than a month,” said security expert Mohamed Nouraldin.

The Muslim Brotherhood condemned the arrest as an abduction. Its statement claimed that, despite the arrest of its leader, Brotherhood “actions are proceeding regularly and that it will remain steadfast on its principles, continuing on the path of its call for wisdom and good preaching in the service of its homeland and religion, without stopping, hesitating or reverence.”

But Ezzat’s capture presents a major succession dilemma for the Muslim Brotherhood. The situation exacerbates an ongoing internal generational feud. A number of the group’s younger members complain the elders don’t include them in decision-making, and accuse them of neglecting young Brotherhood prisoners who followed the leaders’ orders.

When Badie was arrested, fugitive Brotherhood leaders – including Ezzat – declared him unfit to lead the group based on a fatwa that was traced to notorious Al Jihad leader Omar Abdel Rahman. A captive, he argued, cannot be the group’s leader.

The Brotherhood’s deputy guide is the 83-year-old London-based Ibrahim Munir. His age and location make him a less than ideal candidate because of the generation gap between his old guard and younger Brotherhood members.

Evidence of the internal strife came as Muslim Brotherhood cleric Essam Tleima blamed “the historical leaders” of the Brotherhood, including Munir, General Secretary Mahmoud Hussein and Deputy Secretary of the International Muslim Brotherhood Organization Mahmoud al-Ebiary and other senior leaders for giving up Mahmoud Ezzat to the Egyptian police. Tleima blamed Munir for refusing all forms of reconciliation between the leaders of the group and accused them of dividing up the group’s ranks and fabricating statements on behalf of Mahmoud Ezzat. “Who disbanded the Crisis Bureau? Who broke the Brotherhood’s alliance for legitimacy? Who destroyed the Revolutionary Council? Who rejected [the] initiative of [Brotherhood cleric Yusuf] Al Qaradawi? Who rejected the initiative of the Brotherhood MPs?” Tleima asked. “Mahmoud Hussein, Ibrahim Munir, Mahmoud Ibiary and Mohamed Beheiry.”

While many Brotherhood leaders are still fugitives and operational in countries such as Turkey, the United Kingdom and Qatar, the capture of Ezzat, the terrorist operations mastermind, is a major blow to the group. It is perhaps the biggest arrest by the Egyptian police since General Guide Mohamed Badie was apprehended in August 2013, and it calls the group’s future into question.

Hany Ghoraba is an Egyptian writer, political and counter-terrorism analyst at Al Ahram Weekly, author of Egypt’s Arab Spring: The Long and Winding Road to Democracy and a regular contributor to the BBC. 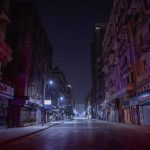 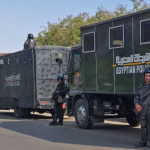